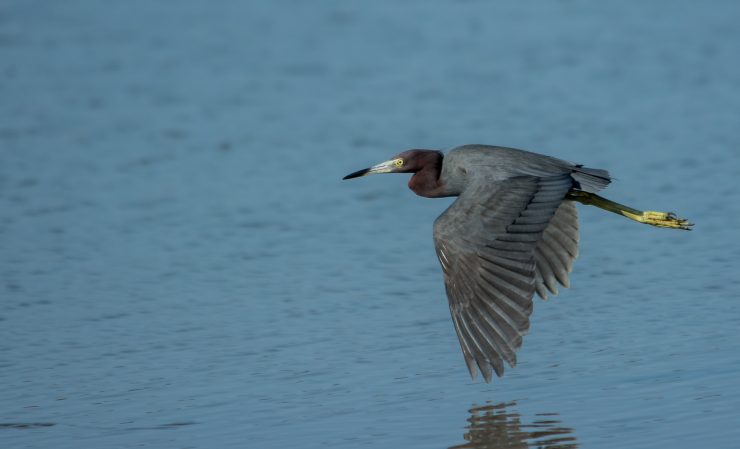 Little Blue Heron is a bird which belongs to the family of Ardeidae and the order of Pelecaniformes, its measure around 62 centimeters.

Its body is predominantly slate blue with its head and reddish brown neck. The bill is bluish gray with the black tip. The juveniles are totally white, sometimes with blue spots, with the bill just like the adults and the green legs.

This species is distributed from Massachusetts to Florida in the United States and from the bay of Mexico to Uruguay through the West Indies, Central America, Colombia, Peru, Ecuador, Bolivia, Venezuela, Chile and Brazil. In Colombia it is found up to 2600 meters above sea level on the Atlantic coast, also in Santander, Cauca, Antioquia, Valle del Cauca, Vaupés, Amazonas, Boyacá and the savanna of Bogotá.

It is a bird that can be seen alone or in groups of 2 or 3 individuals. It seeks food while walking slowly following groups of ibis and manatees. The populations of the United States migrate in winter to the warm areas of the Caribbean, Mexico and northern South America.