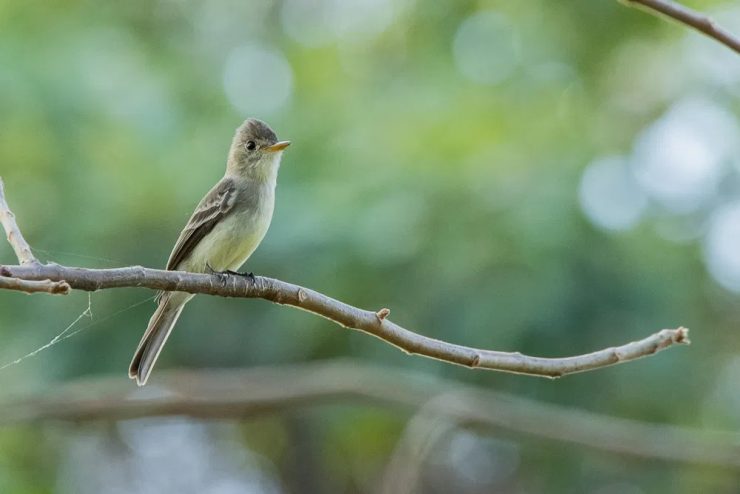 The size of the bird is 13.5 to 14 cm and weighs between 13 and 18 g. It is a small bird that is easily confused with other species of the Elaenia genus. It has a small crest with a semi-concealed white patch on the crown (1), the upper parts are grayish brown, it has a narrow eye ring (2), the wings are dark with two wing bars and the margins of the feathers whitish in color, the cheeks are whitish, the throat is greyish and olive in color on the high chest; the sides, flanks, the center of the lower chest and the abdomen are whitish with a faint pale yellow hue, the legs are black, the iris is dark brown and the bill is black with the base of the lower jaw of meat color.

Both sexes are similar. The immature (3) does not have white on the crown, it is more brown on the upper parts and on the wing bars.

It is found from Costa Rica to the Northwest of Argentina and Brazil; in Colombia it is in the Sierra Nevada de Santa Marta, the Serranía de Perijá, in the Central and Eastern Cordilleras, also towards Meta and Caquetá, in the Western Cordillera in Valle, Cauca, probably in Antioquia and in Nariño. It is up to 2,200 m high.

Present in mountain pastures with the presence of scattered shrubs and trees, crops, open areas with bushes.

It feeds mainly on berries and insects; It usually forages solitary or in pairs making short flights from perches covered by foliage.

Although the species is tolerant of disturbed and secondary environments, the population is thought to be declining due to continued habitat destruction from fire, ranching and extensive agriculture, and selective logging and burning.

Its population density has not been quantified, but the species is classified as «common» (Stotz et al. 1996), it is considered as of least concern

He has a fast and incessantly repetitive song at dawn «a ui d´di di» also makes different soft and whiny calls, like «uiib» or «biibzb» or more buzzing like «chibu» yuibu «friii» or «fiii»