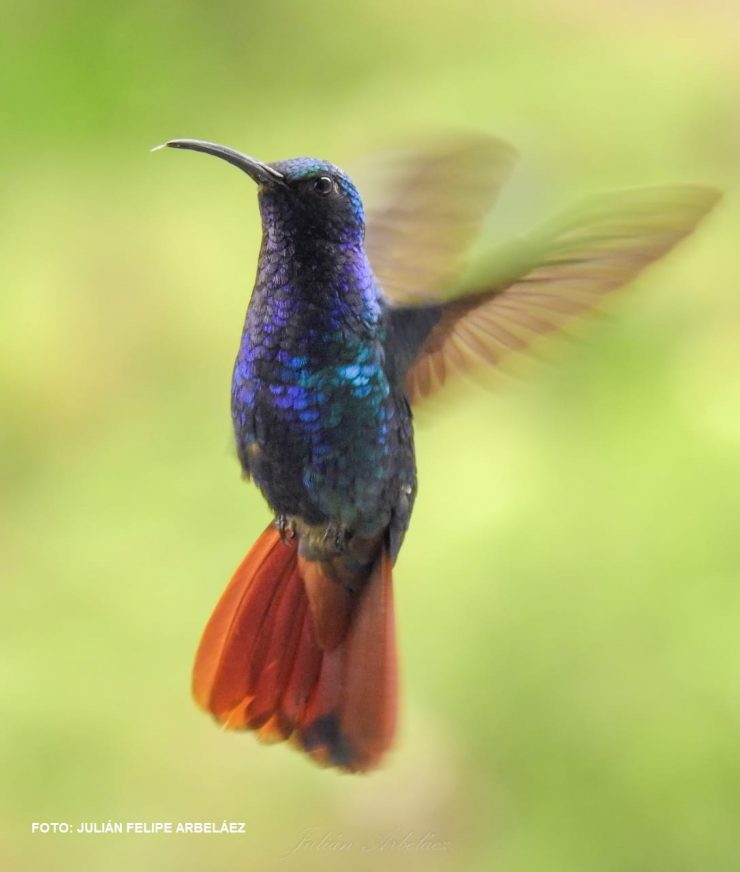 This hummingbird is an inhabitant of humid forests on the eastern slope of the Eastern Cordillera and the Serranía del Perijá, less known in the Western and Central Cordilleras. Its name Campylopterus means curved wings and derives from the Greek roots kampulos = curved and pteron = wing.

It measures 11.4 cm and has a markedly curved and robust bill of approximately 28 mm. Male is entirely iridescent green on top, throat and chest are iridescent violet-blue, which gradually changes to blue-green on the belly. Its infracaudales and tail are rufous brown in color and it has 4 central rectrices, mainly dark green or with dark green tips, the rest are rufous brown sometimes with blue black tips. Female is bright green above with large white postocular spot. Their underparts are mainly uniform gray in color. It has an iridescent bluish throat bordered on the sides by a grayish-white malar line. It has green discs on the sides and flanks and mainly green central rectrices. The rest of the tail is like that of the male.

It is distinguished from other hummingbirds by its curved beak and extensive rufous chestnut on the tail.

It is found from the north-central coast of Venezuela through the eastern Andes of Colombia to northeastern Ecuador. In Colombia it is found mainly from 900 to 2600 m above sea level in the Serranía del Perijá, on the northern slope of the Sierra Nevada de Santa Marta, on the eastern slope of the Eastern Cordillera from the extreme south to the department from Caquetá and on the western slope to the headwaters of the Magdalena River at the height of San Agustín. It is also found on both slopes of the Eastern Cordillera from Norte de Santander to Cundinamarca and has been recorded in the Bremen Nature Reserve in the municipality of Filandia – Quindío and the northwestern end of the Western Cordillera below the National Park El Paramillo. Probably also in the extreme north of the Central mountain range. Yesterday it was recently registered near the Rioblanco reserve in the municipality of Manizales, becoming a new registration for the city, expanding the species’ distribution range. The register was made by Julián Felipe Arbeláez.

They frequently hunt insects, among which Hymenoptera and Coleoptera have been recorded.

Males in reproductive condition and females have been recorded laying eggs in the month of June in the Serranía del Perijá. Other aspects of their reproductive biology are unknown.

It forages at low altitudes and during periods of full sun it usually seeks shady spots.

In the international arena it is considered a kind of minor concern.