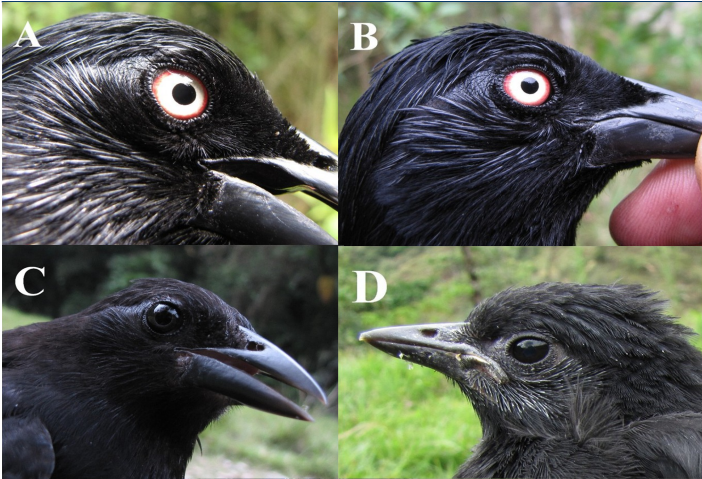 Abstract
We describe overlooked patterns and age-related variation in the iris coloration of the Red-bellied Grackle (Hypopyrrhus
pyrohypogaster), a range-restricted threatened species of the Colombian Andes. Whereas adults exhibit a bicolored paleyellow/scarlet red iris, juveniles show a dark iris, ranging from dark brown to grayish brown. In addition, we report the first
case for a Neotropical species of temporary heterochromia iridis, an uncommon phenomenon in birds, from recaptures of a
female Red-bellied Grackle in 2010. Our observations suggest that this case of heterochromia may be related to stress and
changes in blood flow to the eye.

Introduction
Among the external phenotypic traits of birds, iris
coloration is perhaps the most mechanistically
complex and one of the least understood (Prum
2006). Iris coloration can be produced by structural elements as well as pigments (Oehme 1969,
Ferris & Bagnara 1972, Prum 2006), notably pteridines and purines in brightly colored irises
(Oehme 1969, Oliphant 1987, Oliphant & Hudon
1993). Iris color can vary greatly within a population (Craig & Hulley 2004). In some species, this
variation distinguishes the sexes and age classes
(Hudon & Muir 1996), which implies individual color variation (Selander 1958, Hardy 1973, Scholten
1999). The histological basis of aging and the
changes in iris color in an individual have been described in detail for few species (e.g., Sweijd &
Craig 1991). Rarely, an individual bird will have different iris colors in each eye. This condition of unequal pigmentation of the eyes in an individual,
heterochromia iridis, is frequently associated with
pathology, although Bond (1912) demonstrated
that a significant proportion of cases are congeni-
tal and unassociated with any evidence of disease.
Occasionally individual birds are reported with
abnormal eye coloration (Dias et al. 2009) with important implications for identification (Mckee &
Jaramillo 1999, Boano & Janni 2008), but cases of
individuals with heterochromia iridis are rarely reported in the literature (F. Hayes, pers. comm.).
The Red-bellied Grackle (Hypopyrrhus pyrohypogaster) is a threatened endemic icterid of the humid montane forests of the Colombian Andes
(Cadena et al. 2004, Ocampo et al. 2012). Little is
known about phenotypic variation and demography of this threatened bird. Here, we describe the
iris coloration and report a case of temporary heterochromia iridis in the Red-bellied Grackle. Age
classes can be distinguished in the field by plumage characteristics and iris coloration in this species, and adults can be sexed in the field due to
conspicuous differences in size (Ocampo et al.
2012).

During two breeding seasons (2010-2011) we
used mist-nets to capture Red-bellied Grackles as
part of a long-term project on breeding biology
initiated in 2006 (see Ocampo et al. 2012). The
study area comprises second growth forest, pastures with isolated trees, semi-open areas at different stages of succession and forestry plantations,
located at Alto San Miguel, Caldas, Antioquia, Colombia (06° 02′ N, 75° 37′ W; 1800-2100 m elevation).
We captured juveniles, adults and nestlings. All individuals were measured and marked with a combination of two plastic color bands to identify
them and reproductive groups. We recorded iris
color of both left and right eye, and all individuals
were photographed. For recaptured individuals we
only remeasured their weight. We captured 22
Red-bellied Grackles, consisting of 18 adults and 4
fledglings at least 8 weeks old. Additionally, we
banded 23 nestlings in nine successful nests.
Results

All adults captured and observed at Alto San Miguel irrespective of sex exhibited bicolored irises,
consisting of a pale yellow center surrounded by a
sharp scarlet red margin (Fig. 1a,b,e). This pattern
does not differ from other localities where we have
observed or captured adults of this species (e.g.,
Cuervo et al. 2008). The bicolored iris, and particularly the red outer margin, is conspicuous in live
birds (Fig. 1a,b), but changes rapidly after death.
We have collected adult Red-bellied Grackles in
previous studies (e.g., Cadena et al. 2004) and
have noticed a post-mortem change in the tone
and extent of the red margin to a faint brownish
color. The nestlings and fledglings of three months
of age had a dark iris, ranging from dark brown to
grayish brown (Fig. 1c,d), and we presume that the
bicolored iris is acquired between 8 and 12
months of age.
On 28 April 2010, we captured an adult female
with bicolored irises in both eyes, but whereas the
tone of the yellow of her left eye looked typical,
that in her right eye was abnormally intense (Fig.
2). The color difference between eyes remained
while the bird was handled and released. One
month later, on 27 May 2010, the bird was recaptured and had both irises with the typical coloration in both eyes (Fig. 1a). This individual, banded
as a nestling on 7 May 2006, was four years old at
the time of capture. The individual has been characterized as an active member in its reproductive
group for four breeding seasons, helping to feed
and take care of the nestlings and fledglings. This
female had an otherwise typical morphology, and
no other captured bird showed such abnormalities
in eye color.

Discussion
The iris color of the Red-bellied Grackle is reported in the literature as “yellowish white” (Hilty &
Brown 1986), “straw yellow” (Ridgely & Tudor
1989) or “pale yellow” (Fraga 2011). These inaccurate descriptions in the literature may have originated from old museum specimen tags since collectors could have easily overlooked this pattern if
detailed soft part coloration was not promptly recorded, as it is customary in modern ornithology. It
is possible that the red coloration of Red-bellied
Grackles’ eyes is hemoglobin-based (see below).
Heterochromia iridis is rarely observed in birds. In
two gull species, Herring Gull (Larus argentatus)

(Poor 1946) and Thayer´s Gull (Larus thayeri)
(Eckert 2002), anomalous individuals with one yellow iris and one brown iris have been described.
More interesting are cases where the eye color
difference is temporary. For example, the eye color of individual Black-bellied Glossy Starling
(Lamprotornis corruscus) changed from yellow to
red when handled (McCulloch 1963). The eye color of 5-6% of Red-billed Oxpeckers (Buphagus
erythrorhynchus) captured in South Africa also
changed during handling (Raijmakers & Ellmer
2009): the birds initially had red eyes and changed
one or both eyes to yellow or partially yellow. In
both cases, this phenomenon was explained by
stress and changes to the flow of blood to the iris.
No case of temporary heterochromia has so far
been reported in a Neotropical bird, and there is
no obvious explanation for this phenomenon. One
possibility is that, as in the aforementioned cases,
the temporary difference in eye coloration of the
Red-bellied Grackle female was related to changes
in blood flow to the iris as a result of handling. The
red iris in another icterid, the Bronzed Cowbird
(Molothrus aeneus), is caused by hemoglobin in
blood in large thin-walled venous sinuses overlaying abundant reflective pigment cells (Oliphant
1998). The iris loses its red color after death, as
does the outer margin of the iris of Red-bellied
Grackles. The yellow center of the Red-bellied
Grackle iris may also be vascularized, albeit to a
lesser extent, and sensitive to changes in blood
flow. Another possibility is that the pigment makeup of pigment cells in the aberrant eye differed

slightly from that in the normal eye or that blood
leaked in the anterior chamber of that eye (J. Hudon, pers. comm.). At present we are not able to
conclusively rule out any of these explanations.
In the Red-bellied Grackle, little information about
the variation in iris color with age has been published (Hilty & Brown 1986, Jaramillo & Burke
1999, Fraga 2011), although this is an important
feature to distinguish between age classes (Fig. 1).
The iris of juvenile birds changes color from dark
brown to gray and becomes bicolored pale yellow
within the first year. In adults, this feature does not
differ between sexes. This information can serve as
a basis for understanding the age-related variation
and the mechanisms involved in the iris coloration
in this species and other icterids.

Acknowledgments
Special thanks to J. A. Garizábal, P. A. Morales, G.
Valencia and L. V. Londoño who have contributed
in important ways as members of the Hypopyrrhus
pyrohypogaster breeding biology project. This
work was funded by our families and personal
funds. We thank Idea Wild, Optics for the Tropics
and G. Colorado for providing field equipment.
We also thank CORANTIOQUIA and the Communal Action Boards of Parque Ecológico y Recreativo Alto de San Miguel for allowing us to work in
the area. The Peregrine Fund Research Library assisted with bibliography. We specially thank Floyd
Hayes for his information and help locating references. J. Hudon, R. Fraga, D. Slager, M. McDermott and A. Craig made insightful suggestions that
improved the manuscript.