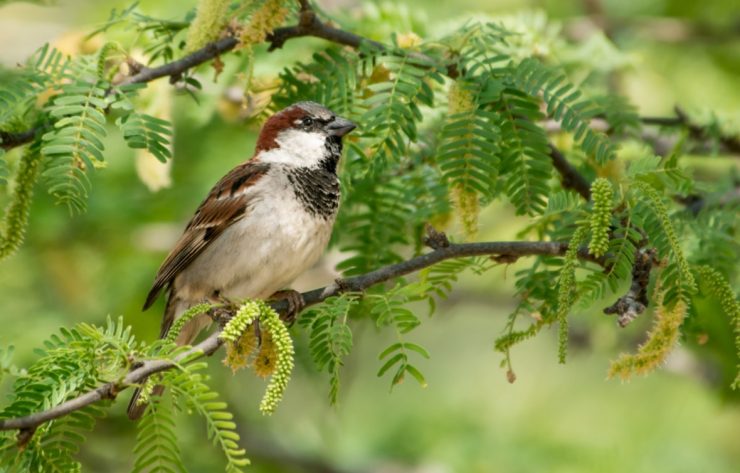 The House sparrow (Passer domesticus), is a species of passerine bird of the Passeridae family. It is adapted to the urban habitat to the point of being the most frequent and well-known bird in those areas, although in absolute terms the finch is more abundant. Live as a commensal of the human being. It is native to Eurasia and North Africa, but is currently distributed in urban areas in temperate zones of almost the entire world, as it has been introduced by humans in the rest of the continents, with the exception of Antarctica.

It can live thirteen years in captivity, although generally it does not reach seven years in freedom.

In India it is considered the state bird of Bihar and Delhi. In January 2016 it was chosen bird of the year by SEO / Birdlife to denounce the sharp decline in populations in recent years.

One hundred copies from England were released in Brooklyn, New York. This measure was followed in other cities in the United States, where it is known as the English sparrow.

The house sparrow weighs about 30 g and measures 14 to 16 cm in total length (the male is usually somewhat larger than the female). It is of robust conformation and has short legs. Its beak is thick, strong and conical, of a granivorous type.

Detail of a female.

The plumage of the male is gray on the undersides, somewhat darker on the cheeks and crown. It has a black spot that covers part of the chest and reaches, narrower, the throat to the jaw. After the autumn molt, the pale tips of the feathers partially hide the pectoral spot. During the winter these tips wear out, and in spring almost all males show them visibly in the shape of a bib. The rump, the crissum – the area surrounding the cloaca – and the tail are brown. The wings are chocolate-colored with a white wing band and some black feathers and of that same chocolate color are two curved bands that start, each one from above each eye to the neck. Between the beak and the eyes it has a black band reminiscent of a mask. In the courtship season, its beak turns black, and regains its brown color during the fall.

The female is almost uniform gray on her underparts and chest, with a brownish hue on the wings, crown, and tail, and a lighter superciliary band.

The legs are pink in both sexes.

The offspring known as gurriato, [4] is similar in its plumage to the female until the first molt, after which the males already appear with their characteristic colors, somewhat less intense the first year,

According to mitochondrial DNA studies, the house sparrow is the closest relative of the red sparrow (P. hispaniolensis).

It is native to Eurasia and North Africa, but is currently distributed in urban areas in temperate zones of almost the entire world, as it has been introduced by humans in the rest of the continents, with the exception of Antarctica.

The house sparrow is closely associated with human habitation and cultivation. It is not an obligate commensal of humans as some have suggested: birds of the migratory Central Asian subspecies usually breed away from humans in open country, and birds elsewhere are occasionally found away from humans. The only terrestrial habitats that the house sparrow does not inhabit are dense forest and tundra. Well adapted to living around humans, it frequently lives and even breeds indoors, especially in factories, warehouses, and zoos. It has been recorded breeding in an English coal mine 640 m (2,100 ft) below ground, and feeding on the Empire State Building’s observation deck at night. It reaches its greatest densities in urban centres, but its reproductive success is greater in suburbs, where insects are more abundant. On a larger scale, it is most abundant in wheat-growing areas such as the Midwestern United States.[

It tolerates a variety of climates, but prefers drier conditions, especially in moist tropical climates. It has several adaptations to dry areas, including a high salt tolerance and an ability to survive without water by ingesting berries. In most of eastern Asia, the house sparrow is entirely absent, replaced by the Eurasian tree sparrow. Where these two species overlap, the house sparrow is usually more common than the Eurasian tree sparrow, but one species may replace the other in a manner that ornithologist Maud Doria Haviland described as «random, or even capricious». In most of its range, the house sparrow is extremely common, despite some declines,[101] but in marginal habitats such as rainforest or mountain ranges, its distribution can be spotty.[

It is an smart, lively and curious bird. It is sedentary and gregarious. They are always found in inhabited places, such as streets, parks or gardens, as well as orchards and farms. It is very confident in the presence of humans and in large cities it can tolerate very close distances. In smaller towns he is more cautious. They feed on the ground, where they jump and jump with surprising speed. It is common to see them harass each other or other birds to snatch food. During the warm season the flocks are lax. Once the breeding is over, they gather in larger flocks, sometimes in the company of finches or starlings. At dusk they gather to sleep, usually in some tree or thick thicket, and make a lot of noise until each bird settles in its place.

House sparrow. Photo taken in a restaurant on the Rambla of Montevideo (Uruguay).

Its basic diet consists of seeds, both wild and cultivated, although due to its character as a commensal it takes advantage of the waste produced by humans, and in some areas it feeds almost exclusively on them. In rural areas it is customary to steal feed from farm animals, which is why it is not very appreciated. In the warm season it feeds on insects, mainly locusts and grasshoppers, in whose capture it is specialized, and it fattens its chickens almost exclusively with them.

Sparrows form monogamous pairs at each breeding season. The breeding season is long. The male chases the female, who responds with the typical chattering of anger and avoids the male; he progressively tolerates her presence until he allows her to fertilize her. They build the nests in spring, with dry leaves, feathers and scraps of paper. They nest in building crevices, under shingles, or in coniferous logs. They lay four to five eggs at each clutch. They can make up to four clutches, and these can happen at any time during the spring. Aggressively protect the areaaround the nest, both of other species and of individuals of the same species: males attack other males and females do the same with other females.

Both the male and the female are responsible for incubating the eggs once all have been deposited in the nest, taking turns every few minutes. At ten days the chicks hatch, and at fourteen days they are already fledged.

They can become very aggressive towards other species.

^ «Government of India webpage for National and State symbols». Archived from the original on November 12, 2013.

↑ Royal Spanish Academy and Association of Academies of the Spanish Language. «Gurriato».