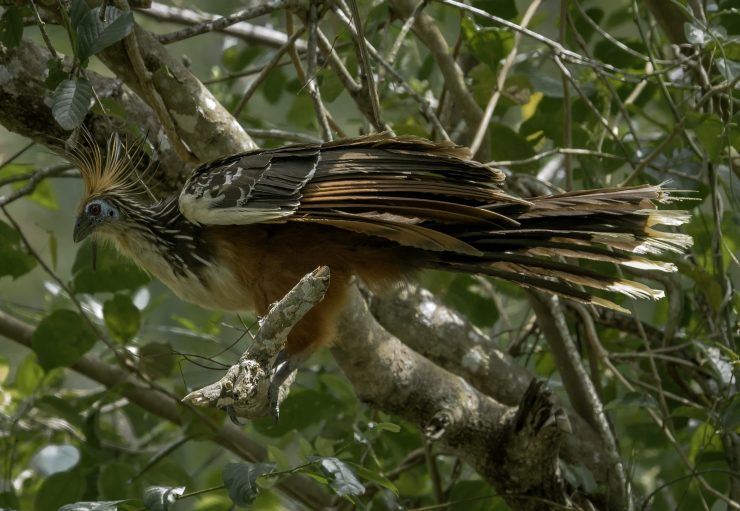 The Hoatzin also called Chenchena (in the Colombian Llanos), pava serere (in Bolivia), shansho (in Peru), guacharaca de agua (in Venezuela), or pava hedionda (in Colombia), it is a species of opistocomiform bird, the only representative of the genus Opisthocomus and of the family Opisthocomidae. No subspecies are known. The word Opisthocomus comes from the Greek opisthe, «behind» and komes, «hair» It is a peculiar tropical bird that inhabits the swampy areas that surround the Amazon and Orinoco rivers in South America.

There has been much debate about its relationship with other bird species. It has been given a family of its own, Opisthocomidae, and has previously been included within the order of Galliformes or Gruiformes, because of its resemblance to agami. Charles Sibley considered it more similar to cuckoos, which leads to more controversy because cuckoos have zigdactyl legs (two fingers forward and two backwards), while those of the hoacin are anisodáctila (three fingers forward and one finger towards behind). Cladistic analyzes suggest a relationship between the hoacin and the seriemas family (Cariamidae) and, more distant, with turacos (Musophagidae) and cuckoos.

It is the size of a pheasant, but it is much more slender, with a longer neck and tail and a small head. It has a limited flight capacity. Its approximate size is 60 cm. The face is naked, with a brilliant blue color and a red iris; the head is adorned with an erect, scruffy, fan-shaped crest. The color of the crest, the front of the neck and the chest is ante-cinnamon; the rest of the dorsal part is brown. The dorsal part of the body is almost all tan-olive tan. It has a somewhat long tail, which unfolds when flying, it is dark brown with wide suede-tan tips.

The Hoatzin eats the leaves and fruits of the plants that grow in the swamps in which it lives. One of the many peculiarities of this species is that it has a unique digestive system among birds. Hoatzins use bacterial fermentation in the front of the stomach to break down the plant material they consume, just as cows and other ruminants do. Because of this, this bird has a manure-like odor and is only hunted for food in times of dire need. This scent is thought to have helped it survive for millions of years and is considered by many to be a living fossil.

Hoatzin is a gregarious species and builds nests in small colonies, where it lays 2 to 3 eggs in a twig nest built in a tree that hangs above the water. The chick, which is fed with vegetable paste regurgitated by the parents, has another strange characteristic: two claws on each wing, which help it to grab onto the branches and climb them. This has inevitably led to its comparison with the fossil archeopteryx bird, with which it is not closely related.