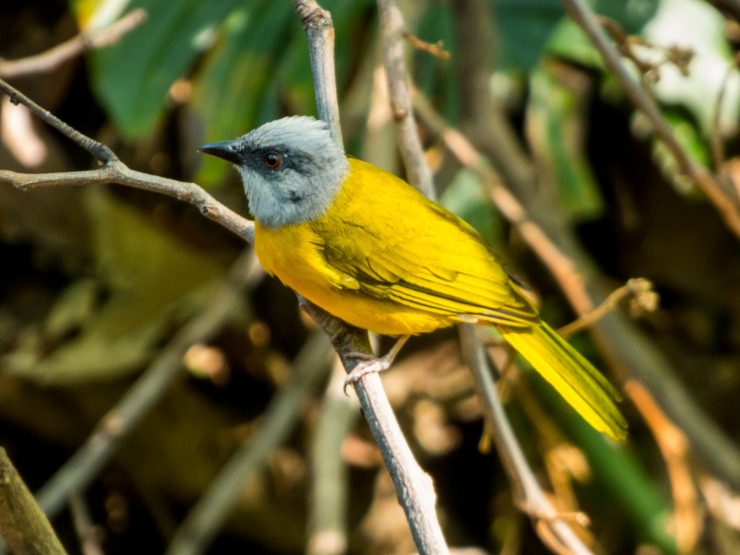 The Gray-headed Tanager (Eucometis penicillata) is a species of passerine bird in the Thraupidae family, the only one in the monotypic genus Eucometis. It is native to tropical America (Neotropics), widely distributed from southern Mexico to Paraguay.

The species E. penicillata was first described by the German naturalist Johann Baptist von Spix in 1825 under the scientific name Tanagra penicillata; no type locality was given, it is assumed: «Fonte Boa, Solimões river, Amazonas, Brazil» .6

The genus Eucometis was proposed by the British zoologist Philip Lutley Sclater in 1856.2

The feminine generic name «Eucometis» derives from the Greek «eukomēs»: with beautiful hair; and the name of the species «penicillata», comes from the modern Latin «penicillatus»: with brush, with bristles.9

Recent extensive phylogenetic studies by Burns et al. (2014) show that the present genus is twinned with Trichothraupis and the pair formed by both with the genus Loriotus, in a subfamily Tachyphoninae.10 Some authors in the past placed it in a genus Lanio.

According to the classifications of the International Ornithological Congress (IOC) 11 and Clements Checklist / eBird v.201912, seven subspecies are recognized, with their corresponding geographical distribution: 12

Eucometis penicillata penicillata (Spix, 1825) – from southeastern Colombia to the eastern Andes to the Guianas, eastern Peru and northern Brazil.

The various subspecies are distributed separately from the tropical southeast of Mexico, through Belize, Guatemala, Honduras, Nicaragua, Costa Rica, Panama, to the north and west of Colombia; in the Guiana shield, in Guyana, Suriname, French Guiana and the extreme north of Brazil; from the north of Venezuela, south through Colombia, Ecuador, Peru, in the Brazilian Amazon basin south of the Amazon River, Bolivia, south central Brazil and Paraguay.1

This species is considered uncommon in its natural habitat: the lower level of humid forests, forests and gallery forests, mainly below 600 m of altitude, but can reach up to 1200 m in the north of Venezuela.7

It is a medium bird, measuring between 17 and 18 cm in length. There is no very obvious sexual dimorphism. They are slightly crested birds, with white-based crest feathers. The entire head and neck are gray. The back, wings and tail are olive green. The chest, the belly and the lower covering feathers of the tail are bright yellow. The eyes are dark brown, the bill is black and the legs are yellow. Southern birds are paler, with a pinkish bill, a longer crest, and a more beige throat.7

It is an active and restless bird, it raises its crest when it is nervous or agitated. Forages in pairs, sometimes accompanying mixed flocks from the understory; populations west of the Andes follow swarms of legionary ants to capture the prey they scare away.7

Often makes abrupt, rattling calls. The song, little heard, is a hurried and varied sequence of abrupt and sharp notes.