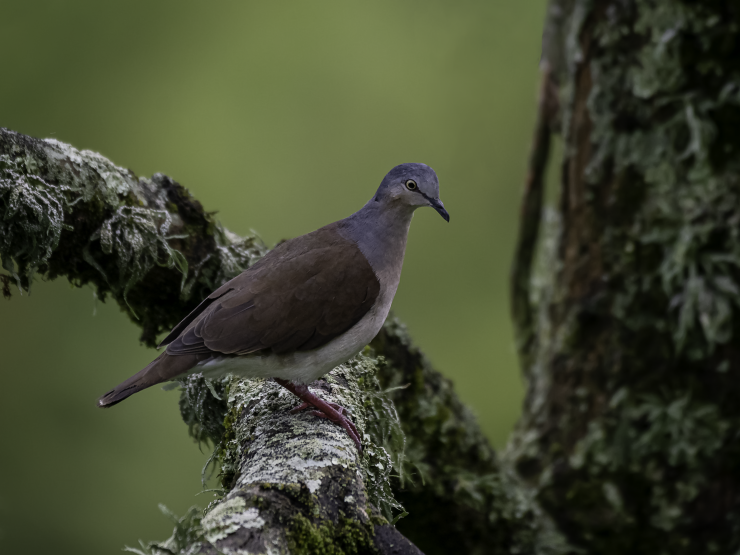 It is 23.5 to 26 cm long and weighs 139 to 205 g. It has a black bill, pink legs, yellowish-white eyes, and red orbital skin. It has a pale bluish-gray forehead, which becomes a little darker on the crown, nape, upper mantle and sides of the neck. He has a black loreal line, face and ear coverts pinkish buff, turning pale pink on the chest. It has rufous washed olive brown upperparts with dark olive brown central rectrices and the outermost three black with white tips. Its underparts are white with a pink wine tinge, chest and inner wing coverts cinnamon. The female has a grayish fawn washed breast. The young individual is more olive above with dark subterminal bars and chest with a barred appearance.

It is found from eastern Mexico and eastern Central America to western Costa Rica, the Caribbean Coast of Panama, and western Colombia. In Colombia it is distributed mainly from 1600 to 1800 m above sea level on the Pacific slope in the upper basin of the Dagua River and in the middle and upper valley of the Cauca River from southwest of Caldas south to Popayán and Munchique . It has also been recorded at an altitude of 2,600 m in the Puracé National Natural Park.

In Colombia, individuals in reproductive condition have been registered in the month of January in the Puracé region. Other aspects of their reproductive biology are unknown.

Stays alone or in pairs, sometimes in small loose groups. Terrestrial and surly, it walks on the ground where it nods a lot when it pecks. When disturbed, it silently drifts away or flies to a nearby perch.

Sometimes considered conspecific with L. rufaxilla. Some authors consider that it forms a superspecies together with L. pallida, L. rufaxilla, L. jamaicensis and L. wellsi.