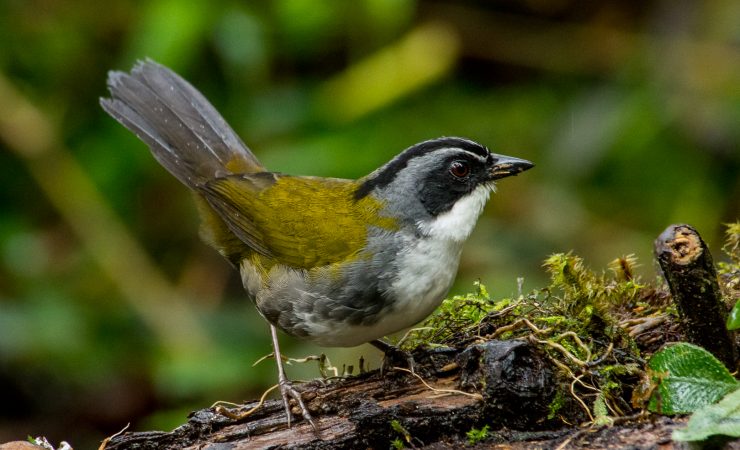 It is a bird which belongs to the family of Passerellidae and the order of Passeriformes, it is measures around 18 centimeters.

Both sexes are similar. It is a robust bird, with a bill and a large head. He’s got the hood and the black face, stretching to the cheeks and headphones. It also has a median line on the crown and a supercilium gray color that extends almost to the base of the beak, near which they become whiter. These superciliums also extend behind the eye and join the gray neck, which extends downwards to the sides of the neck. Its upper parts are olive-green and its lower parts are white with the sides of the chest and the flanks of gray color, which turns olive gray in the cloacal area. The iris of his eyes is brown, the bill black and the legs grey with shades pink. The juvenile ones have the bill yellowish.

This species is found in western Venezuela and across the Andes to southern Peru. In Colombia it is between 1500 and 3600 m high above sea level in the three lowest mountain ranges on the western slope of the Western mountain range.

It is found in the undergrowth of humid forest, especially near the edges.

Stays alone or in pairs. Forages on the ground where he digs leaf litter with his bill in search of prey.