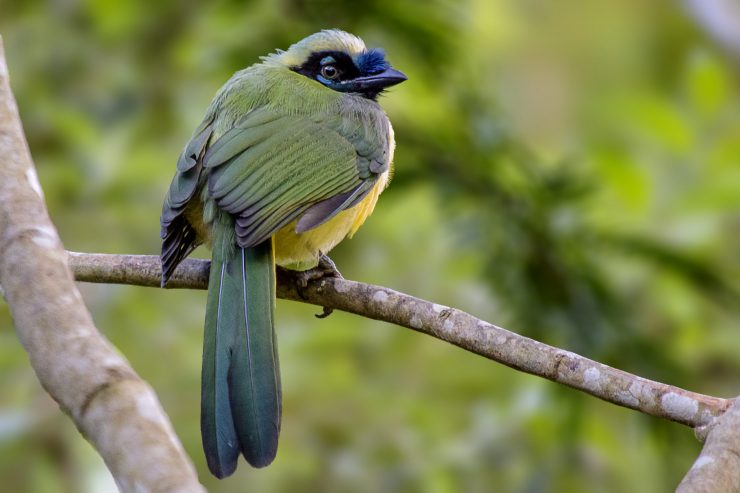 The green jay is a bird species of the New World jays, and is found in both North and South America. Adults are about 27 cm (11 in) long and variable in colour across their range; they usually have blue and black heads, green wings and mantle, bluish-green tails, black bills, yellow or brown eye rings, and dark legs. The basic diet consists of arthropods, vertebrates, seeds, and fruit. The nest is usually built in a thorny bush; the female incubates the clutch of three to five eggs. This is a common species of jay with a wide range and the International Union for Conservation of Nature has rated its conservation status as being of «least concern».

Green jays are 25–29 cm (9.8–11.4 in) in length. Weight ranges from 66 to 110 grams (2.3 to 3.9 oz). They have feathers of yellowish-white with blue tips on the top of the head, cheeks and nape, though some taxa have more blue than others. The breast and underparts range from bright yellow in the south to pale green in the north (e.g., Texas). The upper parts are rich green. It has large nasal bristles that form a distinct tuft in some subspecies, but are less developed in others. The color of the iris ranges from dark brownish to bright yellow depending on the subspecies.

Usually lumped with Inca jay (C. yncas yncas) of South America. Somewhat confusing in classification, the green jay is then used as the species name, even though the inca jay is the nominate subspecies. [3][4] Some authorities split the two species with the Inca jay retaining the binomial C. yncas and the green jay adopting C. luxuosus.

The green jay group occurs from southern Texas to Honduras, also in Colombia to the North of Bolivia. The Inca jay subspecies then have a disjunct home range in the northern Andes in South America.

Green jays feed on a wide range of insects and other invertebrates and various cereal grains. They take ebony (Ebenopsis spp.) seeds where these occur, and also any oak species acorns, which they will cache. Meat and human scraps add to the diet when opportunity arises. Green jays have been observed using sticks as tools to extract insects  from tree bark.

Green jays usually build a nest in a tree or in a thorny bush or thicket, and the female lays three to five eggs. Only the female incubates, but both parents take care of the young.

The Green Jay practices monogamy, and pairs may form at any time during the year through the replacentment of an absent breeder. During the breeding season, a breeding pair rarely parts. Nests are usually in dense thickets, and trees and bushy shrubs are common nesting sites. Both the male and the female participate equally in choosing the nest site and building the nest. In Colombia, other members of a flock have occassionally been seen to participate in constructing the nest. The nest is cupped and its thin walls enable the eggs inside to be seen from below. Green Jay nests are constructed of thorny twigs and sticks and lined with roots, stems, moss, or dry leaves. Average clutch size is four grayish-white oval eggs. Incubation is performed only by the female and lasts 17 days. In Texas populations, the female is fed by the male at least six times a day. In South American populations, the female is fed by her mate; however, during the last three days of incubation she is fed by other flock members. After the chicks have hatched, the male continues to bring food to the nest for five days, then both parents share equally in bringing food to the chicks. Once the chicksd leave the nest, the female continues to feed them for three weeks. In Columbian flocks, all members cooperate in bringing food to the young and continue feeding the chicks for at least 20 days after they leave the nest.

Texas populations are nonmigratory; however, there is a possibility of local migration in the Honduras population. The southern Texas population of Green Jay displays unusual behavior as it retains related nonbreeders in family flocks without cooperative breeding (helpers at the nest). These Texas flocks contain a breeding pair, the currrent year’s nestlings, and the one year old non-breeding jays from the previous breeding season. The one year old nestlings provide territorial defense, but are ejected from flock when the current season’s chicks have fledged. Colombian flocks have fixed year-round members that include helpers at the nest. Helpers at the nest may be needed in Colombia because food is less abundant due to habitat saturation. Usually, the more helpers a flock has, the higher the surviorship of its fledglings.

The green jay is a common species throughout most of its wide range. It is an adaptable species and the population is thought to be increasing as clearing of forests is creating new areas of suitable habitat. No particular threats have been identified, and the International Union for Conservation of Nature has rated its conservation status as being of «least concern».

As with most of the typical jays, this species has a very extensive voice repertoire. The bird’s most common call makes a rassh-rassh-rassh sound, but many other unusual notes also occur. One of the most distinctive calls sounds like an alarm bell.