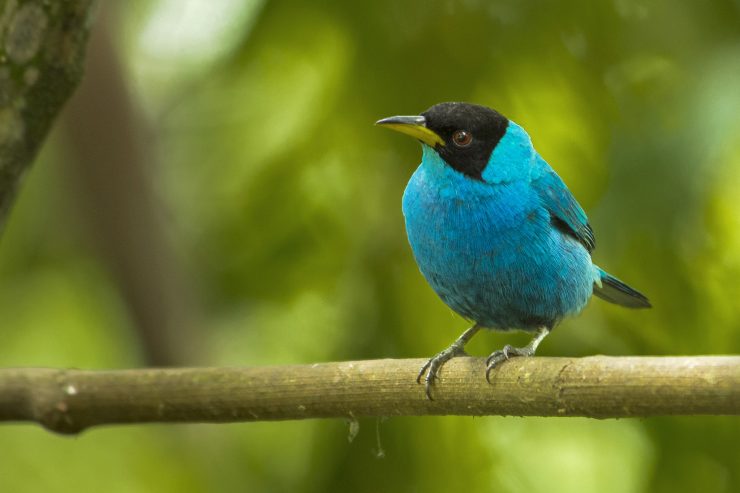 The size of the bird is 13 cm and weighs between 14 and 23 g. It is a bird with a long, sharp beak and slightly curved at the tip, bright yellow with a black culm (1). The male has a bluish-green to intense turquoise plumage, with the crown (2) and the sides of the head in the shape of a black «hood»; it has red eyes and grayish legs.

The immature (3) is similar to the female, with dull green plumage with paler underparts, but darker in color, the belly is grayish in color and the eyes are reddish.

It is found from the South East of Mexico to Ecuador, Bolivia and Brazil; in Colombia it is on the Pacific coast through the Andes to the Eastern Cordillera, in the Serranía de Perijá, and from Norte de Santander to the eastern plains. It is up to 2,300 m high.

Present in humid and very humid forests, vegetation with secondary growth in lowlands and edges, foothills and gardens with scattered trees.

Their reproductive seasons have been reported to be between April and July, and occasionally until September in Costa Rica, between May and July in Trinidad; in Panama a female was observed transporting material to build nests in July and with chicks between June and July.

It has parental care and the chicks remain in the nest for approximately 12 days and are fed by both parents, although the female makes almost three times as many visits as the male.

Based on an Amazonian deforestation model (Soares-Filho et al. 2006, Bird et al. 2011), it is thought that the population over three generations (approximately 11 years) loses between 14.9 and 16.4 % of suitable habitat within its range; the population is then expected to decrease by 25% over this period of time.