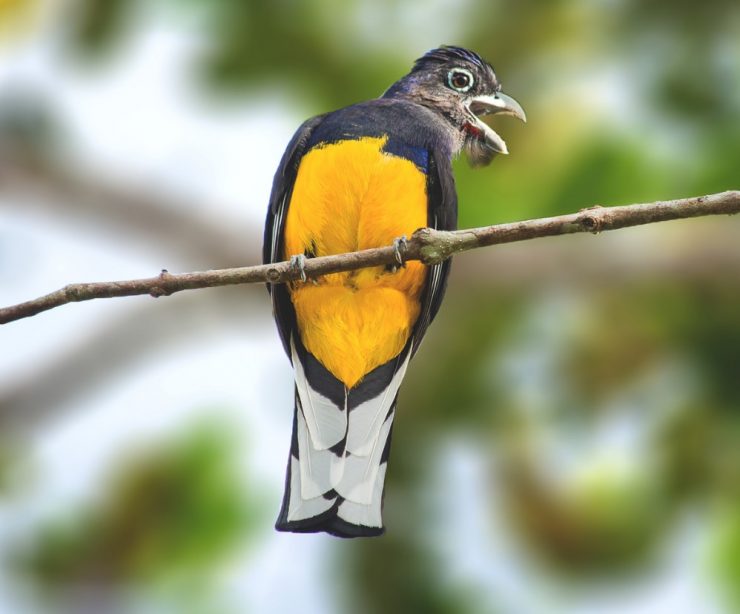 The green-backed trogon (Trogon viridis), also known as the Amazonian white-tailed trogon, is a near passerine bird in the trogon family. It is found in tropical humid forests in South America, where its range includes the Amazon, the Guiana Shield, Trinidad, and the Atlantic Forest in eastern Brazil. It formerly included T. chionurusof the Chocó region as a subspecies, but under the common name white-tailed trogon (a name now reserved for T. chionurus).

This relatively large trogon is 28 to 30 centimetres (11 to 12 in) long. As most trogons, it is strongly sexually dimorphic. In the male the head and upper breast are dark blue (appears blackish in poor light), and the back is green. The lower underparts are orange yellow. The wings are black, vermiculated with white. The undertail is black and white: Each feather has a broad black base and a broad white tip and outer edge. The complete eye-ring is pale bluish. The female green-backed trogon resembles the male, but has a grey back, head and breast, and distinct black-and-white barring mainly to the outer webs of each tail feather.

For comparison, the similar but smaller violaceous trogon has a yellow (male) or incomplete white eye-ring (female), and the male also has barring to the undertail.

It is found in tropical humid forests in South America, where its range includes the Amazon, the Guiana Shield, Trinidad and Tobago, and the Atlantic forest in eastern Brazil.

It is a resident of humid tropical forests, and it typically is the commonest trogon in its range. It nests in a termitenest or a hole in a rotten tree. The nest is usually if not always built by the female which excavates an upward-sloping tunnel ending in a breeding chamber. The nesting season is apparently mainly during the summer months (June–August). The clutch is typically two or three white eggs. These are incubated for 16–17 days, with a further two weeks to fledging.

It nests in cavities, often excavated in arboreal termite nests at a height between 1 and 13 m above the ground. During mating, the male feeds the female.

Their broad bills and weak legs reflect their diet and arboreal habits. Green-backed trogons feed mainly on small fruit, supplemented by arthropods – slightly more so in the dry season when fruit are scarce, but even then they seems to be among the most frugivorous trogons in their range.

They are consequently more rarely seen to attend mixed-species feeding flocks than other trogons.

They typically perch upright and motionless. Although their flight is fast, they are reluctant to fly any distance.

The species T. viridis was first described by the Swedish naturalist Carolus Linnaeus in 1766 under the same scientific name; ‘Cayenne’ type locality.

Forms a superspecies with Trogon bairdii, Trogon citreolus, and Trogon melanocephalus; sometimes considered conspecific with T. bairdii. DNA studies suggest that the present species may be closer to Trogon violaceus and Trogon curucui. Birds from southeastern Brazil are described as the melanopterus subspecies, but individual variations, as well as the overlap in biometrics with populations at various locations in the distribution, create doubts as to their separation.

The Trogon chionurus species was separated from the present one according to Proposal No. 379 to the South American Classification Committee (SACC) based on the molecular phylogeny studies of DaCosta & Klicka (2008), which showed 99% probability by method “Bookstrap” and 100% by “bayesian” method the sister relationship between chionurus and bairdii, as well as strong support for the Amazonian subspecies T. viridis viridis being their sister.

According to the classification of the International Ornithological Congress (IOC – Version 4.3, 2014) and Clements Checlist 6.9, 2 subspecies are recognized, with their corresponding geographical distribution:

The song of the green-backed trogon consists of about 20 cow notes that start slow, but accelerate towards the end. The song is slower than the white-tailed trogon, and higher pitched than the black-tailed trogon.