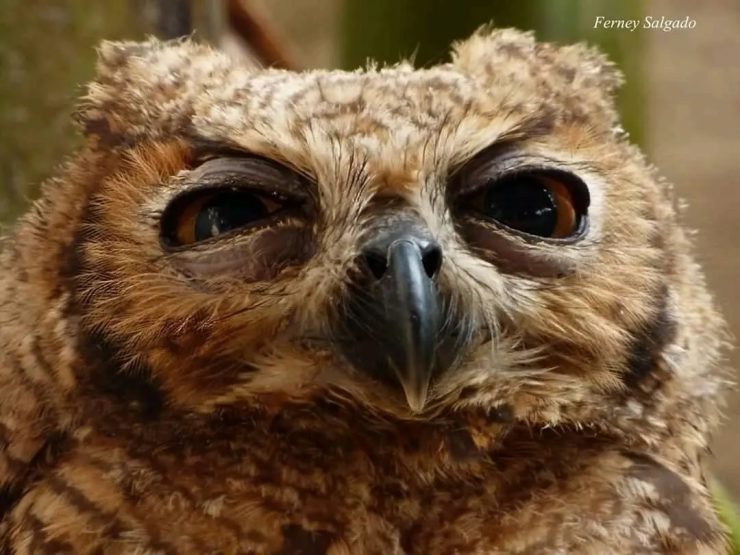 Males are around 51 cm tall and weigh 680 to 1450 g. Females are about 60 cm tall and weigh 1000 to 2500 g. It features a white facial disc edged with black with a pair of long, erect ear tufts. Above it is dark brown with mottled and vermiculated buff and gray. It has a white throat, a chest with a few black streaks and the rest of the underparts barred with dark brown and whitish. Juveniles are reddish-orange in color with a more reduced and opaque white throat patch and shorter ear tufts.

It could be confused with the Crested Owl (Lophostrix cristata) but the latter has longer, white ear plumes and lacks prominent baring on the undersides.

Twelve subspecies are recognized, of which only two are found in Colombia, B. v. nigrescens and B. v. nacurutu. The subspecies nigrescens is much darker and heavily spotted, while the nacurutu is more brown and has a longer tail.

It is found in Alaska, Canada, the United States, Mexico, Central America and in South America in Colombia, Venezuela, Guyana, Bolivia, northeastern Brazil and central-eastern Argentina. In Colombia it is found up to 4,000 m above sea level in the Caribbean region from Bajo Sinú and Bajo Cauca eastward to Guajira and south through the three inter-Andean mountain ranges and valleys to the knot of pastures. East of the Andes from north of Arauca and east of Vichada to Meta.

It is found in wooded areas, on moors, mangroves, and in open areas with scattered trees. It can be found on farmland with surrounding forest patches and in parks within cities.

It feeds on small mammals (coatis, rabbits), birds, amphibians, reptiles, fish, and invertebrates (beetles and scorpions). In some places, mammals can make up 90% of their diet. Among the birds on which it feeds have been recorded from small passerines to large herons (Ardea herodias).

In Colombia, individuals in reproductive condition have been registered in January. It can nest in old nests of other large birds (ichteridae and raptors) which are usually tree cavities. It also nests in tall palms, on the main branch of a tree, on ledges, and sometimes on the ground. It lays 1 to 6 eggs (usually 2) which are incubated for 28 to 37 days by the female, who is fed by the male during the night. The young fly at about 10 weeks after hatching and remain in the care of their parents for up to five more months.

It is a nocturnal, solitary and highly territorial bird. It rarely forages during the day and when it captures its prey it does so on the ground, making steep falls from a chest. It has on occasion been observed foraging while walking on the ground and wading in the water. Small prey swallows them whole while large prey dismembers them. It has a strong and powerful flight with short flapping periods which alternates with gliding.

The subspecies Magellanicus is considered by some authors as a distinct species based on differences in voice, morphology, and DNA. However, there are intermediate populations that have not yet been sampled, which is why a more detailed study is necessary to clarify the status of this breed. For eastern Colombia, the elutus race has been proposed and for the center of the country the Colombianus subspecies, but these have been considered invalid due to the fact that the limits are not clear and the existence of individuals of intermediate appearances.

In the international arena, it is considered a kind of minor concern. However, it is included in Appendix II of the Convention on International Trade in Endangered Species of Wild Fauna and Flora (CITES).