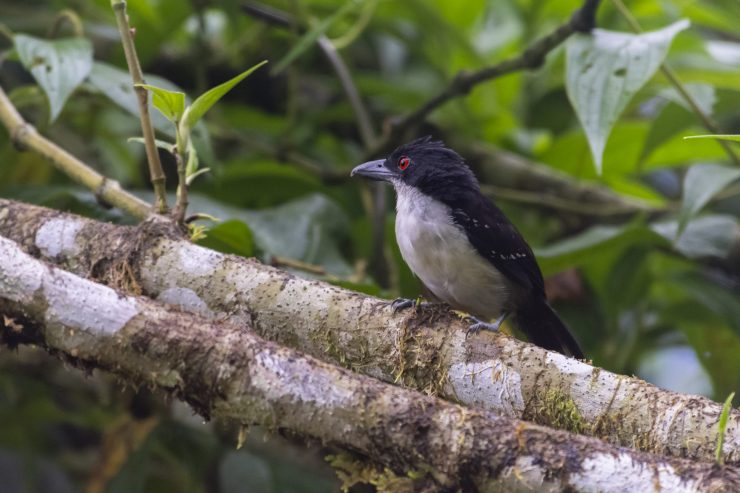 The great antshrike (Taraba major) is a passerine bird in the antbird family, Thamnophilidae. It is the only member of the genus Taraba. It is a resident breeder in the tropical New World in southern Mexico, Central America, Trinidad and South America down to northern Argentina and southeastern Brazil.

The generic name «Taraba» is an anagram of the genus name Batara, Lesson, 1830; and the name «major» comes from the Latin «maior, maioris»; bigger, bigger.

The great antshrike was described by the French ornithologist Louis Vieillot in 1816 and given the binomial name Thamnphilus major. The current genus Taraba was introduced by the French naturalist René Lessonin 1831. There are ten recognised subspecies.

The great antshrike is a large and distinctive antbird, typically 20.3 cm long, and weighs 56 g. It has a crest, heavy hooked bill, and brilliant red eyes. The adult male has black upperparts, with two white wingbars and white underparts. There is a white dorsal patch normally concealed except in threat display; young males are similar to the adult, but have rufous wing coverts. The female has rich rufous upperparts and white underparts.

This is a bird of thickets, cocoa and citrus plantations and sometimes gardens, with a preference for dense undergrowth. It is usually found as territorial pairs.

The great antshrike feeds on insects and other arthropods gleaned from foliage. It will also take small lizards and mammals.

It generally lives in territorial pairs, which reproduce between April and June (in Central America), between September and February in southern South America. Build the nest in bushes, vines or in bushes, tall grasses. Low altitude (0.80 m, lowest) and medium height (3.5 m, highest). Hidden or semi-exposed. It is elaborate, has the shape of a bowl or hemisphere, pendant, tied at its upper edge to forks or twigs. It uses vegetable fibers and herb stems in the construction. It can occupy the same nest more than once. The female lays 2 or 3 eggs, ovoid or elliptical, measuring 28 x 21 mm on average. They have a white or whitish base with light gray, dark and brown spots and stripes, distributed over the entire surface but more concentrated in the greater pole. The couple build, incubate and raise the chicks. The incubation period is 11-12 days. Delay in nest construction of 8 to 10 days. The incubation period is 16-17 days. The eggs are laid on alternate days. Chicks hatch in 24 hours and remain in nest for 16-17 days. Both sexes incubate and raise young. It suffers from laying parasitism by Molothrus bonariensis.

The female lays two, sometimes three, grey-marked white eggs in a deep cup nest in a shrub, which are incubated by both sexes for 14 days to hatching. The chicks fledge in another 12 days.

The vocalizations are very varied. It can be easily located by its song, a «puk-puk-puk» … composed of 30-40 notes. It also emits a dry «churrrr» snore. The song is a long series of nasal «caan» notes, progressively faster, which may end in one or two harsh «craaan» notes. It also gives various rattling, harsh calls and «fall» notes.