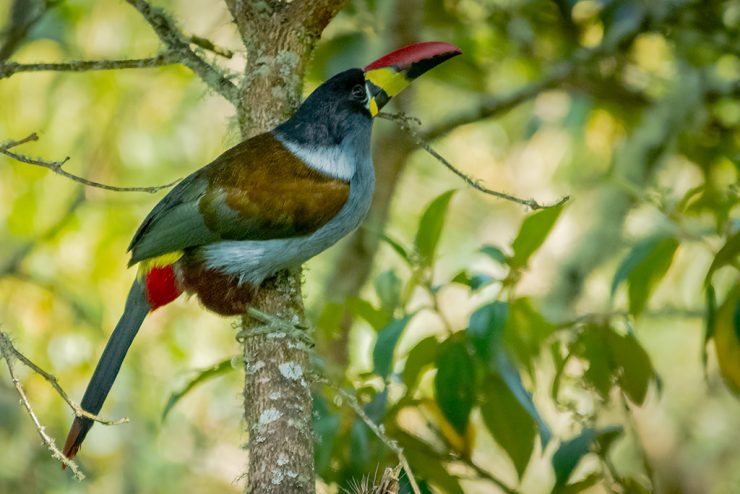 Grey-breasted Mountain Toucans are usually 46 to 48 centimeters in length, moderately large for toucans. They have a black cap, nape, and face, green-tinged brown back, dark greener wings, and dark grey-blue underparts. In addition, the hindcollar is pale blue, the rump is bright yellow, the tail blackish to brown, with chestnut tips to the 2-3 central pairs of rectrices, the thighs are chestnut, and the undertail coverts red. The bare circumorbital skin is dark blue, paler blue at the base of the bill, the eyes pale yellow to brown, depending on subspecies (see below). Their large bills are mainly yellow to greenish-yellow, with the culmen and tip of the upper mandible broadly red, bordered proximally by a black triangle, and with a broad black vertical strap near the bill base; the sides have serrations (“teeth”). The sexes are monomorphic, although females have a shorter bill. Young of this species are duller, with muted colors. They have no marks at the base of their bills and they lack «teeth”. Only a few physical traits differentiate the two subspecies. A. h. lateralis has a paler yellow rump, a pale yellow flank patch, and eyes that are yellow to green with a blue outer ring. The flat wing range of males is 170 to 178 mm, the tails are 156.5 to 175 mm, and the bill length ranges from 85.5 to 102 mm. A. h. hypoglauca have a dark brown iris and are generally a few millimeters larger than A. h. lateralis. The typical adult male wing measurements range from 176 to 183 mm. Their tails range from 162 to 172 mm and their bills range from 88 to 100 mm in length.

Grey-breasted mountain toucans are found in the northern and central Andes Mountains of South America, from central Columbia to southeastern Peru. They are an eastern-slope species and therefore are found mostly on the eastern side of the Andes Mountains, but in Columbia they also occur on the western slope of the Central Andes. The subspecies Andigena hypoglauca hypoglauca is found in the mountains from central Colombia to eastern Ecuador. The other subspecies, Andigena hypoglauca lateralis, is found in the Andes from eastern Ecuador to Peru. (del Hoyo, et al., 2002; Paulsen and Krabbe, 1998)

Grey-breasted mountain toucans are thought to breed from December to February in Colombia and from June to November in Ecuador and Peru. It is suspected that at these times in each region the number of plants that bear fruit is very high. There are no specific records of grey-breasted mountain toucan breeding behavior, nests or eggs. However, many generalizations have been made about other, similar toucans. Generally, mountain toucans breed in pairs, not groups. When mating they are not known to do anything elaborate. In some cases copulation occurs without a mating ritual. Their colors and markings do not change seasonally but are thought to be important in courtship. The most common mating ritual is courtship feeding, which is performed by all species of toucans. In captivity large toucans will kill other toucans of the same species if they are in the same cage once breeding has begun.

None of this information is known. Other species of toucans lay between one and five eggs daily. Copulation still occurs during the laying cycle. In many cases the female will incubate the eggs more than the male. Data for incubation periods are only available for eleven species of toucans. The nestling period for all toucans seems to range between 40 and 60 days. It is rare for young under the age of one year to breed. In some cases, young are forced out of their family group

Breeding occurs from December to February in Columbia and June to November in Peru and Ecuador.

Both parents care for the young. When the eggs hatch the young are naked and blind. Typically piciforms have short incubation periods but a long nestling period during which the parents brood and feed their young. Generally, adult toucans bring food to the nest either in their throat, stomach, or more often their bill. The parents use their bills as well to remove waste from the nest. No specific information is known about parental investment of grey-breasted mountain toucans. If breeding occurs in pairs, then presumably both parents contribute to the care and protection of their offspring. (del Hoyo, et al., 2002)

Toucans are social birds, usually being found in pairs or small groups. Unlike parrots, they don’t fly in compact bands. When toucans fly from one area to another, first one individual will fly and the others will follow one by one, with some straggling behind. However, they do all eventually make it to the same destination. Larger species of toucans have a flapping and gliding flight. Grey-breasted mountain toucans are arboreal, spending most time in tree canopies.

Little is known about specific ecosystem roles of grey-breasted mountain toucans. However, toucans as a group suffer from predation during their breeding times. Snakes take eggs from the nests of toucans, decreasing reproductive success. Flightless or poorly flighted young are also more susceptible to predation than adults. Grey-breasted mountain toucans eat mostly seeds and berries. When they carry these foods in their bills some drop to the ground and become dispersed. This helps to spread plant growth in their ecosystem. Grey-breasted mountain toucans are evidently the sole known hosts for the parasitic chewing louse Austrophilopterus andigenae (Phthiraptera: Philopteridae), which feeds on feathers of the head and neck. (del Hoyo, et al., 2002; Weckstein, 2004)

Grey-breasted mountain toucans are very aesthetically pleasing to the human eye, with their very brightly colored, attractive plumage. The fact that many bird-watchers travel to the Andes to see these beautiful birds, among many others, can provide economic benefits to some local economies.

According to the IUCN Red List, in 1988 grey-breasted mountain toucans were considered threatened. However, in 1994 their status was lowered to near threatened/lower risk. Reasons that this species belongs on the nearly threatened list include: habitat loss and degradation due to agriculture, livestock, mining, and small scale subsistence farming. The majority of degradation is occurring at lower altitudes; which mountain toucans do not occupy. However, some of the higher zones that include their elevational range are being cleared as well. Problems appear to be most severe in Colombia and least severe in southeastern Peru. Several protected areas have been named that should safeguard habitat of this species, for instance Las Cajas National Recreation Area and Podocarpus National Park in Ecuador.

The song of grey-breasted mountain toucans is a loud, low, slowly rising, rather cat-like «gweeeeeeeeeat» lasting from 1.75 to over 2 seconds. This is the longest known piciform note. They will repeat this song slowly at 24 to 36 per minute. They also occasionally make variable bill rattling sounds. In alarm or aggression, grey-breasted mountain toucans give a single or irregularly repeated sharp «wek» note, and in alarm they sometimes add bill-snapping. (del Hoyo, et al., 2002; Paulsen and Krabbe, 1998).https://www.xeno-canto.org/253080