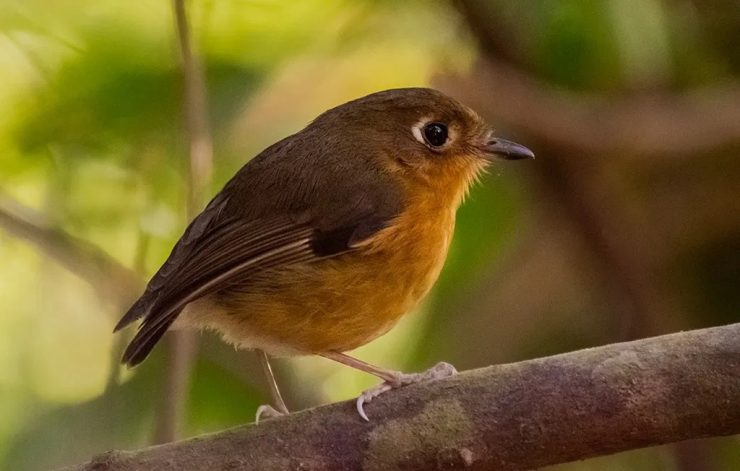 It is found in the Andes from Venezuela to Bolivia with a rather discontinuous distribution. Its name Grallaricula is the diminutive form of Grallaria, grallarius = stilt man. The epithet ferrugineipectus derives from the Latin roots ferrugineus = rusty and pectus = chest.

It is 9.7 to 12.1cm lenght and weighs 15 to 21 g for the male and 13 to 18 g for the female. Both sexes similar. It has brown irises, gray to pinkish-gray legs, and black bill with a white or white-pink lower jaw base. It has dark brown sides of the head and upper parts with a slight olive wash, a whitish spot in the loreal region, a buff eye ring and a white arch behind the eyes. Its underparts are bright ocher in color with a white crescent on the lower part of the throat and a white center of the belly.

It resembles the Slaty-crowned AntpittaGrallaricula nana) which has darker upperparts and a slate gray crown, not brown. The Ochre-breasted Antpitta (Grallaricula flavirostris) is generally found lower elevations and has black streaking on its chest.

Three subspecies are recognized: G. f. ferrugineipectus, G. f. rare and G. f. leymebambae, the first two in Colombia. The nominal race is found in the north of the country and the rare subspecies is found in the Serranía del Perijá, in the Eastern Cordillera, and is distinguished by a slightly darker back, brighter lower parts and a white crescent on the chest that is almost absent.

It is found in the north and west of Venezuela, north and central Colombia, northwestern Peru, and northwestern Bolivia. In Colombia it is found from 600 to 2,200 m above sea level in the Sierra Nevada de Santa Marta, Serranía de Perijá, on the eastern slope of the Eastern Cordillera in the department of Norte de Santander and on the western slope of the Eastern mountain range in Cundinamarca, Boyacá and Santander.

It inhabits the understory of humid montane forests, less frequently found on forest edges and in some areas in dense bamboo growths. Forages up to 2 or 3 m high and rarely on the ground.

It feeds on a wide variety of arthropods, among which have been recorded: beetles, crickets, cockroaches, moths, spiders, hymenopterans and hemiptera.

In the northern part of its range, its reproductive period covers the first half of the rainy season. In Colombia a nest was reported in October in the Sierra Nevada de Santa Marta. Its nest is a slightly concave platform, built with twigs, petioles, roots and mycelia, at heights ranging between 0.5 and 2 m on small shrubs, palms or lianas. The size of its position is two greenish-white eggs with markings on the larger end, which are incubated by both parents for 16 to 17 days. The chicks are also fed by both parents and acquire all the plumage necessary to fly from day 14 to 16 after hatching.

Stay alone or in pairs. It searches for prey in moss covered branches, leaves, bark, litter and occasionally flies to catch prey in vegetation. It moves mainly by horizontal branches and frequently pauses for long periods of time while moving the rump spasmodically, albeit rhythmically.

The rare race was previously considered a distinct species and some authors suspect that the present species could constitute more than one taxon. It has been suggested that according to vocal differences the leymebambae race deserves recognition as a distinct species.

At the national and international level, it is considered a species of least concern.

Fierro-Calderón, K., F.A. Estela, and P. Chacón-Ulloa. 2006. Observations on the diets of some birds of the Eastern Cordillera of Colombia from the analysis of stomach contents. Ornithology ColoMbiana 4: 6-15.