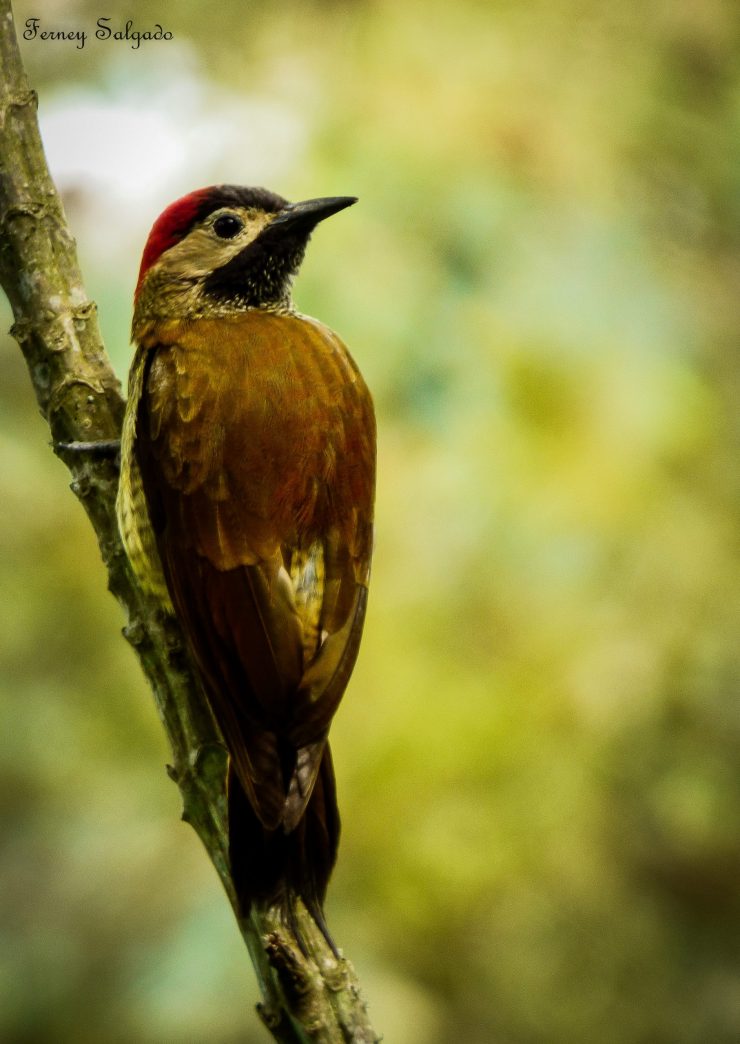 Previously classified in the genus Piculus, this species is quite polytypic and in Colombia there are at least 4 races. Its name Colaptes derives from the Greek kolaptes = pecker, chiseller. The epithet rubiginosus derives from Latin and means reddish.

Previously classified in the genus Piculus, this species is quite polytypic and in Colombia there are at least 4 races. Its name Colaptes derives from the Greek kolaptes = pecker, chiseller. The epithet rubiginosus derives from Latin and means reddish.

It measures 18 to 23 cm and weighs 74 to 88 g. It has a medium-sized black bill with a curved culm, red irises and olive-gray legs. Male has red crown and occiput, loreal area, ear coverts and area around the eye pale buff. It also features a red malar streak that extends to the back and sides of the neck barred in yellow and olive suede. Its upper parts are green with brownish-olive flight feathers with green edges and tertiary with bronze tint. It has brown tail, rump and green uppers with dark olive bars. Their chin and high throat are buffy white with black striations and their underparts yellow to completely barred blackish olive. The female differs because it lacks red in the malar region and has red only in the occiput. The young are very similar to the adults but more opaque and with the less marked color pattern.

19 subspecies are recognized, of which only four are found in Colombia C. r. alleni, C. r. gularis, C. r. rubripileus and C. r. good view. The alleni breed is found in the Santa Marta area, it is larger, golden-bronze in color with some red tinge above, more or less barred on the rump, with white spots on the throat and narrow black bars on the chest. The gularis subspecies is found in the western and central Andes, is more or less large with very fine pale spots on the throat and is paler below. Rubripileus is found in the southwest of the country, it is smaller with blacker bars on the chest. The Buenavistae breed is found east of the Andes, has a bronze back with a red tint, a well barred rump and the underparts with olive green baring.

It is found from eastern Mexico and through Central America, Colombia, Venezuela, Trinidad and Tobago, Suriname, Guyana, Ecuador, Peru, Bolivia and northwestern Argentina. In Colombia it is distributed from 900 to 3100 m above sea level in the Sierra Nevada de Santa Marta, the Serranía de Perijá, the Western and Central mountain ranges and in the Eastern mountain range on its western slope from the south to the southeast of the Santander department and on the eastern slope from the south to the Serranía de la Macarena.

It feeds mainly on ants, termites, larvae and adults of beetles and occasionally on fruits.

In Colombia, individuals in reproductive condition have been registered from January to June. It nests in holes dug in the trunks of dead trees, live trees, or palms. The size of their position is 2 to 4 eggs, which both sexes hatch. The young remain in the nest for about 24 days.

It remains alone, in loose pairs and is associated with mixed flocks. Forages inside forests in the canopy and sub-canopy but is more frequently seen in more open areas, generally in fairly tall trees. Searches for prey in the bark of trunks and branches by drilling, cavity probing, hammering, and pecking in dense foliage, lianas, clumps of epiphytes, and moss-covered branches.

It forms a superspecies with P. auricularis with which it has come to be considered conspecific. The races aerugonosus and yucatanensis probably constitute different species. The classification of the races of this species has been established based on differences in the color pattern of the plumage, for which the delimitation in many cases has been difficult. The pacificus subspecies proposed for the Colombian Pacific, the michaelis race for the northeast of the country and palmitae for the east fall within the range of variation of other races so their validity is uncertain.