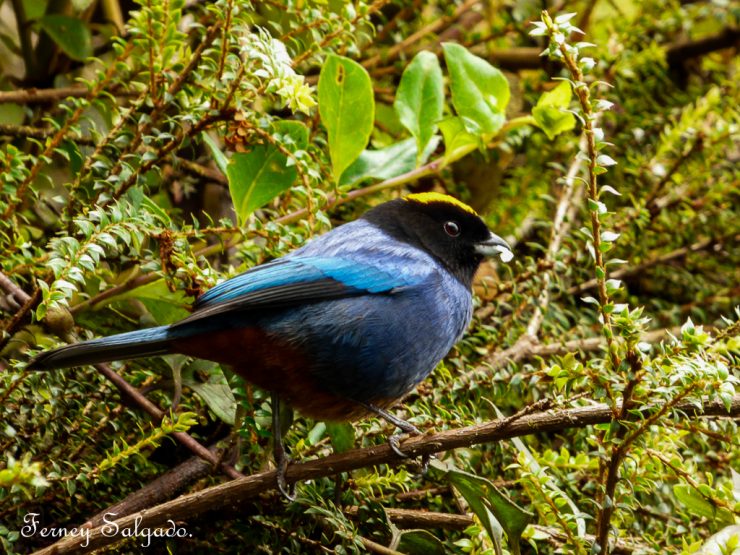 The size of the bird is 15 cm and weighs between 18 and 28 g. Both sexes are similar. Its bill is black above and pale gray below, the legs are black and the iris is dark reddish brown.

The head, neck and throat have an intense black color, it has a large golden circular spot on the crown (1); the wings and tail are black with purple-blue margins, the lower abdomen and the undercuts (2) are brown, and the rest of the body is an intense purple-blue color. Juvenile (3) is dark, with the spot on the crown more opaque and smaller. (Hilty & Brown, 1986, 2001; Hilty, 2016)

In low light it can be confused with the Plushcap (Catamblyrhynchus diadema) but it does not have dark blue underparts.

Present in dense thickets, edges of dense low forest and with a great quantity of mosses, limits of arboreal vegetation.

Not much information is available. Individuals in reproductive condition have been reported between February and August in the Eastern Andes. Some juveniles have been seen in Colombia in May towards Cundinamarca and Cauca, in Ecuador in March and July, in Peru in June, September and October; a dependent juvenile was reported in the PN Puracé-Colombia

There is no evidence of population decline, although the felling of trees, the opening of forests and human colonization have a great incidence in the reduction and loss of habitat, as well as in the fragmentation of high mountain bird populations.

From stomach contents it is known to feed on plant matter, fruits, seeds and insects. Usually forages 0.5 to 5 m above the ground.

It is a calm species; the calls can be a sharp «siiip» or also a short note «tsit»