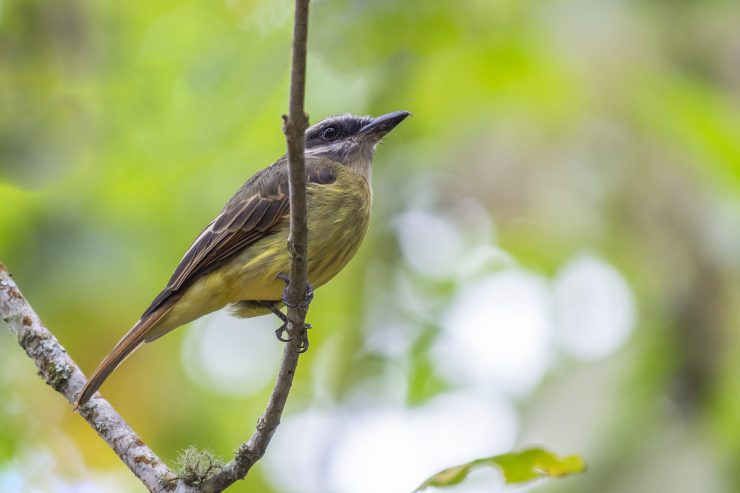 This is a mainly mountain flytrap, although it can also be seen at low altitudes on the Pacific slope. His name Myiodynastes means lord of the flies, derived from the Greek roots muia = fly and dynastes = lord, sovereign, prince. The epithet chrysocephalus means with the golden head, coming from the Greek roots krhysos = gold and kephalos = head.

Its length is 20 centimeters. It has a contrasting head pattern reminiscent of a Bichofué, but is duller and has a blackish mustache. Its crown is greyish brown, it has a golden patch on the crown that is usually hidden, a blackish eye band bordered below by a long white stripe, its cheeks and throat are buff, separated by its long blackish mustache. Above it is grayish-olive brown, wings and tail with prominent rufous margins. He is pale yellow underneath, his chest and sides marked with a diffuse olive-hued streaking.

It is reminiscent of the Boat-billed Flycatcher (Megarynchus pitangua) and the Sulphur-bellied Flycatcher (Myiodynastes luteiventris) but is distinguished from both by its buffy throat, whiskers and diffuse pectoral striatum, as well as by its mountain forest habitat.

Three subspecies M. c. minor, M. c. cinerascens and M. c. chrysocephalus. The minor subspecies is found in western and eastern Colombia across the Andes, while ssp cinerascens is present in the north of the country.

Between 900 and 2400 meters above sea level, but it goes down to 400 meters on the Pacific slope of the west mountain range in Cauca´s valley. In the rest of the country in the Sierra Nevada de Santa Marta, in the Serranía de Perijá and in the Andes and the Serranía de la Macarena. Also, east of Panama and north of Venezuela, south through the mountains to Bolivia.

It is common in humid and very humid forest, usually near edges on steep slopes. It is the cloud forest equivalent of the Streaked Flycatcher.

It feeds on insects which it catches by searching through foliage or by flying from an exposed perch.

Individuals in reproductive condition have been recorded between the months of May and July in the Sierra Nevada de Santa Marta, Serranía de Perijá and in the Andes. Chicks have also been observed in August, in the Sierra Nevada de Santa Marta and in the Valle del Cauca. Its nest is a cup made of moss that it builds on an escarpment, crevasse, rocky slope on the road, hole in a ravine or in a tree cavity. Lays two opaque cream eggs finely dotted with reddish brown.

Seen solitary or in pairs, often nodding while perching erect, but slightly stooped, usually standing tall and exposed on a bare branch near foliage. It attracts attention with its irritating calls, flutters and traps insects or fruit in the treetops, follows mixed flocks with profusion of calls.

The taxonomic affinities of the genus are not yet resolved. However, the evidence suggests that the present species is the sister of Myiodynastes hemichrysus, previously considered conspecific, in turn, these two are the sister group of the clade that make up M. maculatus and M. luteiventris.

In the international arena, it is considered a species of minor concern