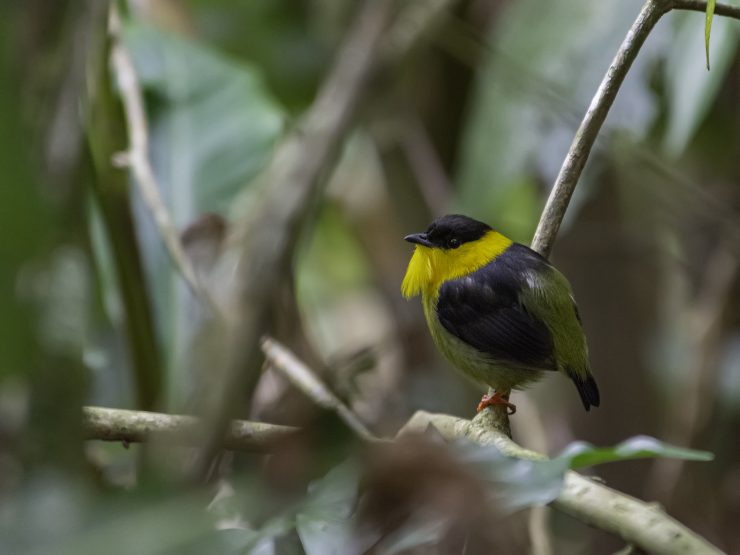 The Golden-collared Manakin(Manacus vitellinus), is a species of passerine bird belonging to the genus Manacus of the Pipridae family. It is native to southeastern Central America and extreme northwestern South America.

The species M. vitellinus was described for the first time by the British naturalist John Gould in 1843 under the scientific name Pipra vitellina; «Panama City» type locality.

The Golden-collared manakin is a compact stubby bird with a short tail, broad and rounded wings, a big head and reddish orange legs. The Male has a bright golden yellow collar and throat, the feathers are long and stiff; otherwise mostly black above with the center of back and rump and lower underparts being olive. The female has dull olive green above, becoming paler and more yellowish olive green below. The wing feathers are heavily modified and are used to make snapping and buzzing sounds.

The four species of this genus form a superspecies and have already been treated as conspecific as Manacus manacus. Alternatively, some authors consider the present species conspecific only with Manacus aurantiacus. The present hybrid with Manacus candei in northwest Panama, and the resulting form has already been described as the Manacus cerritus species. It also hybridizes with M. manacus in Colombia, in the lower Cauca valley.

According to the classification of the International Ornithological Congress (IOC) 6 and Clements Checklist v. 2015,7, 4 subspecies are recognized, with their corresponding geographical distribution: 4

It is distributed from the northwest of Panama to the west of Colombia, west of the western Andes.

It is common in the dense understory on the edges of humid forests, mainly below 1000 meters above sea level.

Male Golden-collared manakins clear leaf litter from the ground to form courts, which are used as display arenas. When courting the male will do a dance to attract the attention of females.

Feed low in the trees on fruit and some insects, both plucked from the foliage in flight.

Reproduction: Males of this species perform near one another, each in a cleared area of forest floor with one or two slender trees serving as perches for their displays. Once a female manakin selects a mate, she constructs a small shallow, open cupped nest near the ground. The nest is made of fibrous vegetation and animal hairs. She receives no help from the male after mating. Two eggs are laid, which are usually marked with dense brown and other dark colors which help to camouflage the eggs, looking like dead leaves. Females incubate the eggs for 14 to 24 days, then feed the nestlings a regurgitated mixture of fruit and seeds for 10 days or more until the young fledge. Youngsters may follow their mother for a month or more before becoming independent.

Status: Listed as Least Concern on the IUCN Red List.

Vocalizations/sounds: The male is adept at showing his colors at watchful females and possible predators. Moonwalking is the unusual dance of these manakins; they use their feathers and fiercely flapping wings to produce buzzes and hums. But the bird actually moonwalks, glides on the branch backwards. The males produce a variety of sounds. His elongated feathers, arranged like a beard under his throat, can be bunched together like a pointing finger, parallel with its beak. He then darts between branches making an almost