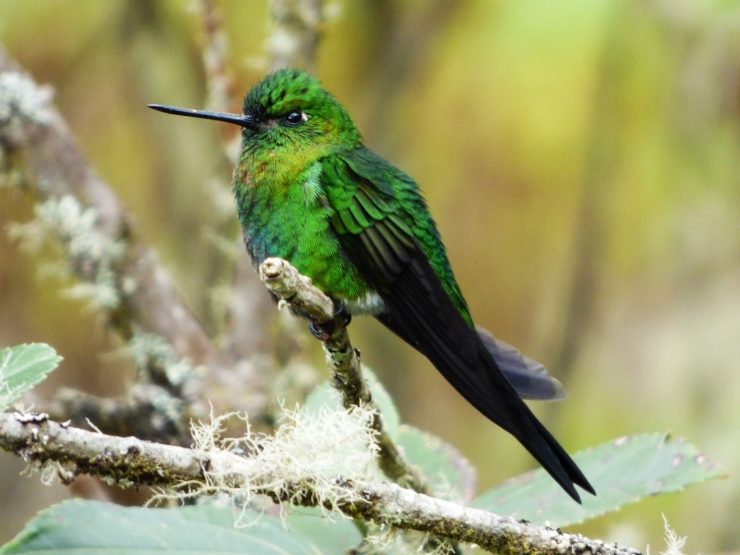 The size of theGolden-breasted Pufflegis 12 to 13 cm and weighs between 5.2 and 5.8 g. It has a straight black beak; the upper parts are bright green and the lower parts are iridescent green; the neck, chest and belly are more iridescent coppery green.

It has a long and very forked tail of greenish-black color, with bluish-green central feathers; infracaudad dull brown color. It has white down on the tarsi. The female is similar to the male, but has shorter wings and tail. The juvenile is probably similar to the female.

It can be confused with other Eriocnemis but this species has a coppery-green chest, is large, has a greener tail (less bluish-black than other Eriocnemis), and its infracaudals are opaque (and not purple).

It is found in Ecuador and Colombia, in the PN Puracé, in the Western Cordillera from Cauca to the South; in the Central Mountain Range from the South of Caldas to Nariño and in the Eastern Mountain Range towards Bogotá.

Present in stunted forest, forest edges, clearings with the presence of bushes and adjacent tree lines between 1,200 and 3,600 m in height.

It feeds mainly on flower nectar on the outside of bushes and clearings with bushes. It is very territorial and aggressive; while feeding it can stay in the air or hold a few moments from the flowers.

It is a solitary bird, which remains in the flowers of bushes and bushes, of diurnal habit

Reproductive activity has been reported in November. Makes a cup-shaped nest with moss, small sticks, and fine plant material; He usually builds it on a hanging branch or under a rock that provides protection from the rain. Usually the female lays 2 white eggs

Its population density has not been quantified, but the species is listed as «common» (Stotz et al. 1996).