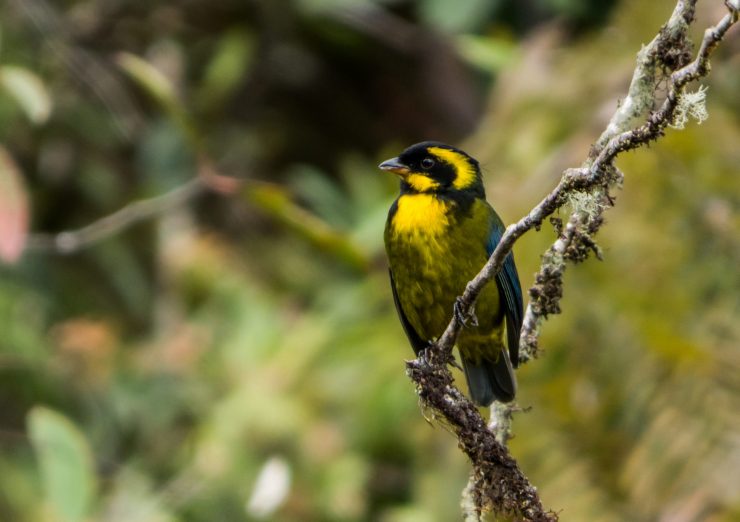 The Tatamá Bangsia is an Endemic bird of Colombia and as its common name indicates it was found in the Cerro de Tatamá. Its scientific name means Bangsia surrounded by gold-colored bands. His epithet Bangsia was coined in recognition of the work of the North American zoologist and collector Outram Bangs. Aureocincta derives from the Latin aureo = gold and cincta = bands.

It measures between 15 and 16 cm with an average weight of 41.7 g. The male has a black head, throat and sides of the chest and has a bright yellow ring that begins at the top of the eye surrounding the headphones, and extends to the base of the bill. Above it is mainly moss green with brownish blue wings. Underneath it is yellowish olive with an extensive golden yellow pectoral patch. The female is similar to the male but with the black parts replaced by dark olive green.

It can be confused with the Blue-faced Bangsia (Bangsia edwardsi) but this one has the sides of the head and the crown of blue color.

It is a local and rare bird that is distributed between 1,500 and 2,200 meters above sea level. It is an endemic bird of Colombia known only at the headwaters of the San Juan River, located on the Tatamá hill on the border of the departments of Risaralda, Chocó and Valle del Cauca.

It lives in humid mountain forests with different degrees of intervention.

It feeds mainly on fruits and sometimes some insects. It has been recorded feeding on mistletoe fruits and species from the Ericaceae and Rubiaceae families.

Previously located in the genus Buthraupis, but this classification was not supported based on recent molecular and genetic studies, from which it was placed in a separate clade.

It is a species considered in danger of extinction. Deforestation, colonization and mining have been identified as the main threats to this species. In the area where this species is found there is a good portion of undisturbed forest above 1500 m in height, however the continuous deforestation that occurs below 1000 m in altitude threatens to continue its ascent. Another threat that could affect this species is the construction of roads, since it would reduce the forest cover in the area and allow the entry of new settlers. Additionally, the presence of guerrillas in the area prevents the execution of studies that allow knowing its natural history and the current state of the populations of this species.