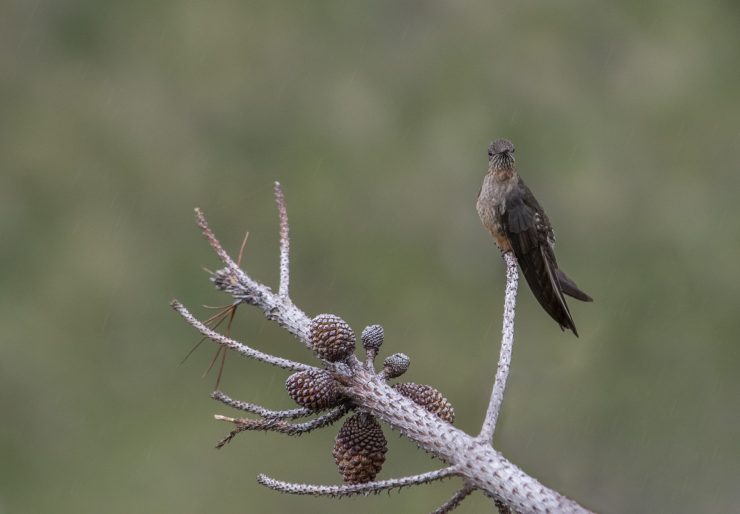 The giant hummingbird (Patagona gigas) is the only member of the genus Patagona and the largest member of the hummingbird family, weighing 18–24 g (0.63–0.85 oz) and having a wingspan of approximately 21.5 cm (8.5 in) and length of 23 cm (9.1 in). This is approximately the same length as a European starling or a northern cardinal, though the giant hummingbird is considerably lighter because it has a slender build and long bill, making the body a smaller proportion of the total length. This weight is almost twice that of the next heaviest hummingbird species, and ten times that of the smallest, the bee hummingbird.

In Bolivia, the giant hummingbird is known in Quechua as burro q’enti, the Spanish word burro referring to its dull plumage. Members of P. gigas can be identified by their large size and characteristics such as the presence of an eye-ring, straight bill longer than the head, dull colouration, very long wings (approaching the tail tip when stowed), long and moderately forked tail,[ tarsi feathered to the toes and large, sturdy feet. There is no difference between the sexes. Juveniles have small corrugations on the lateral beak culmen.

Belonging to the family Trochilidae (hummingbirds), P. gigas is one of approximately 331 described species in this family, making it the second largest group of new world birds. Trochilids are further divided into about 104 genera. It is thought that the species is comparatively old and, for the most part, a failed evolutionary experiment in enlarging hummingbird size given it has not diverged and proliferated.

Traditional morphologic taxonomic inquiries show P. gigas to be substantially different from the other taxa of hummingbirds. A 2008 phylogenetic review found a 97.5% likelihood that P. gigas has diverged substantially enough from the proposed the closest phylogenetic clades to be considered belonging to a single-species clade named Patagonini.[14] This is in accord with International Ornithological Union’s taxonomic classification of P. gigas in a genus of its own.

Two subspecies, P. gigas gigas and P. gigas peruviana, are recognized. These subspecies are thought to have emerged as a result of partial geographical separation of populations by volcanic activity in the Andes predating the Miocene; however, there remain areas of contact between the species, hence the lack of full speciation. The proposed phylogenetic system for hummingbirds suggested by McGuire et al. (2009) accommodates the possible elevation of these subspecies to species rank.

The giant hummingbird is widely distributed throughout the length of the Andes on both the east and west sides. P. gigas typically inhabit the higher altitude scrubland and forests that line the slopes of the Andes during the summer and then retreat to similar, lower altitude habitats in winter months. The species persists through a large altitude range, with specimens retrieved from sea level up to 4600 m. They have shown to be fairly resilient to urbanization and agricultural activities; however, the removal of vegetation limits their distribution in dense city areas and industrial zones.

P. g. peruviana occurs from Ecuador to the southeastern mountains of Peru and P. g. gigas from northern Bolivia and Chile to Argentina. Contact between subspecies is most likely to occur around the eastern slopes of the north Peruvian Andes.

The range of Patagona gigas is sizable, and its global extent of occurrence is estimated at 1,200,000 km2. Its global population is believed to be not less than 10,000 adults.

Hummingbirds are extremely agile and acrobatic flyers, regularly partaking in sustained hovering flight, often used not only to feed on the wing but to protect their territory and court mates. P. gigas is typical in that it will brazenly defend its precious energy-rich flower territory from other species and other giant hummingbirds. These birds are typically seen alone, in pairs or small family groups.

P. gigas hovers at an average of 15 wing beats per second, very slow for a hummingbird. Its resting heart rate is 300 per minute, with a peak rate of 1020 per minute. Energy requirements for hummingbirds do not scale evenly with size increases, meaning a larger bird such as P. gigas requires more energy per gram to hover than a smaller bird. P. gigas requires a estimated 4300 calories per hour to sustain its flight. This huge requirement, along with the low oxygen availability and thin air (generating little lift) at the high altitudes at which the giant hummingbird usually lives, suggests that P. gigas is likely to be very close to the viable maximum size for a hummingbird.

P. gigas is feeds mainly on nectar, visiting a range of flowers. The female giant hummingbird has been observed ingesting sources of calcium (sand, soil, slaked lime and wood ash) after the reproductive season to replenish the calcium used in egg production; the low calcium content of nectar necessitates this extra source. Similarly, a nectar-based diet is low in proteins and various minerals, and this is countered by consuming insects on occasion.

P. gigas regularly feeds from the flowers of the genus Puya in Chile, with which it enjoys a symbiotic relationship, trading pollination for food. As a large hovering bird, particularly at high altitudes, P. gigas has extremely high metabolic requirements. It is known to feed from columnar cacti, including Oreocereus celsianus and Echinopsis atacamensis ssp. pasacana, and Salvia haenkei. We do not know the exact scope of its diet, but inferring from the large amount of nectar required to be routinely ingested by such a large hummingbird, it is safe to say it is a generalist out of necessity: the more different flowers it will feed from, the more efficiently it can collect energy.

There is little known of P. gigas’s reproduction, leaving us to draw on educated generalizations from other hummingbird species. Hummingbird males tend to have polygynous, occasionally promiscuous, behaviors and no involvement after copulation. The female builds the nest and lays a clutch of two eggs during the summer. A P. gigas nest is small considering the size of the bird, typically made near water sources and perched on a branch of a tree or shrub parallel to the ground.

P. gigas migrates in summer to the temperate areas of South America, reaching as low as 44° S. Correspondingly, it migrates north to more tropical climates in winter (March–August), though not usually venturing higher than 28° S.