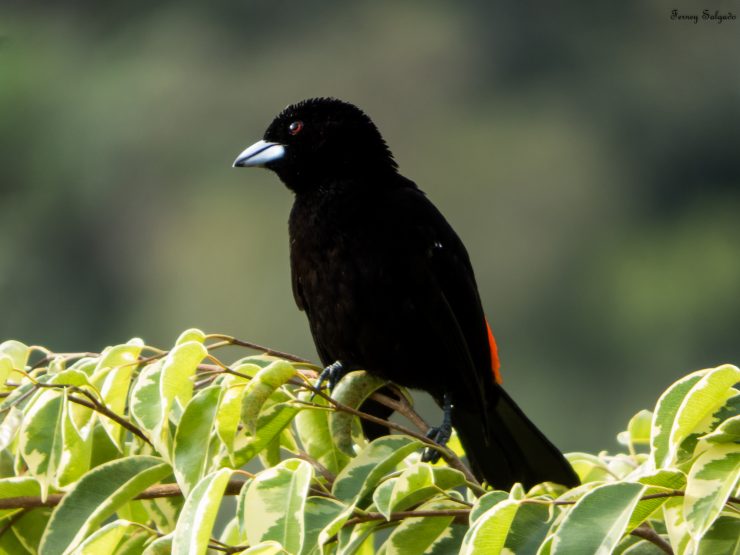 Sometimes referred to, equally appropriately, as Yellow-rumped Tanager, this species occurs from western Panama south through Colombia to western Ecuador. Throughout most of its range (except Colombia’s Cauca Valley) the male is velvety black with the exception of the bright lemon-yellow rump and lower back, and have a largely pale bill, whereas the female is blackish brown above with an orange-red rump patch, and yellow below with an orange breast band. Like most other Ramphocelus tanagers this is a sociable bird, being typically found in monospecific flocks, which inhabit shrubby semi-open areas in lowland regions.

See R. icteronotus. Present species is very similar in appearance to both R. passerinii and R. costaricensis, but sequence divergence from them is 4.7%. Monotypic.

Usually treated as conspecific with R. flammigerus, and genetic differences apparently minimal; moreover, owing to recent deforestation the two taxa now reportedly meet and interbreed in W Andes of Colombia (along a narrow but stable band at middle elevations on upper Pacific slope); even so, visual divergence striking. No races of present species described, but females and immatures from W Ecuador are more olive, less brown or grey, above than those farther N; further research required. Monotypic.

W Colombia on both slopes of Cauca Valley from C Antioquia S to Cauca, the upper Patía Valley in SW Cauca, and locally on W slope of Andes (mostly as expansion across low passes from Cauca Valley, from Risaralda, on upper R San Juan, S to NW Nariño); also W slope of E Andes above Magdalena Valley, in Santander.

Panama from Caribbean slope in Bocas del Toro E across both slopes (from foothills of Veraguas) to Colombia (N base of W Andes, lower Cauca Valley and E to middle Magdalena Valley from Santander S to N Tolima, and on W slope of E Andes) and S along Pacific coast to SW Ecuador (Guayas, El Oro, W Loja) and adjacent NW Peru (Tumbes).

Thickets, bushy forest borders, overgrown clearings, pastures and shrubbery around settled areas, dooryards, gardens and plantations; in Panama shows affinity for vicinity of water, although this not the case in Colombia. Sea-level to c. 1000 m; in Colombia occasionally to 1400 m, rarely to 2100 m.

Movements (possibly by wandering individuals) from E slope of W Andes to W slope not well documented; present in Anchicayá Valley (1050 m) only in Nov–Jan in 1972–1973.

Resident over most of range, perhaps either scarce or a seasonal visitor on Pacific slope of Canal Zone region of Panama.

Fruit and arthropods. Most often seen singly or in pairs, and less often in small family groups; unlike R. icteronotus, seems not to troop around in noisy groups. Perches on branches to take fruits, and perches on and pecks at large fruits. Occasionally sallies to seize aerial insects; also picks insects from foliage and grass. Behaviour otherwise much like that of R. icteronotus.

Of eight stomachs examined, six contained only vegetable matter and two contained both vegetable and animal matter; contents included orthopterans, beetles (Coleoptera), fruit and seeds. Recorded as eating more than 22 species of fruit (72% of 170 feeding records), including those of melastomes (30% of all fruit eaten), especially Miconia berries, Cecropia (27%) and Ficus (19%). Occurs in pairs, in families, and in noisy, conspicuous groups of up to a half-dozen or more individuals, which spend most of the time in fussing and calling from thickets and shrubbery or in visiting small fruiting shrubs and trees. Often calls and flicks wings and tail in agitated manner, especially prior to flight. In W Valle, in Colombia, foraged mostly below 9 m (median height c. 7·5 m) but regularly went to tops of 25-m trees for fruit. Normally perched on twig or branch to take fruit or berries, which were swallowed whole, and perched on and pecked pieces from large fruits such as bananas, Cecropia catkins. Rarely took berries by sallying, but about half of 49 observations of insect-catching involved short sallies to air. Also peered and picked insects off foliage, grass, ferns and other substrates. Sometimes insect-searching was acrobatic, involving hanging from leaves or twigs.

Nest found in Feb in Calima Valley (W Valle) and four breeding-condition birds in Jul near Popayán (upper Cauca Valley). Calima Valley nest an open cup placed in low weeds. Eggs pale blue, marked with dark brown or black spots and sometimes with a few short lines, which may coalesce in wreath around large end. No other information.

Season Feb to mid-May in Panama; in Colombia, nesting reported Dec through mid-Apr in W Valle del Cauca, and eleven breeding-condition birds Feb–May in NW; fledged young with adult in early Mar in SW Ecuador (Tambo Negro, in Loja). Nest a compact open cup of leaves and plant fibres, often with leaves and lichens on outside, placed 2–5 m up in bush or tree. Clutch 2 eggs, infrequently 3, blue or greenish-blue marked with black, brown or lavender, sometimes in wreath around large end; in captivity, female alone incubates, period 11–14 days, chicks fed by both adults, and nestling period 12–14 days. Immature males in female-like plumage may breed.

Not assessed. Usually treated as conspecific with R. icteronotus. Restricted-range species: present in Colombian Inter-Andean Valleys EBA. Uncommon to locally fairly common. On Pacific coast seems nowhere to be as locally numerous as R. icteronotus, and distribution may be somewhat patchy. Occurs in several inter-Andean protected areas, including Reserva Hidrográfica de Río Blanco (in Caldas), Reserva Reinita Cielo Azul, Lago de Sonso Natural Reserve and Bosque Yotoco Reserve. This species’ adaptation to a variety of second-growth and disturbed habitats buffers it against potential threats and allows it, at least locally, to profit and expand, especially to higher elevations, as forested areas are opened up and settled. Short-term risks seem minimal.

Not assessed. Usually treated as conspecific with R. flammigerus. Locally common to uncommon. Occurs sparingly in Caribbean W Panama, progressively more numerous to E; common and conspicuous in Darién (E Panama), Chocó-Pacific region of Colom­bia and S into Ecuador. Sightings in Tumbes Reserved Zone, in NW Peru. Found in many protected areas and is particularly numerous in second growth, disturbed and settled areas that are not formally protected. Has profited from partial deforestation and is almost certainly much more numerous and widespread now than formerly. No near-term risks are associated with this species.

Dawn song, delivered from top of low bush or sapling, an energetic series of mostly 2-note or 3-note phrases repeated over and over as male perches upright, with rump exposed and puffed out and wings drooped. Commonest call a loud slightly nasal “chink”. Vocalizations similar to those of R. icteronotus.

Dawn song, from top of low bush or sapling, an energetic and somewhat musical “tseee-yah” repeated tirelessly as male sits rather upright. Songs, sometimes varied slightly, or with occasional harsh notes added, given only during breeding season in Panama, but most of year in W Colombia (where climate far less seasonal); as with congeners, singing male droops wings and tail and slightly ruffles back and rump feathers to display as much colour as possible. Often rather noisy, groups constantly uttering loud, slightly nasal “chink” as contact notes and more rapidly in alarm; variety of other notes, some hoarse, others disyllabic, and rattle-like calls.