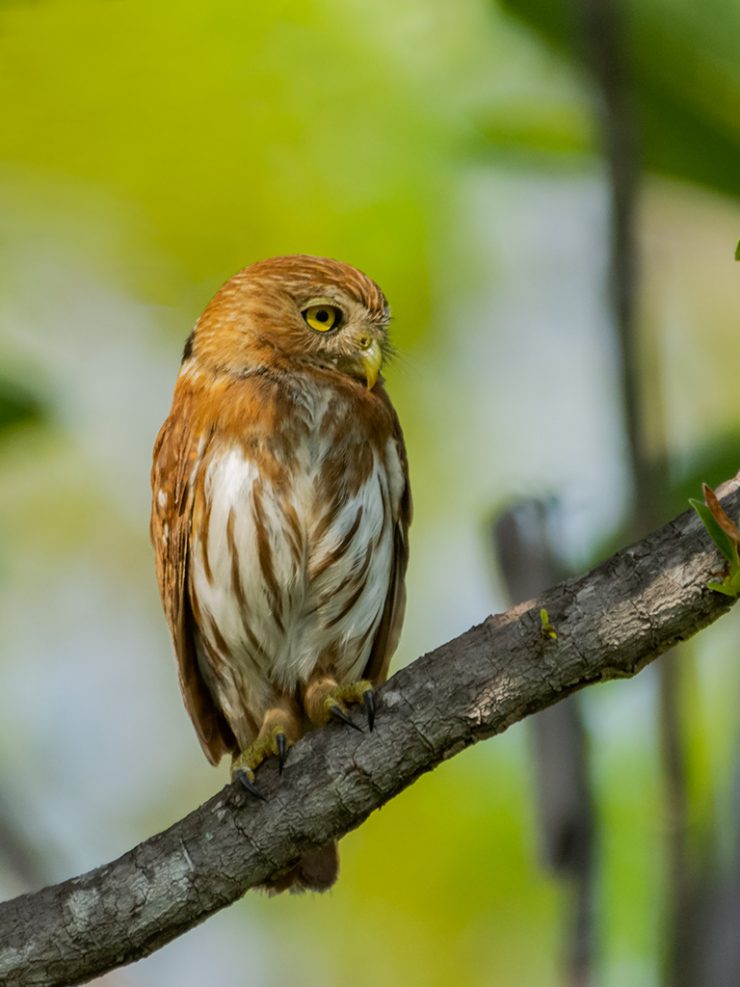 The ferruginous pygmy owl (Glaucidium brasilianum) is a small owl that breeds in south-central Arizona and southern Texas in the United States, south through Mexico and Central America, to South America into Bolivia, Colombia, Paraguay and Argentina.

In Central America and South America, it is the most widely distributed pygmy owl and is probably one of the most numerous owl species in those areas. It is found in a wide range of semi-open wooded habitats in these areas.

This species is a part of the larger family Strigidae of owls, known as typical owls. This family contains most species of owls.

Trinidad, as well as other localities, have endemic subspecies of the Glaucidium brasilianum owl. Recent genetics work has found substantial differences in ferruginous pygmy owls from different regions and members of the northern ridgwayi group are sometimes considered a separate species, the Ridgway’s pygmy-owl (Glaucidium ridgwayi).

The ferruginous pygmy owl is small, typically 15 cm (5.9 in), and stocky with disproportionately large feet and talons. The crown has elongated white/buff streaks, the wing coverts have white spots, and the underparts are heavily streaked white. There are prominent white supercilia above the facial disc. There are dark two spots on the nape, often termed «false eyes» by birders.

Otherwise, its overall color is highly variable, ranging from grey-brown with a black-and-white barred tail to rich rufous with a uniform rufous tail. Sexes are similar with females slightly larger and often more reddish.

Most Ferruginous Pygmy-Owls are generally rufous («ferruginous») in color, especially east of the Andes, but the plumage also may be a duller brown or gray-brown. This species shares the common pygmy-owl plumage pattern, with two large black marks («false eyes») on the back of the neck, and white underparts with coarse streaks. It can be difficult to distinguish from other species of Glaucidium strictly by sight; the adult of the Ferruginous has short white streaks on the crown, however, but most of other species have spotted crowns. The song, a long series of short whistles, is a familiar sound; pygmy-owls often respond aggressively to imitations of this song, approaching the source in a rapid, direct flight. Ferruginous Pygmy-Owls sometimes are active by day, although they primarily are crepuscular. They prey on large insects and small vertebrates, including small birds that may be almost as large as the owl.

The Ferruginous Pygmy-Owl is one of the most widespread birds of the lowlands of the Neotropics; the distribution of the species extends from the southern United States south to central Argentina.

This species occurs in a wide variety of habitats. It does not occur in closed-canopy forest, although it is found at forest edge, but otherwise is found in almost any wooded habitat including arid scrub, dry forest, evergreen forests, coffee plantations, and towns.

This species is crepuscular, but often hunts by day. It hunts a variety of birds, lizards, mammals, and insects. The flight is often undulating in motion, similar to that of many woodpecker species.

It can be readily located by the small birds that mob it while it is perched in a tree (up to 40 birds of 11 species have been recorded mobbing one owl).

The northernmost subspecies, G. b. cactorum, commonly called the cactus ferruginous pygmy owl, was a listed Endangered species under the U.S. Endangered Species Act. This protected it in south-central Arizona from loss of habitat and buffel grass fires. Buffel grass catches fire very easy, which spreads to cacti, burning the owl’s primary habitat.

Its range extends over the border into Sonora, Mexico. Glaucidium brasilianum was delisted in 2006.

The call is a whistled hoo-hoo-hoo-hoo, usually in E flat. It is easily imitated, and is used by birdwatchers to attract small birds intent on mobbing the pygmy owls.

The Glaucidium brasilianum mating season is from late winter to early spring. It is a cavity nesting bird (tree and columnar cactus cavities), laying 1-7 white eggs. Incubation is 28 days, with 27–30 days to fledging.