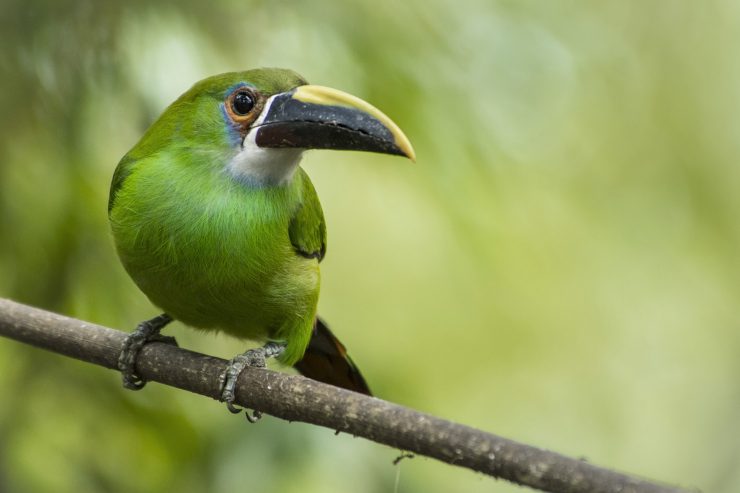 The emerald toucanet is a near-passerine bird occurring in mountainous regions from Mexico, through Central America to northern Venezuela and along the Andes as far south as central Bolivia. Some taxa currently included in this species are sometimes split into separate species (see Taxonomy).

Like other toucans, the emerald toucanet is brightly marked and has a large bill. The adult is 30–35 cm (12–14 in) long and weight can range from 118–230 g (4.2–8.1 oz). The sexes are alike in appearance, although the female generally is smaller and slightly shorter-billed. It is, as other members of the genus Aulacorhynchus, mainly green. The vent and tail-tip are rufous. The bill is black with yellow to the upper mandible (amount depends on the exact subspecies) and, in all except the nominate (prasinus) and waglerigroups (see Taxonomy), a white band at the base of the bill. The members of the caeruleogularis group have a rufous patch near the base of the upper mandible, while some members of the albivitta group have a rufous patch near the base of the lower mandible. The throat is white in the nominate and the wagleri group, blue in the caeruleogularis and cognatus group, pale grey-blue in the lautusgroup, blue or black in the atrogularis group, and white or grey-blue in the albivitta group. The eye-ring ranges from blue to red, in some subspecies very dark, almost appearing blackish from a distance. The legs are dull greyish and the iris is dark.

Juveniles are duller, including the throat, and, depending on subspecies, the black areas of the bill are replaced with dusky or the bill is entirely yellowish.

The emerald toucanet is a generally common in humid forest and woodland, mainly at higher elevations. The 3–4 white eggs are laid in an unlined hole in a tree, usually an old woodpeckernest, but sometimes a natural cavity. Both sexes incubate the eggs for 14–15 days, and the chicks remain in the nest after hatching. They are blind and naked at birth, and have short bills and specialised pads on their heels to protect them from the rough floor of the nest. They are fed by both parents and fledge after about 6 weeks. They are fed for several weeks after leaving the nest.

Small flocks, usually consisting of 5–10 birds, move through the forest in «follow-my-leader» style with a direct and rapid flight. This species is primarily an arboreal fruit-eater, but will also take insects, lizards, small birds, and their eggs.

This subspecies, cyanolaemus, is the only member of atrogularis group with a blue (not black) throat. No other subspecies has less yellow to the bill

It has been suggested that the emerald toucanet actually should be split into 7 species (below described as they roughly occur from north to south):

These splits are mainly based on morphology and plumage as described by Navarro et al. (2001). Their results were preliminary, as they themselves pointed out. As a result, most authorities, notably SACC, do not recognize more than a single widespread species, but recognize the need for a solution to this complex. They are clearly separate species as per the phylogenetic species concept, but judging the species limits as per the biological species concept is difficult due to the entirely allopatric distributions of the various groups.There are no major vocal differences between the various populations, but that in itself is not unusual for separate species that do not overlap.

Genetic evidence has to some extent supported the above splits, although with different borders between the species in the northern Andes, and of the above suggested species, data is lacking for lautus. According to their genetic results, the north Ecuadorian toucanets, which are white-throated and usually included in albivitta, are closer to the atrogularis group than the «true» albivitta of Colombia and Venezuela. Assuming this is correct, it seems likely that north Ecuadorian toucanets represent a new taxon, which should be treated as a subspecies of A. atrogularis. They also found that griseigularis was closer to the atrogularis group than albivitta, but unlike the north Ecuadorian toucanets, they opted for treating it as a separate species, the grey-throated or plumbeous-throated toucanet (A. griseigularis). In that case, A. albivitta is known as the white-throated toucanet. If albivitta and griseigularis are treated as separate species, it is unclear where phaeolaemus belongs, as genetic data for that taxon is missing. In appearance and distribution phaeolaemusis closest to griseigularis, but, inexplicably, it has been suggested it should be treated as a subspecies of A. albivitta. In 2011 it was also suggested that cyanolaemus should be treated as a subspecies of A. albivitta, but this was presumably an error, as it directly contradicts genetic data, which place it in A. atrogularis.

Another potential problem relates to the distribution limit between A. cognatus and A. caeruleogularis in Panama. Although the reason for this treatment is unclear, the population in central Panama has been placed in A. caeruleogularis, which would limit A. cognatus to extreme eastern Panama and adjacent Colombia. According to George Angehr, author of The Birds of Panama, it is possible toucanets from central Panama actually are closer to A. cognatus.

The emerald toucanet is a popular pet toucan. It is affectionate when hand-fed and loves to play and interact with its owner. Emerald toucanets are as quick to learn tricks as cockatoos. They are active and need a large cage for their size, including perches that they can hop back and forth on. They also require a high-fruit diet, without which they are susceptible to a disease of excessive iron storage that is similar to hemochromatosis in humans.