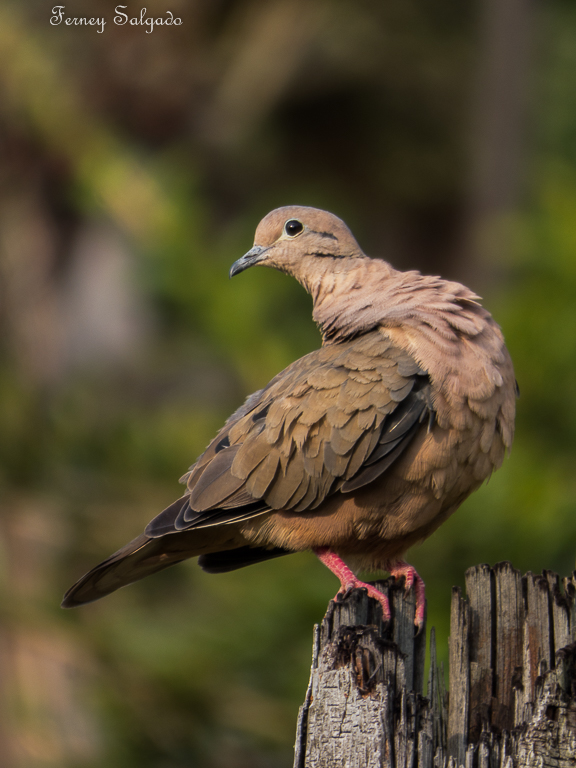 The eared dove is a bird which belongs to the family of Columbidae and the order of Columbiformes.

It is a resident breeder throughout South America from Colombia to southern Argentina and Chile, and on the offshore islands from the Grenadines southwards.

It is found in the Lesser Antilles, Colombia, Venezuela, Trinidad, Guyana, western Ecuador and Peru, Bolivia, central and northern Brazil, Uruguay, central Chile, central and southern Argentina to Tierra del Fuego. In Colombia it is located from 600 to 3000 m above sea level in the north of the country from the Atlantic Department to the Guajira and from there to the south through the Magdalena Valley, the Cauca River Valley, east of the Andes to the department of Meta and the river Guaviare. Also on the western slope of the Western mountain range in the high dry valleys of the Dagua and Patía rivers and in the Central and Eastern mountain ranges.

It is common to abundant in savannahs and other open areas, including cultivation, and it readily adapts to human habitation, being seen on wires and telephone posts near towns in Trinidad and Venezuela, almost in all public spaces of large urban areas such as Bogotá, Colombia and feeding near beach resorts in Tobago.

This is a gregarious bird when not feeding, and forms flocks especially at migration time or at communal roosts.