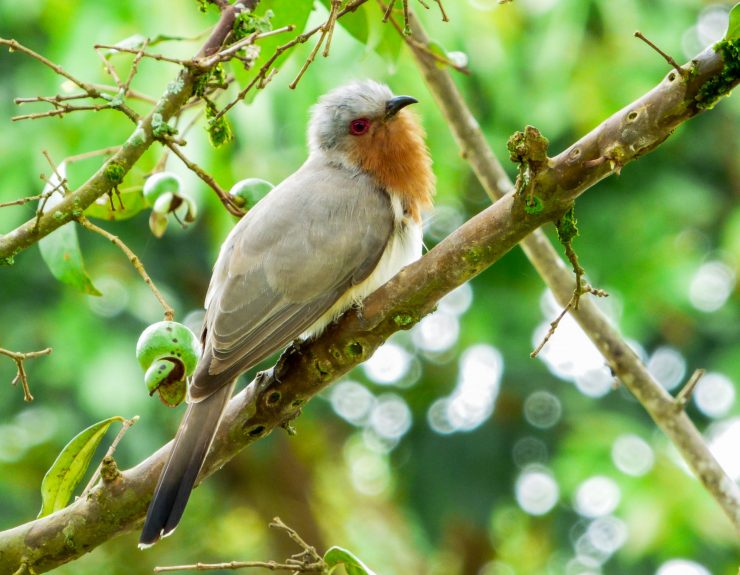 It is an inconspicuous cuckoo that prefers dry areas although it has spread to more humid regions in deforested areas. Its name Coccycua derives from coccys = cuckoo and Coua which is a genus of cuculiform birds endemic to Madagascar. The epithet pumila derives from Latin and means tiny.

It measures about 21 cm and weighs about 36 g. It has a slightly curved black bill, a short tail, an iris, and a bright red eye ring. The adult is brownish-gray above, grayer on the crown. Its throat and chest are rufous, flanks buff and white underparts. Its tail is graduated, distally blackish and with narrow white tips. Juveniles have olive brown irises, yellow eye ring, are more brown above and with a pearly gray throat.

The immature ones can be confused with the Ash-colored colored (Cocczycua cinerea) but the latter has a longer tail, is more buffy underneath and with red eyes and eye ring.

It is found in Colombia and Venezuela. In Colombia it is found mainly from sea level up to 1000 m in height in the Caribbean Region from the eastern department of Atlántico to the east to the south of the department of La Guajira and south to the extreme north of the Serranía del Perijá and the upper valley of the Magdalena river in the south of Cesar. To the east of the Colombian Andes it is found from Norte de Santander to Arauca, Meta and west of Caquetá. It was once collected at an altitude of 2,600 m in Bogotá, and has been recorded at Laguna de Sonso, Buenaventura, Florencia and near Cali in the Pance river basin.

It feeds on insects, especially caterpillars and nymphs of the Membracidae family. It also includes beetles, dragonflies and cicadas in its diet.

Probably breeds throughout the year. It is a monogamous or polyandrous species and sometimes two females can lay in the same nest. Their nest is a shallow, flimsy platform built with sticks, leaves, and tendrils in the crown of a low tree. The size of its position is 2 or 3 white eggs which both sexes incubate. Both parents take care of the chicks, who acquire almost all plumage around day 12 after hatching and leave the nest from day 14 to day 21.

It is a generally solitary and not very active bird that goes unnoticed much of the time. It searches for prey in internal and external branches of vegetation and sometimes forages on the ground. Like other cuckoos, it shakes and jaws its prey before ingesting them, which allows it to eliminate some type of defensive secretion.

It forms a superspecies together with C. cinerea which were previously classified in the genus Coccyzus. Furthermore, it was found that these two species are closely related to Piaya minuta, for which it was decided to classify these taxa in the genus Coccycua in order to resolve the paraphilia with respect to the genus Piaya.