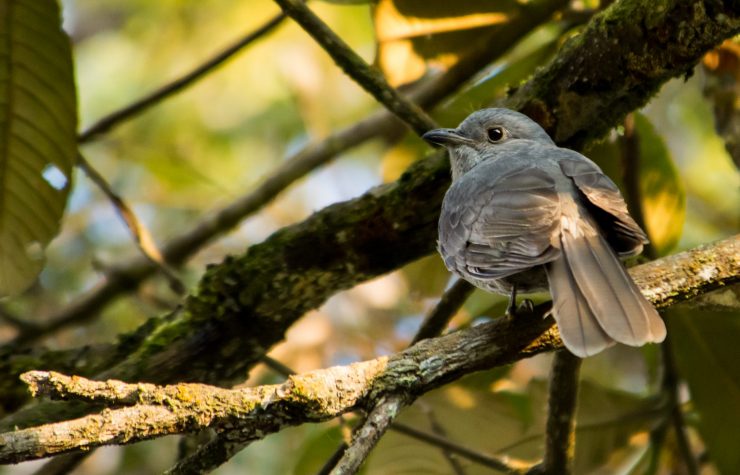 The name of this species refers to its dark color and derives from the Greek lipauges which means dark or devoid of light and from the Latin roots fuscus = dark and cinereus = ash color.

Large bird of approximately 138g in weight, completely gray with slightly darker wings, underparts and tail with a brownish tone. Its beak is short and thick and its tail is notoriously long. Both sexes are similar.

Similar to the Olivaceous Piha (Snowornis cryptolophus), although this one is smaller and not gray green in color. It can also be confused with Band-tailed Pigeon (Patagioenas fasciata) due to its large size, but the latter has a shorter tail, yellow bill, and a distinctive white nuchal band.

It lives in humid montane forest and in tropical rain forest.

It feeds mainly on fruits.

Generally solitary or in family groups and like other cotingas of the genus Lipaugus, it is a species of little activity that perches in the upper part of the vegetation. Captures fruit by short flutters and eventually follows mixed bands. When flying between the trees it almost always emits a call. During the reproductive season the males form «exploited» lecks in which the males are at a distance and maintain auditory but not visual contact and perform behavioral displays to attract females.

Some authors have considered it as a species of the Tyrannidae family and others consider that it forms a superspecies with Lipaugus uropygialis and with Lipaugus weberi.

Its state of conservation does not cause concern