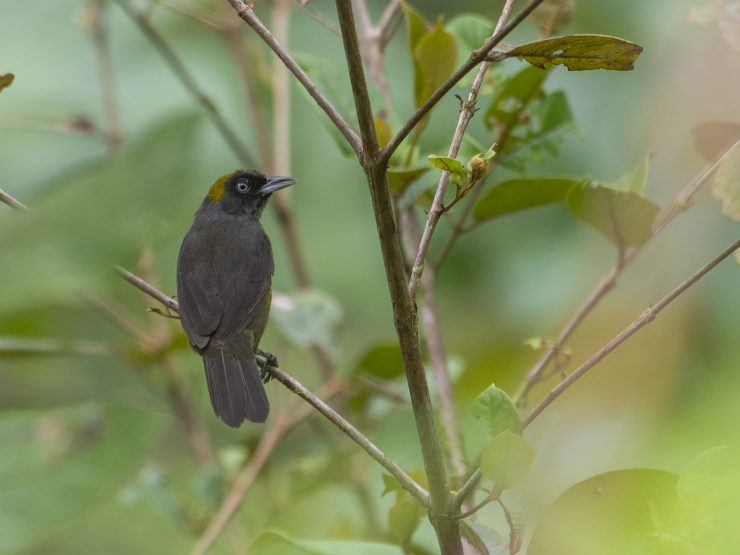 This species is quite gregarious and noisy and is found in the western lowlands of the country. Its name Mitrospingus means crown finch, referring to the coloration of the latter and derives from the Greek roots mitra = crown or hood and spingos = finch. His epithet cassinii was established in honor of the North American ornithologist John Cassin.

It measures approximately 18 cm and weighs 32 to 41 g. It has grayish-white irises, gray legs, a blackish upper jaw with a blue-gray base, and a blue-gray lower jaw. Both sexes are similar. It has a mustard yellow crown, the loreal area, the forehead and the sides of the head are black, forming a mask. The upper part of its throat is dark gray which extends to the lower part of the ear-coverts where it becomes paler. Above is dark charcoal gray with olive tinted uppers. It has a blackish chin and light gray throat which turns olive yellow on the chest, sides and flanks. Its belly and undertail coverts are dark gray. Juveniles are paler than adults, have a mustard yellow crown, but less marked and are dyed buff underneath.

The male could be confused with the Tawny-crested Tanager (Tachyphonus delatrii) but the latter is smaller and entirely black with an orange crest.

It is found from Costa Rica in a southerly direction to western Ecuador. In Colombia, it is found up to 1100 m above sea level on the Pacific Coast and east through the extreme north of the Western mountain range to the Serranía de San Lucas. Also, in Caldas and lower Valle del Cauca.

Reproductive individuals have been recorded between February and May and young individuals in September. It appears to present a cooperative breeding system in which the young are cared for by several adults. Its nest is a voluminous cup which it builds with filaments of fungi and threadlike elements, apparently parts of flowers. The nest is located low (1.5 – 3 m) hanging between two branches of a bush near a stream. Their lay size is 1 or 2 white eggs with brown spots more intensely at the larger end.

It is a strongly gregarious bird, generally staying in large family groups of up to 15 individuals foraging at low altitudes. It moves rapidly through dense vegetation making agitated movements with its wings and tail, so it is almost always out of sight, although it can sometimes be seen more easily when visiting fruit trees. It captures insects mainly on the foliage, especially on large leaves such as heliconia and palms.

Formerly included in the genus Tachyphonus. The taxonomic relationships of this species are not clear and although it has traditionally been classified within the Thraupidae family, a sister taxon or a family with which it is closely related has not been identified.

Her condition is of least concern.