DID YOU KNOW BIRDS CAN BE SAVED BY THE COFFEE YOU DRINK? 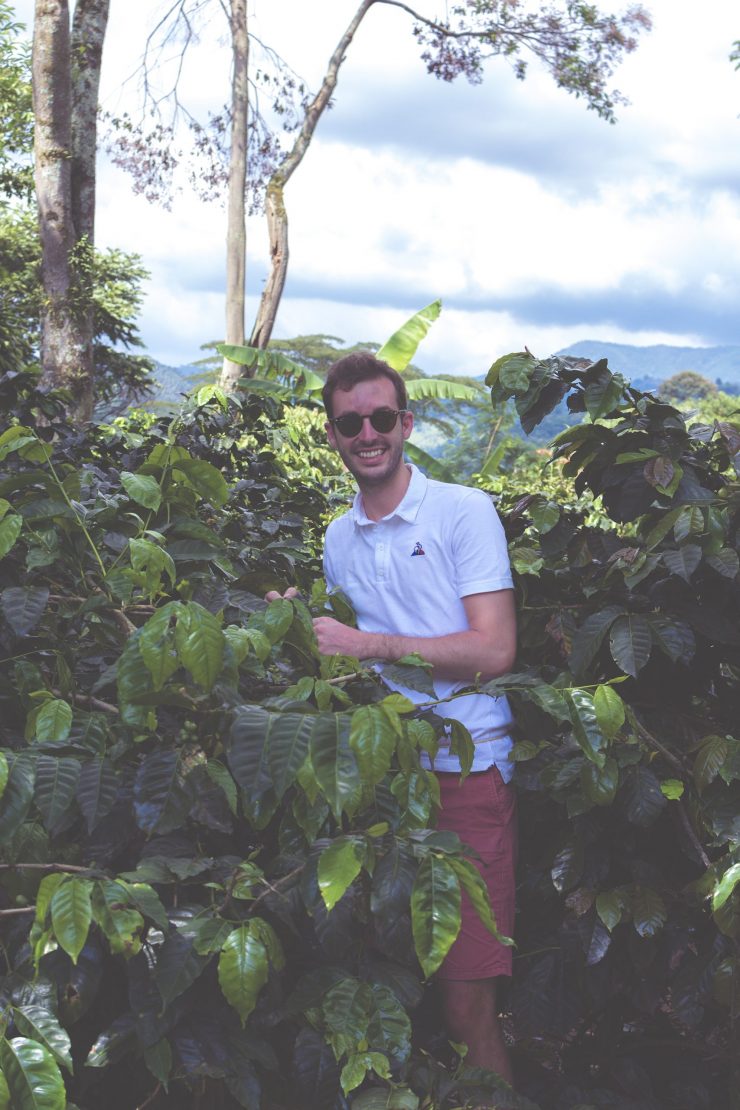 The coffee belt, in fact, is one of the areas with a great diversity and richness of bird species in Colombia. The temperate regions, between 1200 and 1800 meters above sea level, with temperatures between 17 and 23° C and average annual rainfall of around 2000 mm, offer optimal conditions for coffee cultivation, and are also regions that constitute a crucial habitat for many species of birds.

A bit about Coffee History

Coffee originated in Ethiopia, Africa, where it was consumed in infusions or by chewing its leaves. But it was the Arabs who were responsible for its expansion, first throughout the Arab world in the 16th century, then in Europe in the 17th century and finally in America around the 18th century. It is believed that coffee was introduced to Colombia in the early 18th century by Jesuit missionaries, being the main region of expansion of cultivation in Santander and Norte de Santander, in the east of the country. Later, coffee production began to expand to other departments and by 1850 it had reached Cundinamarca, Antioquia and Caldas. By the end of the 19th century, coffee was already the main export product for which Colombia received foreign currency. In the 20th century, the smaller producers made their way and the leadership of coffee development moved to the western part of Colombia.

In 1959 the character of Juan Valdez was born and the Colombian Coffee office was opened in Tokyo, making Japan the second largest consumer of Colombian Coffee in the world. In 1984 the distinctive brand Café de Colombia is created an identifies Colombian coffee in all corners of the world.

Today, coffee crops are grown almost all over the country, except for 9 of the country’s 32 departments where geographical conditions are not suitable for coffee. Conditions such as flat, arid or swampy lands in Sucre, Córdoba, Atlántico, Arauca; or jungle and rocky lands of the Guyanese shield like Guainía, Vichada, Guaviare; or humid, floodable and sandy Amazonian lands like Vaupés and Amazonas.  On the contrary, coffee extends through all the mountain ranges of the Andean region, the Sierra Nevada de Santa Marta and the Serranía del Perijá, as well as in the Pacific and in each of the Andean foothills of the three mountain ranges and the Colombian massif, covering a wide variety of ecosystems.

In recent years, the importance of maintaining a balance between natural ecosystems and crops of any kind has been recognized. In the case of coffee, sustainable practices such as shading the crop with native trees has become an ecological and economic added value. It has already been demonstrated in Colombia that there is a greater diversity of birds and bats in shade-grown coffee plantations attracted to the insects, nectar, and fruit that trees provide, compared to traditional plantations exposed to the sun and devoid of trees. The conclusion is that with greater tree connectivity and the presence of forests in the plantations there is a greater presence of wildlife. Even small increases in tree cover – between 7% and 13% – can make a significant difference to birds.

In Colombia, migratory birds need to find high quality habitats to replenish their energy, and coffee plantations, with a mixed landscape of forest and plantation, offer birds the quality of habitat required to recover. And this applies to resident birds as well. Trees not only benefit coffee and birds and wildlife in general, but they also help maintain soil and water by preventing erosion and landslides, adding nutrients to the soil, storing carbon, etc. There are more than 40 species of North American migratory songbirds that benefit from shade grown coffee, including the Tennessee warbler (Leiothlypis peregrina), Blackburnian warbler (Setophaga fusca), Summer tanager (Piranga rubra), Black-and-white warbler (Mniotilta varia) among others.

It has also been found that the shade favors the slow maturation of the bean, giving it time to develop all its properties, creating a softer coffee because it contains less concentration of carbohydrates (CENICAFE). In traditional crops, sunlight accelerates the production of coffee beans and increases yields, which translates into a faster profit for the farmer but results in a loss of forest, and therefore a loss of wildlife. Every day consumers have become more selective when buying a brand of coffee, and appeal for conditions such as:

In the area of Nariño there is a great variety of plant formations such as dry forests, Choco forest, mountains and paramos, each one differentiable thanks to the altitudinal and climatic level. The Nariño coffee region is surrounded by the Amazon slope and the tropical forests of the Pacific coast, which provide an immense asset of biodiversity. Coffee crops, besides being basic to the economy of the Nariño region, are extremely important in the process of environmental conservation and sustainability. They are home to 33 species of trees used as shade trees, whose supply of seeds, fruits and flowers are used by many birds, especially from the Thraupidae family, specialist birds such as toucans and migratory birds. Nariño has approximately 1048 species of birds, including 155 species with some type of migration and 242 species that are contemplated within one of the criteria for bird conservation at the international level (AICA/IBA). According to a publication in the scientific journal Biota Colombiana (Vol. 12, number 1, Calderón et al 2011) the department of Nariño stands out as an important center for the conservation of birds in Colombia due to its high number of endemic and range-restricted species and the fact that it is considered by some authors as a speciation center, especially for the hummingbird group.

The Coffee Triangle, also known as coffee axis, is a territory composed of six zones located in 47 municipalities of the departments of Caldas, Quindío, Risaralda and Valle del Cauca, surrounded by an area of influence or buffer zone. The geographic position of the coffee axis determines an environment enriched by the influence of the altitudinal gradients of the central and western Andean mountain ranges that generate unique ecosystems producing the so-called coffee cultural landscape (PCC).  The PCC demonstrated an exceptional universal value that incorporates human and family effort, the culture developed around coffee, the social capital generated by the coffee and the coexistence between tradition and technology. These reasons made the Coffee Cultural Landscape be declared as a World Heritage by UNESCO on June 25, 2011.

In studies carried out by the National Coffee Research Center in Colombia (CENICAFE, Technical Report 265), more than 600 species of birds have been registered in the coffee zone, which constitutes more than 20% of the avifauna reported in the country. The most visited birding hotspots in this region are:  National Natural Park Tatamá with recognized sites such as Montezuma Hill in Pueblo Rico, the Cerro de la Línea and the Aguabonita Reserve in Apía, as well as the environmental corridors of municipalities such as Mistrató and Santuario. Los Nevados National Natural Park with all its several access routes, the Otún Quimbaya Flora and Fauna Sanctuary, the Rio Blanco Reserve, the Barbas Bremen Canyon, and the Riosucio road to El Jardin in Antioquia.

According to the Alliance for Critical Ecosystems (ALPEC), coffee growing began in the foothills of the Sierra Nevada de Santa Marta in the first decades of the last century with the establishment of large coffee farms such as Cincinnati, Vista Nieve or La Victoria owned by foreign families. Coffee growing is one of the most important economic and productive activities developed in the Sierra Nevada de Santa Marta and is the engine of the economy in a wide area known as the coffee belt that has an estimated total area of 168,000 ha.

Due to the rainfall, latitude, high slopes, and soil types of the Sierra Nevada, coffee cultivation requires permanent shade. These productive systems present characteristics similar to natural habitats and maintain patches or corridors of vegetation through basins and micro-basins, benefiting the conservation of birds. 72 species of migratory land birds, use those plantations as a place of season and permanence, including 19 species of conservation targets in the USA and Canada. They also benefit endemic or threatened species. Of the 18 species of restricted range distribution (Endemic Bird Area – EBA) in elevations of the coffee zone, 11 were recorded in shaded coffee plantations. Of the 13 threatened species recorded in the coffee zone, 9 species use shaded coffee plantations as their habitat. Know more about the birds you can find at Sierra nevada in the post here.

Santander’s coffee is recognized for its quality and soft flavor, subtly chocolatey and very balanced. It is mostly cultivated with the shade-grown method, which gives it special characteristics and, in addition, protects biodiversity. Santander is the second department in Colombia in terms of the number of species registered, after Antioquia, according to preliminary results of the Santander BIO project, led by the Departmental Administration and executed by the Universidad Industrial de Santander (UIS) and the Alexander von Humboldt Biological Resources Research Institute of Colombia.

According to the researchers, the department has land from the Magdalena Medio to the highlands of the eastern Andean mountain range. This vast transition from dry to humid areas makes the biological diversity very large, even greater than in the Amazon. The outstanding natural areas are the Serranía de los Yariguíes, the Chicamocha Canyon, the Almorzadero Páramo, the Sanctuary of Flora and Fauna Guanentá Alto de Río Fonce, the Paturia Wildlife Sanctuary among others, bringing together paramos, cloud forest, tropical rain forest, wetlands and arid areas.

The richness of birds in Santander is very high, representing almost 8% of the birds of the planet. Birds’ habitat in Santander has been damaged by deforestation due to mining, livestock and agriculture. However, projects have emerged such as the La Mesa de Los Santos Coffee Park, a project created by the farm Hacienda El Roble, which produces one of the finest and most expensive coffees on the planet. In this place there are 300 hectares of shaded coffee with native tree species, benefiting around 126 species of birds. There are other coffee regions, such as Suaita, where it is also possible to find shaded-grown coffee plantations that favors many local and migratory birds.

The south of Huila is a coffee region that borders on natural areas of great interest such as the Guácharos Natural National Park and the Colombian MAssif. Studies in the area conducted by Cenicafe, found about 280 bird species, concluding that the most outstanding environmental condition is the presence of fragments of native oak forests which sustains a great part of the diversity of the area. The coffee crops, which also use the shading system, become important buffers for the loss of habitat in the region. Threatened species such as Dusky-headed Brushfinch (Atlapetes fuscoolivaceus) and Tolima Dove (Leptotilaconoveri), which are protected by these coffee areas, can be found in the coffee plantations.

Now you know that you can make magnificent bird watching tours around shade – grown coffee farms covering almost all the main birding routes in the country and all of the main coffee profiles in Colombia.