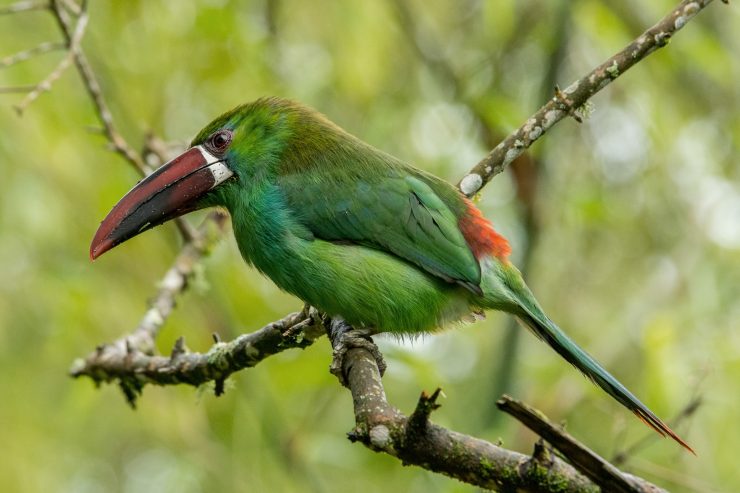 It measures 40 to 45 cm, weighs 141 to 232 g and its peak measures 76 to 81mm. It has a mainly dark red bill with a base outlined in white, a flat black top at its base and a lower jaw with a black central portion. Its body is mainly green with a red rump. It has a bare orange-brown eye area, a blue area on the sides of the chest, above and below the eye, and the central 2 or 3 pairs of tail feathers with brown tips. The female has a shorter bill and the immature ones have duller plumage and orange rump.

It is found in western Venezuela, Colombia and northwestern Ecuador. In Colombia it is distributed between 800 and 2,100 m above sea level (occasionally at altitudes below 300m) on the Pacific slope of the Western Cordillera. Also in the Serranía de Perijá and along the Western and Central mountain ranges from the headwaters of the San Juan River to the south. In the Eastern Cordillera south to the latitude of Bogotá.

It is normally found in the middle and upper strata of humid and very humid forests. It also lives in premontane and montane forests and in secondary mountains. Occasionally on trees scattered in fruit in grasslands and gardens.

It feeds especially on fruits such as Yarumos (Cecropia spp.), Palms and plants of the Lauraceae family. In its diet also includes invertebrates, small vertebrates and young and eggs of birds.

In the Western Cordillera individuals in reproductive condition have been recorded in the month of April and in the Central Cordillera in the months from March to May. Incubation of the eggs is largely carried out by the female, which can last from 16 to 17 days. The chicks are fully fledged after six weeks and start to fly at the seventh week.

Like other species of the genus, it remains in pairs or small groups and sometimes mixed flocks can follow. It is a noisy bird, lurking from the undergrowth to the canopy, leaping up between the trees.

Some authors consider that it forms a superspecies together with Aulacorynchus huallagae (from Peru) and A. coeruleicinctis (from Peru and Bolivia). Genetic analyzes have shown that it may be a sister species to these last two, as well as A. derbianus (North of South America) and A. sulcatus (Colombia and Venezuela).

This and other species of Toucans can prey on smaller birds and eggs.