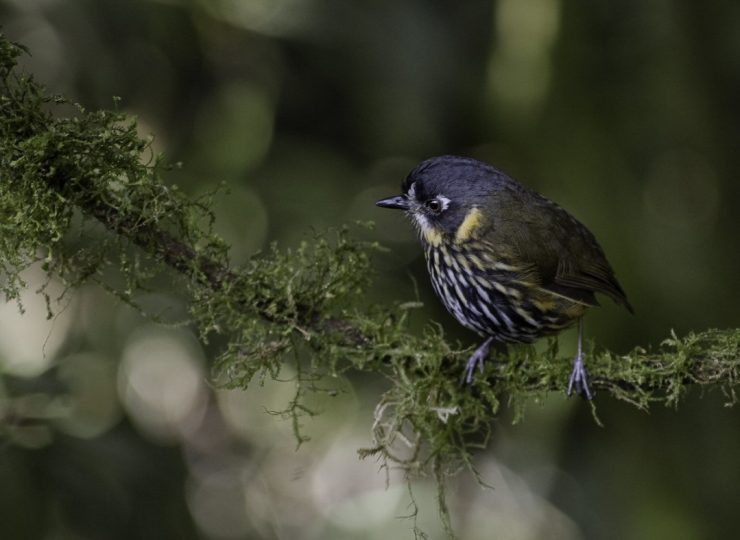 Crescent-faced Antpitta is one of the most strikingly plumaged members of the genus, perhaps even of the entire family Grallariidae family.

Adults are dark brown above with a slate-gray crown and nape, a bold white crescent in front of the eye, and densely streaked buff to whitish underparts.

There is no recorded geographic variation within the limited range of this species. Ecuador in 1923, Crescent-faced Antpitta remained unreported in life until nearly 50 years later. Today, based on regular reports and sighting by tourists and researchers it is known to be more widespread than was previously thought. Its known distribution is somewhat patchy, extending from southern Colombia the central Andes of southern Colombia (eastern Cauca) to southern Ecuador (south to the Zamora river).

Its natural habitat is subtropical or tropical moist montane forests. It is becoming rare due to habitat loss. It is located in the understory of the dense dwarf forest of the high Andes mountains between 2900 and 3400 m altitude. It has been found among vegetation less than 3 m high, with abundant epitism.

It feeds on insects such as grasshoppers, beetles, hippies, hymenoptera and homoptera. Also of spiders and in general it looks for its prey along trunks and branches on the ground.

Usually alone or in pairs, running, walking, or bouncing around the forest floor or on logs. It also perches on tree branches and vines 1-4m above the ground. It does not join mixed flocks. In the dry season it sings very little making its detection difficult.

There is few information about its reproduction. Apparently its reproductive season is during rainy season, between October-November to January-February. A nest was not found to corroborate it.

Conservation Status Its status is almost threatened given its small range and the possible loss of its habitat. However, there is no severe fragmentation in its range, nor is it restricted to a few locations. Its main threat is the destruction of the moorland ecosystems, and it is recommended to carry out further studies regarding its natural history, and to carry out searches for the species in Puracé and the Galeras Volcano to determine its population status.