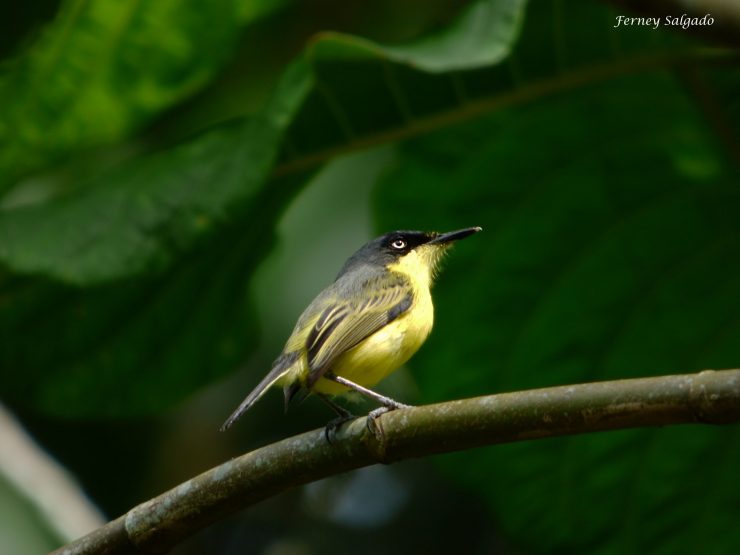 It is 8.8 to 10.2 cm of lenght and weighs between 4.4 and 8 g. Male has glossy black forehead, sides of head and crown with slate gray on occiput and olive on back and rump. Their wings are black with yellow edges and tips of the coverts. The tail is rounded and black with the tips of the outer feathers white. The throat and underparts are bright yellow. It has a yellowish iris and a flat, black bill with a clear base of the lower jaw.

It is found from Mexico to Argentina through Costa Rica, Panama, Colombia, Venezuela, Guyanas, Brazil, Ecuador, Peru, Bolivia and Paraguay. In Colombia it reaches up to 1900 m above sea level. Common in lowlands on the Pacific coast from southwest Cauca (Guapi) to Nariño, and generally west of the Andes (except Guajira) and in the eastern Andes south to its base in Putumayo.

Common in open areas and edges of forest, mangroves and rivers. Also in bushes, pastures, crops, gardens and clearings in jungle areas.

The nest is built by the male and female who take about 37 days. It is globular in shape with a side entrance and usually has a hanging “tail”. They generally build it on a hanging branch between 1 to 5 meters above ground level, rarely up to 20 meters and sometimes close to wasp nests. They use vegetable fibers, moss, grasses, feathers and spider webs for their construction. They lay 2 or 3 white eggs, which only the female incubates for about 18 days. The chicks leave the nest on the 17th or 18th.

Usually found in pairs or family groups, rarely solitary. It flutters and jumps with its tail raised, pausing to look up at the dense foliage from the bushes to the treetops. It makes short and fast flights to the underside of the leaves. A frequent display is to move laterally along a perch with its tail raised while vibrating it on its back.

It is considered at Least concern.

Farieta, A. 2011. Dictionary of the scientific names of the birds of Colombia, Origin and use. El Bosque University.