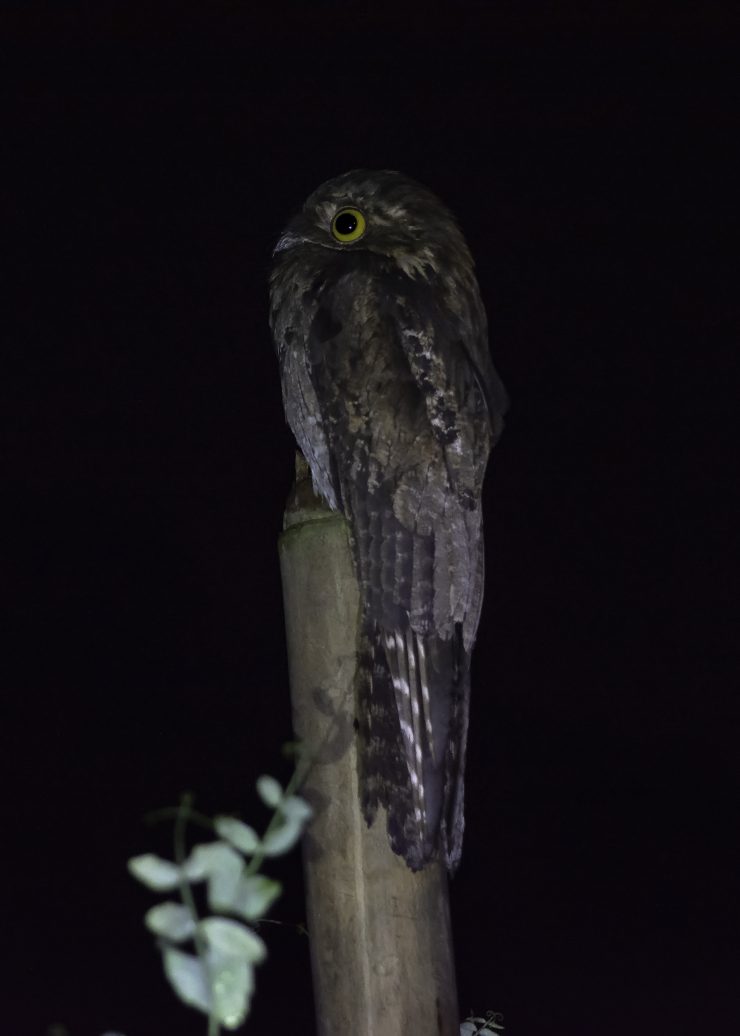 The common potoo, grey potoo, lesser potoo or poor-me-one(Nyctibius griseus), is a nocturnal bird which breeds in tropical Central andSouth America from Nicaragua to northern Argentina and northernUruguay. The northern potoo (N. jamaicensis) was formerly classified as asubspecies of this species.

This potoo is a large cypselomorph bird related to the nightjars andfrogmouths, but like other potoos it lacks the bristles around the mouth found in the true nightjars. It is 33–38 cm long and pale greyish to brown, finely patterned with black and buff, camouflaged to look like a log; this is a safety measure to help protect it from predators, but its mode of perch is also a camouflage. It has large orange eyes.

It is a resident breeder in open woodlands and savannah. It avoids coolermontane regions, rarely occurring over 1,900 meters ASL even in the hottest parts of its range. Also, arid regions are usually avoided; for example, in the dry Caribbean plain of Colombia the species was first recorded in April 1999. In gallery forest-type environment around the Uruguayan-Brazilian border, it is by no means uncommon. A bit further south, where the amount of wood- versus grassland is somewhat lower, it is decidedly rare, and due west, in theEntre Ríos Province of Argentina with its abundant riparian forest it is likewise not common. The birds at the southern end of their range may migrate short distances northwards in winter.

In lowlands, it can be easily confused with the Long-tailed Potoo (Nyctibius aethereus), but the latter is larger with a longer, graded tail and fewer caudal bars (7-9 vs 5-6).

Two subspecies N. g are recognized. panamensis and N. g. griseus whose differences are very subtle. The panamensis race is found in Colombia west of the Andes and the griseus race east of the Andes.

It feeds mainly on insects among which beetles, moths, mantises, ants, termites, cicadas and grasshoppers have been recorded.

In Colombia, evidence of reproduction has been recorded in April and May in northern Antioquia and in January in Valle del Cauca. It lays a white egg with purple or brown spots on a hollow formed by the knot of a tree. The incubation period is approximately 33 days and is carried out by the male during the day and by the female at night. Both parents take turns feeding and warming the baby overnight. The chick remains in the care of its parents for three more weeks after hatching and acquires all the plumage necessary to fly after another 40 or 50 days.

The single egg is white with lilac spots. It is laid directly in a depression in a tree limb, usually some meters above ground. It is not clear whether there can be, on occasion, two eggs in a clutch.

This nocturnal insectivore hunts from a perch like a shrike or flycatcher. During the day it perches upright on a tree stump, and is completely invisible, looking like part of the stump because it stays so completely still as it perches. If disturbed by larger animals, such as common marmosets (Callithrix jacchus), it may break its camouflage and try to chase them away however.

This widespread species is not considered threatened by the IUCN.