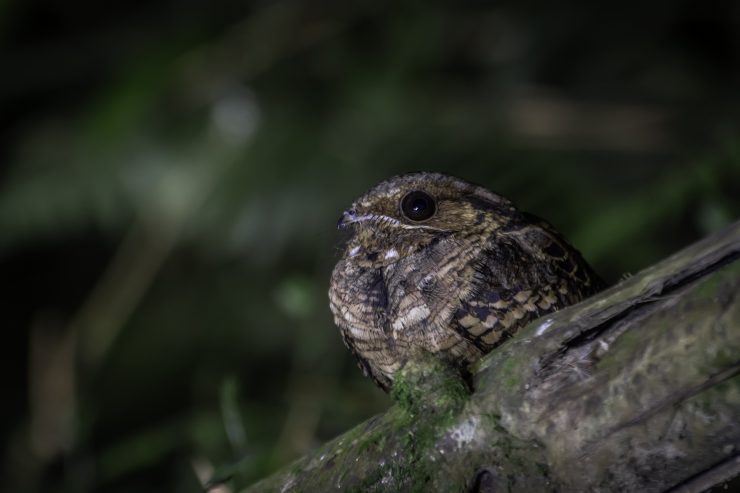 The Common Pauraque (Nyctidromus albicollis) in theFamily Caprimulgidae breeds in the subtropical and tropical of the New World, and except for northernmost birds it is largely resident all year round.

Description.This medium-sized nightjar is 8.7–11 in (22–28 cm) long and has two colour morphs, the plumage being variegated greyish-brown or rufous-brown. It is long-tailed and has broad rounded wings. The buff ‘eyering’ and ‘facial stripe’ contrast with the reddish sides of the face.

The adult male pauraque has a white band near the wing tips, and the outer tail feathers are mainly white. The female’s wing band is narrower and the white in the outer tail is more restricted. There are seven subspecies of the pauraque, differing in size and greyness.

The male pauraque’s song is very variable, but includes a whistled weeeow wheeooo («who-r-you»), soft puk puk and a whip given in the courtship flight as he flutters around the female. Her call is a rapid succession of whip sounds.

Its habitat is made up of tropical and subtropical forests, tropical mangroves, thickets, grasslands, and plantations, up to a height of 1600 m.a.s.l.

The two pinkish eggs of the pauraque are laid directly on the ground or leaf litter.

It is found in open woodland/grassland habitats, but also scrubland and crop fields. This species has long legs (by nightjar standards) with bare tarsi, and is more terrestrial than most of its relatives. If disturbed, it will sometimes run rather than fly, and it frequently rests on roads and tracks. In general, it prefers mixed habitat which offers densely vegetated hiding places – ideally forest – for the day, as well as open landscape – perhaps even rivers or wetlands – to hunt at night. The pauraque is nocturnal, like other nightjars, and starts to fly at dusk. Like its relatives, it feeds on insects caught in flight, usually by flycatching from a low perch, but also by foraging over open ground.

Mythology.There is a legend from the Uitoto indigenous community (from Peru and Colombia) that on moonlight nights a bird screams violently at the night star: Tuhuayo! Tuhuayo! They affirm that he is the son of the moon (a star considered masculine by many Amazonian communities) with the goddaughter of an old woman, and as he has been abandoned by the moon, he rebukes him saying, I am your fruit! In Quechua, Tuhuayo means fruit).