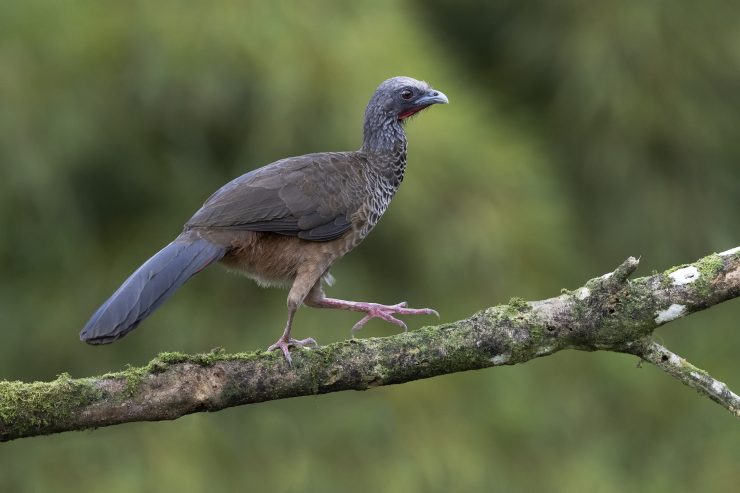 Its name comes from the Greek Ortalis which means hen and Columbian refers to Colombia, which is the country from which it is endemic.

Small guacharaca of 53 cm in length. It does not exhibit sexual dimorphism. It is characterized by presenting the front part of the neck and chest scaled in white. It has a small red tail, the head is grayish in color and the forehead is white, the body in general exhibits a grayish-brown color. The legs are pink and its long tail is brown.

It can be confused with the Variable Guacharaca (Ortalis guttata) in its general appearance, but it differs from it by presenting a white scaly neck and breast, while O. guttata has these parts speckled with white. O. columbiana also exhibits º lighter coloration on the head and belly.

It is an endemic species of Colombia and is distributed between 100 and 2500 meters above sea level. It is found west of the Andes in the foothills of Valle del Cauca and the Magdalena Valley.

Their diet consists mainly of fruits, having an important role in the dispersal of seeds.

They build the nest in the trees with branches and vegetation. The female lays about two eggs.

It is found most of the time in trees and is observed in pairs or small groups.

It was previously considered a subspecies of Ortalis guttata, but a recent SACC proposal treats O. columbiana as a separate species from O. guttata.

It is considered a species of least concern and according to Birdlife International it is classified as a low risk of extinction as it is a relatively abundant species. In some studies, high priority is recommended in terms of conservation and further investigation of its natural history, since it is an endemic species of Colombia.