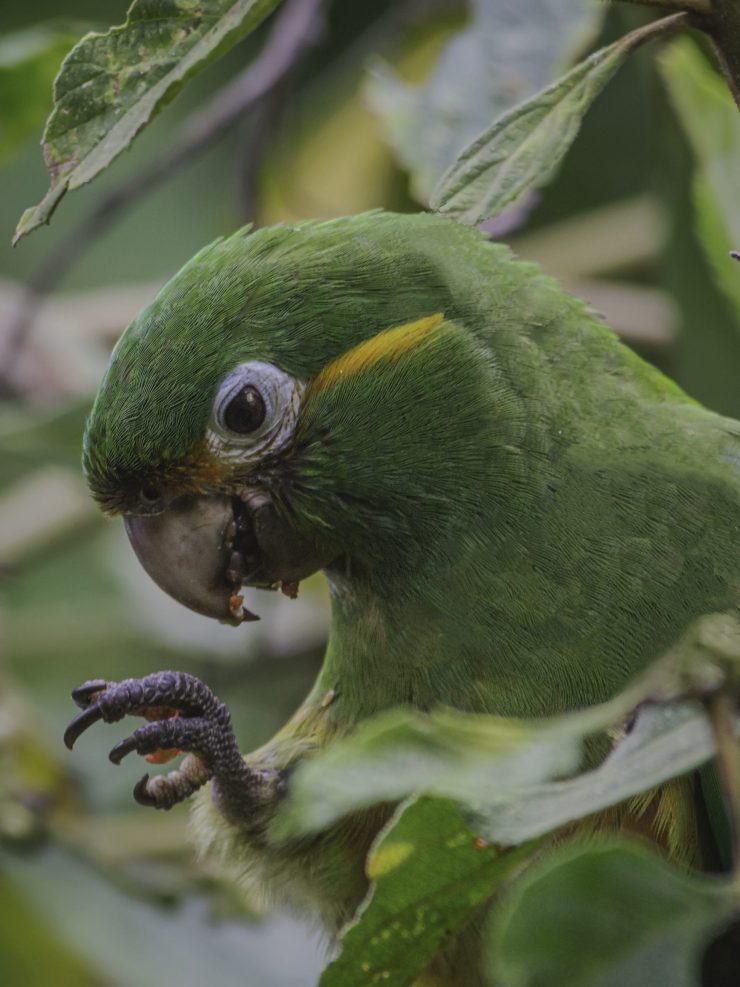 I heard them long before I could see them. Vocal and gregarious, a kaleidoscope of color bursting from exceedingly high trees. Unlike a songbird’s pleasing melody, a parrot’s squawk is at times irritating.

Along a deserted road in the Colombian Amazon, near the town of Puerto Inírida in the department of Vaupés, I manage to watch some 100 macaws devour seeds, flirt, and play tag. They swoop low from branch to branch. To my advantage, the trees have few leaves and offer an amazing view, a rare experience during my bird-watching time in this country.

Parrots are masters at camouflage. Their striking shades of green match their preferred environment. Seed and nut eaters, they spend the majority of time in trees, and on more than one occasion, I have watched a large number of them fly directly into a canopy and simply disappear.

Even parrots, with bright red or yellow markings, are difficult to see when they land on treetops and mingle with dead leaves or red berries that provide a backdrop of different colors. Parrots are also highly impatient and seem to never remain still.

Colombia is home to 54 species of parrots that include macaws, parakeets, and parrotlets. Contrary to popular belief that parrots reside solely in the Amazonian rainforests, these incredible birds are found in regions across Colombia and even large cities.

They thrive on the coast and forest lowlands, and their habitats are diverse — they are found anywhere from sea level in the jungle to as high as 3,000 metres in the Andes. Five parrots are endemic to Colombia, and another two species are being investigated to confirm whether they are native.

A geographic location near the Equator ensures ideal weather and provides reliable, year-round supply of food for our green-feathered friends. With a preference to nest in vacant tree holes and hide from predators, birds have developed a close relationship with the forest. So Colombia’s biodiversity and vast swaths of forest provide a perfect habitat. But habitats are under siege from oil and gas exploration, illegal gold mining, logging, and industrial agricultural expansion.

Several of this country’s finest and rarest species are now threatened with extinction. This blight has caught the attention of international conservation organizations that partner with the ProAves foundation, a Colombian nonprofit headquartered in Bogotá. The primary aim of Fundación ProAves is to protect endangered birds and their habitats across Colombia.

With public donations funding a full-time staff, the conservation programs have resulted in the creation of the largest private reserve system in Colombia, protecting 68% of all threatened birds, including a parrot corridor located in the Central Cordillera of the Andes that covers 7,500 hectares. This continuous string of reserves protects four endangered parrot species plus the habitat for various plants, endangered frogs, spectacled bears, and mountain tapirs.

One of these reserves, El Mirador in the Quindio department, seeks to protect the Indigo-winged parrot (Hapalopsittaca fuertesi). Since it is one of the rarest birds on the planet — spotted only in Colombia — and does not migrate, it depends on the regional mistletoe berry.

With no known sightings for almost a century after its only Andean habitat was logged and cut down in 1911, the Indigo-winged parrot was once thought extinct. But in 2002, ProAves biologists found about a dozen birds and immediately began to secure land and build nest boxes.

Major progress came in 2009, when a joint effort with the American Bird Conservancy and other organizations enabled the purchase of additional land near El Mirador to become the Giles-Fuertesi Nature Reserve. Today, the population of the species is estimated at 250.

The Yellow-eared parrot is also endemic to Colombia. And it is also critically endangered because if its relation- ship to the palma de cera wax palm, Colombia’s national tree — which is itself in danger of extinction.

Partnering with the American Bird Conservancy and the Loro Parque Foundation, the Yellow-eared Parrot Reserve (Reserve Natural de las Aves Loro Orejiamarillo) was established in 2006. An artificial nest program and wax palm nurseries have contributed to the yellow-eared parrot’s population increasing to over 1,000. Located in the village of Ventanas in Antioquia, the reserve offers a lodge for parrot watchers.

This corridor protects the endangered golden-plumed parakeet (Leptosittaca branickii) that lives in a tiny area of humid neo-tropical forest on the southeastern slopes of the central Andes. The rusty-faced parrot has been seen near the Otún Quimbaya nature sanctuary, located near Salento in Quindío. As the capital of this department expands, the parakeet’s survival remains precarious.

Sightings of the vulnerable and endemic rufous-fronted parakeet have been recorded at the Los Nevados National Park, but the birds are usually above your head in fast-flying flocks. I was fortunate to see the near-threatened brown-breasted parakeet in the Guasca wetlands an hour from Bogotá; and just a lucky few have seen the spot-winged parrotlet (Touit stictopterus) soaring over the forest canopy in the southeastern Andes.

Colombia has a parrot paradise at their fingertips. For a tour of a reserve or to participate in the Amigos de las Aves program, contact Fundación ProAves in Bogotá.