COLOMBIA AS A DESTINATION TO WATCH BIRDS 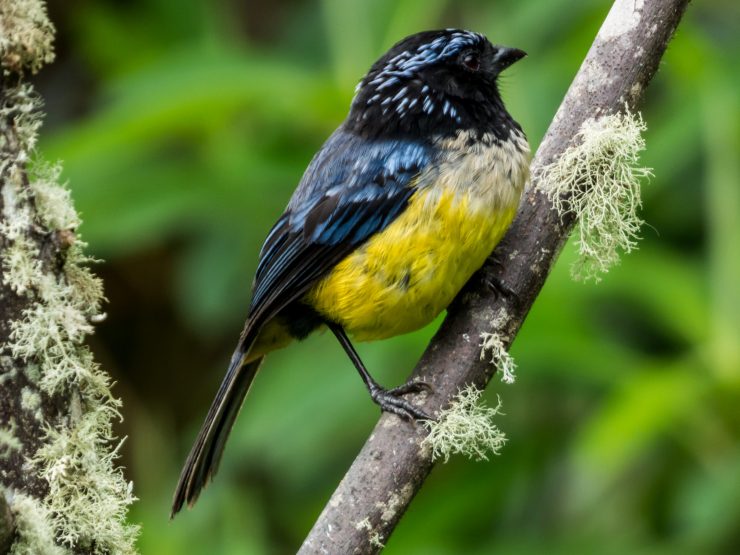 The North American John Myers is behind the strategy to position Colombia as one of the most important bird watching destinations on the planet.

In the Colombian circuit of bird-watchers –those men and women who are passionate about birdwatching– recognize that John Edward Myers (Minnesota, 1975) is a visionary who managed to put Colombia on the map of world birding tourism, and a kind of “conscience national” that made us realize the enormous wealth that the country has in terms of birds.

Not that we didn’t know. Not that it didn’t matter, but even that was taken away from us by the war: immersed for more than fifty years in a permanent bloodbath, talking about birds seemed, at least, banal. Colombia has more of these species than any other country on the planet, which makes it unique and, if we get metaphysical, even miraculous. It was a proven scientific fact, but a niche one. A surprising and revealing truth that, however, did not reach the general public. Today it is clear that the country has some 2,000 species of birds, which represents more than 20% of the global total; 79 are endemic, 193 almost endemic and 139 threatened or at risk of extinction, according to official figures. If we talk about hummingbirds, for example, there are 150 of the almost 350 species that inhabit the planet here. Only when the conflict began to wane and the possibility of a peace that now looms distant and elusive began to consolidate, did birds become a factor of economic and social hope. And there, right at the juncture that marked the peace agreement with the FARC, John Myers, political scientist, conservationist, specialist in Hispanic American Literature and expert in international environmental policy, enters the scene.

The winds of peace made that formerly forbidden territories, kidnapped by the armed actors, could be opened to tourism and its more ecological aspect. In 2015, 3.2 million foreign tourists arrived; 3.5 in 2016; 3.9 in 2017 and 4.3 in 2018, according to the Ministry of Commerce, Industry and Tourism. The boom had started. A new gold shone in these lands.

In parallel, John Myers was beginning to open the way to position Colombia in the world bird watching circuit. The first thing he did was design a route –the Northern Colombia Birding Trail–, a pioneer in the country and in operation since 2016, which allows, in eleven days of travel, and especially foreign visitors, to observe up to 900 species of birds in sites as amazing as Tayrona Park, La Guajira, the Sierra Nevada de Santa Marta or the Perijá mountain range.

With the economic and logistical support of USAID (United States Agency for Development), Calidris (Association for the Study and Conservation of Birds in Colombia), the National Audubon Society (American organization that protects birds and their habitats) and National Parks of Colombia trained about 45 local people and promoted the idea of ​​tourism based on conservation.

“John arrived at a very important juncture. The country had been closed to tourism and it was he who got many birders into this business. He is a person who involves very much with the communities because he knows how to reach people «, assures Fernando Castillo, director of Calidris.» His merit was to dare to convince Audubon to create this first route, the Northern Colombia Birding Trail. And he was also able to convince the National Government to keep an eye on this matter, so that other routes would be replicated from the pilot experience,” adds Gabriel Utria, a biologist with more than ten years of experience in Birding. Those who know Myers speak of him as a guy with excellent connections at all levels (for something he organized a forum on the private island of magnate Richard Branson): «Innovative, charismatic, inspiring, with a great capacity to understand Colombia and a ‘diplomatic bird watcher'» are some of the descriptions made by people close to him. As an Audubon executive (he was director of the Latin American program), Myers not only designed the first bird watching route in Colombia, but he was also the co-author of a study, today a reference, which showed the results of a survey of Audubon birders and made projections that heralded a promising future for ecotourism and bird watching.

The report, published in 2016, is entitled Peace is much more than doves: the economic benefits of the Peace Agreement in Colombia from birdwatching tourism, and concludes, among other things, that at that time, more than 300,000 Bird-watching Americans were willing to visit the country, paying more than $ 300 per person per day, which would translate into about 7,500 jobs and an income of $ 46 million annually. birds

Even the prestigious magazine The Economist echoed the report and several international media published the story of the Colombian miracle and the possibilities that were opening up. Many of the birders who trained on the Northern Colombia Birding Trail became small businessmen, and even some who had flirted with guns exchanged violence for the hope of decent work.

The problem, now, is that the situation of public order threatens to ruin all the ground that had been won. “We are not only facing the pandemic, but the increase in violence. We are concerned about the damage that is being done”, says Carlos Mario Wagner, director of the international fair Colombia Birdfair, based in Cali.

We talked to John Myers about that one morning in September. Of the pessimism that seizes him at times and the uneasiness produced by seeing that avitourism would suddenly disappear if the war returned.

“I am less optimistic, yes, but I am not going to stop fighting. Tourism is the new gold, but they are not doing much to make it that way, that’s why I keep screwing around, because this ground gained cannot be lost,” he says.

The heart in Colombia

Vereda El Líbano (La Calera, Cundinamarca). John Myers welcomes me in the company of a friend – the owner of the house he lives in these days – and three large dogs: Elvis Presley, a Rottweiler; Jim Morrison, a Belgian Shepherd, and Donna Summer, a Dutch Shepherd. With Jim Morrison, John trains to participate in mountain races, one of his hobbies. We walk for fifteen minutes along a path that reveals, in the background, some traces of the Chingaza Natural Park and some buildings that contrast with the rural atmosphere of the area. They are like buildings in the 93 park in Bogotá, in the middle of the countryside.

Myers speaks such impeccable Spanish that he even uses weird-sounding colloquial words in his Minnesota accent: patch, Chinese, manes, jeta. If Colombianness (does that exist?) Could be measured in a ranking, one could assure, without fear of being wrong, that this man with the typical stamp that feeds the foreign cliché (1.88 meters, blond, green-blue eyes) it would be at the top. «He has his heart in Colombia», a source will tell me.

The idyll with this country began, perhaps, in the early years of his childhood. Over there, in some labyrinth of his unconscious, the memory of the stories that his Colombian nannies told him and the interest that Linda, his mother, instilled in foreigners and their countries of origin.

He learned the Spanish language from elementary school, although he only learned, he says, “obscenities”. Later he perfected it in Spain, where he lived for a year, and in Latin America, which he has traveled in his capacity as executive of non-governmental organizations dedicated to nature conservation.

His first visit to Colombia occurred in 2001. During a four-year tour of Bolivia as a member of the famous US organization Peace Corps, Myers discovered a bird guide from Colombia who blew his mind. He wanted to come. They told him not to. He toured Cartagena and Bogotá and on the last day, in the capital, he ended up in a place left, full of dust and oblivion that at that time was the Natural Parks eco shop, and he supplied himself as much as he could with everything that would serve him. get an idea of ​​the country’s natural parks.

He returned a year or two later. He lived in Santa Marta, took courses at the National University and in the Andes. He met Martha Hernández, director of Tayrona Park, and learned of her murder, at the hands of the paramilitaries, several months later. He returned to the United States, worked in Washington in one of the largest nature conservation NGOs, and never stopped targeting Colombia. The dream came true when he signed him up for Audubon. In 2017, after almost fifty visits to the country in a relatively short period of time, he settled in Colombia.

Here he dances champeta, has traveled through almost the entire national territory and is one of the most enthusiastic defenders of peace. “Without peace there is no birdwatching. I think it is time to fight more than ever. Many aspects are improving, but it is a very difficult time for the future of the country. My impression is that Colombians and the international community must be convinced to continue betting on peace,” he says.

He is no longer formally linked to any Non-Governmental Organization, but he continues to do consultancies related to nature, he is preparing to create a binational birdwatching route between Mexico and the United States and begins a new facet as a professor at the de Los Andes University on environmental issues and as a writer. “I want to write stories, chronicles, books. And not just talking about birds, but about peace, because that, for me, is always the most important thing, «he concludes.