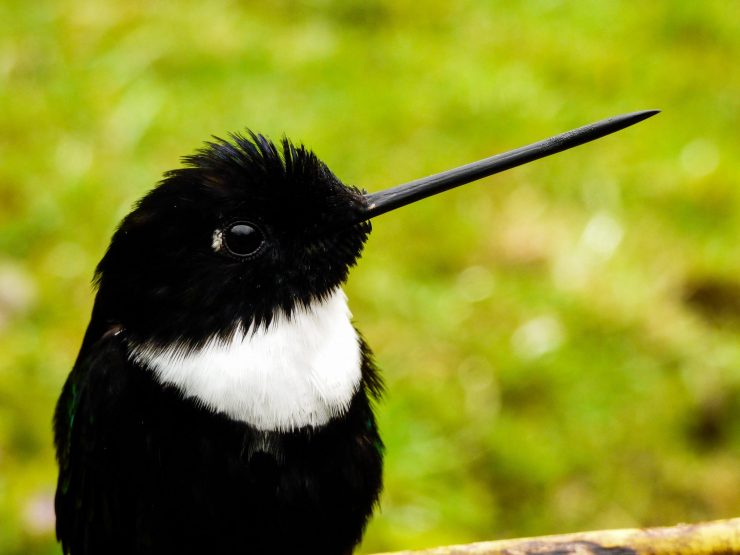 The collared inca (Coeligena torquata) is a species of hummingbird found in humid Andean forests from western Venezuela, through Colombia and Ecuador, to Peru and Bolivia. It is very distinctive and unique in having a white chest-patch and white on the tail. Like other hummingbirds it takes energy from flower nectar (especially from bromelias), while the plant benefits from the symbiotic relationship by being pollinated. Its protein source is small arthropods such as insects. It is normally solitary and can be found at varying heights above the ground, often in the open.

The Gould’s inca (Coeligena torquata omissa) of southern Peru and Bolivia is normally considered a subspecies of the collared inca, although it has a rufous (not white) chest-patch.

Collared incas found in different parts of their range tend to have certainmorphological features characteristic of that region, and are considered separate subspecies. From north to south along the Andes they are:

10–14 centimeters (3.9–5.5 in) in length, with a rather long (3–3.5 centimeters), straight, black beak. Under most lighting conditions Coeligena torquata torquata appears black except for a very large and distinctive white chest-patch. However, in ideal lighting other features can be discerned: a shimmering metallic violet forehead patch in males, white thighs, fleshy-dusky feet, shimmering green throat in males, dull and containing some white in females, and some dark green mixed in with the black of the body. The tail of both genders is black except for white on the basal half of the outer four rectrices, and part of the underside. The female is slightly lighter green overall than the male and has a slightly smaller chest-patch

Humid subtropical and temperate forests, including cloud forests on both slopes of the Andes from Venezuela to Bolivia between 1,800 meters and 3,000 meters, usually above 2,100 meters in Ecuador. It typically forages below half the height of the canopy, and can most often be found around thickets near the forest edge.

It is fairly common throughout most of its range. No reasons for concern have been claimed.

Like other hummingbirds, the Collared Inca obtains most of its energy from nectar, which it drinks while it in turn pollinates the flower, and feeds on insects and other small insect-like arthropods as a source of protein. It seems to prefer epiphytes. It is a solitary trap-liner, meaning that it forages alone by flying a routine route between several flowers.

Two single females of other Coeligena species have been observed caring for two offspring each. The nests were 1–2 meters above ground, about 7 centimeters (2.8 in) tall and wide, with an interior cup about 3 centimeters (1.2 in) deep and wide, and were composed of seed down and other materials. The eggs were completely white and measured about 1.5x1cm. The mother visited once or twice every hour, to feed the young for a period of 9–55 s.