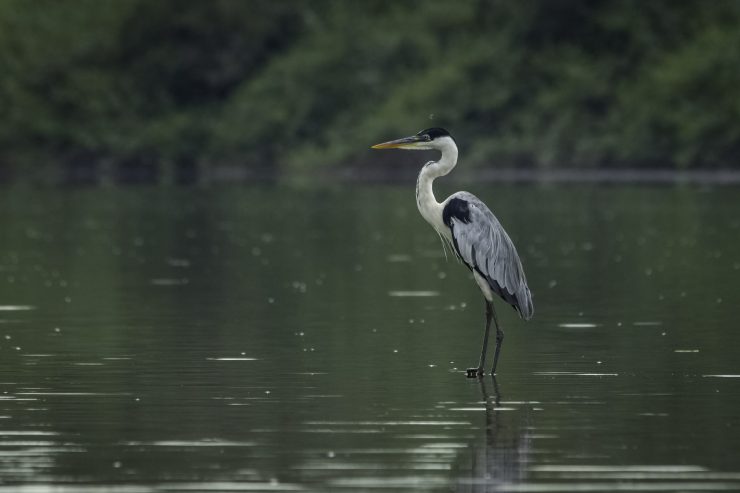 The cocoi heron (Ardea cocoi) is a species of heron in the family Ardeidae. It is common and widespread throughout most of South America including Argentina, Bolivia, Brazil, Chile, Colombia, Ecuador, French Guiana, Guyana, Panama, Paraguay, Peru, Suriname, Uruguay, and Venezuela. It is a non-breeding visitor to Trinidad and Tobago and a vagrant to the Falkland Islands and Tristan da Cunha. Its natural habitats are rivers, swamps, and freshwater lakes.

It is the largest and slender heron of all the herons in Colombia. Its name Ardea derives from Latin and means heron, while cocoi is a term derived from Socó, a Tupí name which in turn means jumping bird. It can measure 95–127 cm (37–50 in) in length, stand up to 100–130 cm (39–51 in) in height and weigh 1.14–3.2 kg (2.5–7.1 lb). Its markings are not dissimilar to a grey heron’s, but it is darker with a longer neck and crest. It has a bright orange beak and dull orange legs, and whilst perched holds its neck in an S shape characteristic of all herons. In flight, it is slow and graceful but appears scrawny due to its neck and large wings. The cocoi heron is extremely similar to its North American and European counterparts, the great blue heron and grey heron, with which the cocoi heron forms a superspecies.

It can be confused with the Great Blue Heron (Ardea herodias), but it is whiter on the body and the black area on the head is much more extensive.

It is distributed in most of South America, from eastern Panama to Chile and Argentina. It is found throughout Colombia up to 1500 m above sea level.

It lives mainly in humid areas such as: mangroves, estuaries, lakes, swamps, lagoons, rivers and swamps.

It feeds on fish, frogs, and aquatic insects. On the coast of Brazil it has been observed eating dead animals. When it moves away from bodies of water and goes to dry places, it can feed on mice.

It has been reported in the reproductive period in July in Suriname, between August and November in southeastern Brazil and Argentina, and in August in Colombia. It nests in large colonies, its nests are generally built on dry trees with sticks and small branches which are covered with herbs. They lay 2 to 4 blue-green eggs that incubate for 24 to 26 days.

A solitary and surly heron that fishes without moving from the position it takes, although it is sometimes seen wading in shallow waters. It is characterized by having an elegant flight with a wide and leisurely flap

Form a superspecies with Ardea cinerea and Ardea herodias.