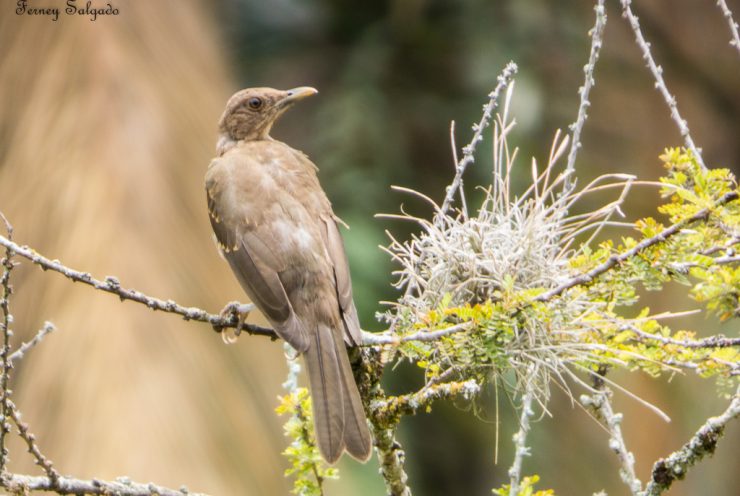 The clay-colored thrush (Turdus grayi) is a common Middle American bird of the thrush family (Turdidae). It is the national birdof Costa Rica, where it is well known as the yigüirro (Spanish: [ʝi’ɣwiro]). Other common names include clay-colored robin.

In general appearance and habits it resembles other Turdus thrushes such as the American robin. It is about the same length or slightly smaller: 23–27 cm (9.1–10.6 in), and weighs 74–76 g (2.6–2.7 oz) on average. The plumage is brownish, somewhat lighter below than above, lightest on the flanks. Birds from humid regions are darker than those from dry regions. The throat is faintly streaked. Immature birds have faint mottling on the back and underparts. The bill is greenish-yellow with a dark base, the legs are pinkish or flesh-colored, and the irises are reddish—all useful identification points.

It is similar to the White-winged Mirla (Turdus leucomelas) but it has a gray head in contrast to its olive brown upperparts. The Black-headed Mirla (Turdus olivater) is very similar but this one is darker, with a blackish bill (not yellowish green) and is mainly from highlands.

In the past it has been thought that it could form a superspecies, or even be conspecific with T. nudigenis, but the differences between the two are considered too great to justify this treatment.

Its status is of least concern; it is also known as the water whip, orchard or spring blackbird.

It ranges from South Texas (where it is rapidly expanding its range) to northern Colombia; west and north of the Isthmus of Tehuantepec. It is limited to the Atlantic slope, except for a population around Oaxaca City, Mexico that probably originates from escaped cage birds.

In much of its range it is familiar in yards and gardens, similar to some other thrushes such as the American robin, the Eurasian blackbird, and the song thrush. In 1977, the Costa Ricans chose the yigüirro as a national symbol (over many much more colorful birds that inhabit the country) due to its strong and melodious song that always comes during the start of the rainy season. In addition, unlike many of the forest songsters of Costa Rica, the present bird has been familiar to the general population since the country’s early history, thanks to the species’ tendency to live near houses and settlements.

The clay-colored thrush usually forages for fruit or invertebrates on the ground or near it, singly or in pairs, but flocks may feed high in fruiting trees. It will follow army ants to feed on small prey disturbed by the ant columns.

It builds a heavy cup nest of grass, moss, feathers, leaves and mud on a firm support above the ground, which may include human constructions such as windowsills. It lays 2 to 4 pale blue eggs with red-brown and gray markings between March and July and may double-brood.

It is aggressive in defense of its nest, having been known to mob raptors as large as golden eagles, but is not otherwise particularly territorial. Aggressive defense against brood parasites may explain why it has not evolved complete recognition of brood parasite eggs; it is one of only very few species of birds that are partial ejectors, with only about 25% of individuals ejecting parasitic eggs of the bronzed cowbird.

The song, rather low-pitched and with a slow steady tempo, consists of many slurred musical phrases which are often repeated irregularly. The tock flight call is like the American robin’s but harsher.

The internet bird collection (2013). Downloaded from http://ibc.lynxeds.com/species/white-bearded-manakin-manacus-manacus on 05/31/2013.