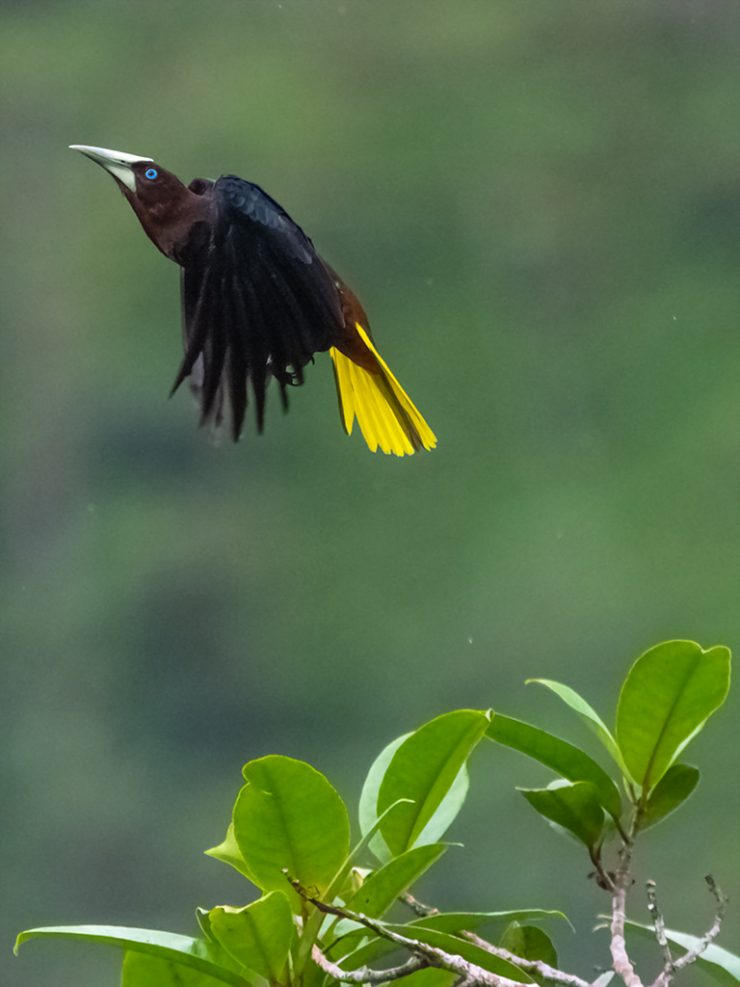 This large dark bird builds its nest in conspicuous colonies-one can spot the chosen trees full of long, narrow sack nests from far away, as well as hear the loud, resonant kuk call from the vocal oropendolas. This oropendola can be identified by its mostly black body followed by a bright yellow tail, with a chestnut-colored head, pale blue eyes, and long ivory bill that starts high up on the forehead. Adults of both sexes are colored similarly, while juveniles are duller and take 2 years to develop complete adult plumage. This bird can be distinguished from the Montezuma Oropendola, which has a chestnut body and dark bill. The Chestnut-headed also uses calls that are deeper and more resonant than those of the Montezuma.

Habitat
The Chestnut-headed Oropendola prefers the canopy and edges in humid, forested regions.

Biology
The oropendola’s characteristic colonies of 12 to 50 long (56 cm) sacklike nests hang from the ends of branches of large trees that are prominent in a clearing or forest edge. The females weave these nests of fibers, vines, Spanish moss, and other materials. They also incubate and raise the two young without the help of adult males. During the nonbreeding season (June-December), flocks of these birds travel, searching for fruiting trees; their colonies often stay together, and return to their nesting trees when the breeding season resumes. Within a colony there is a sex ratio of 5 females for every male, indicating that their mating system is polygamous. The males do not fight, though, and show no sort of dominance hierarchy in the colony.

The dramatic disparity in numbers of each sex is due to the energy costs of raising males: females have to spend twice as much energy to raise male chicks, and males fledge when they are twice the weight of females; so when food is scarce, more male chicks die. In addition to this difficulty, Chestnut-headed Oropendolas lose their chicks to predators like toucans, snakes, opossums, and bats, but the most severe damage comes from botfly larvae.

Diet
The agile Chestnut-headed Oropendola mostly forages in the canopy, as it hops, runs, and hangs on branches, looking for fruit or the nectar of large flowers like those found on the balsa tree; they may also descend to look for small frogs and lizards.