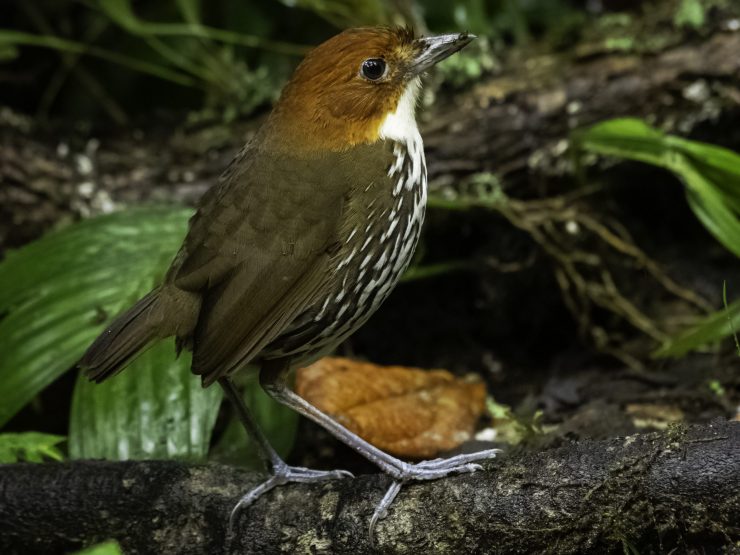 It is distributed by the seaside mountains of northern Venezuela, and, along the Andes, from northwestern Venezuela, through Colombia, Ecuador, to northern Peru.

It is widely diffused and common on or near the ground, in its natural habitat of humid tropical or subtropical mountain forests, and its edges, mainly between 1900 and 3100 meters above sea level. It is not threatened.

It is a medium-sized tororoí, with an average length of 18.5 cm. Its head and nape are reddish orange. The back is olive brown and the throat is white. The belly is white superimposed with brown or black stripes, especially on the sides and flanks. The legs are blue-gray. This combination of markings makes this species quite distinctive and easy to identify.

Although shy and reserved like all members of its genus, to some extent this species is reasonably frequently exposed, though rarely far from cover.

For a long time it was considered conspecific with Grallaria watkinsi, but they are distinguished by differences in voice, plumage, the colors of the bare parts and habitats; Also, no intermediate specimens or songs are known from the overlapping area of ​​the species in southwestern Ecuador. The subspecific affiliation of the birds of Cerro Chinguela, in northern Peru, is uncertain and they are tentatively included in the nominal subspecies.

According to the classification of the International Ornithological Congress (IOC) (Version 6.3, 2016) and Clements Checklist v.2015, 7 subspecies are recognized, with their corresponding geographical distribution:

Set the leaves aside with your beak. Dig and poke beak into soft mud looking for worms, large insects, other invertebrates, and frogs.

Its nest consists of a mass of dead leaves, roots and moss at a certain height above the ground, the female lays 2 eggs which she incubates.

This bird is mainly land, jumping on the ground or running quickly, usually hiding in tangled undergrowth but can come out into small clearings and roadsides early in the morning or at dusk.