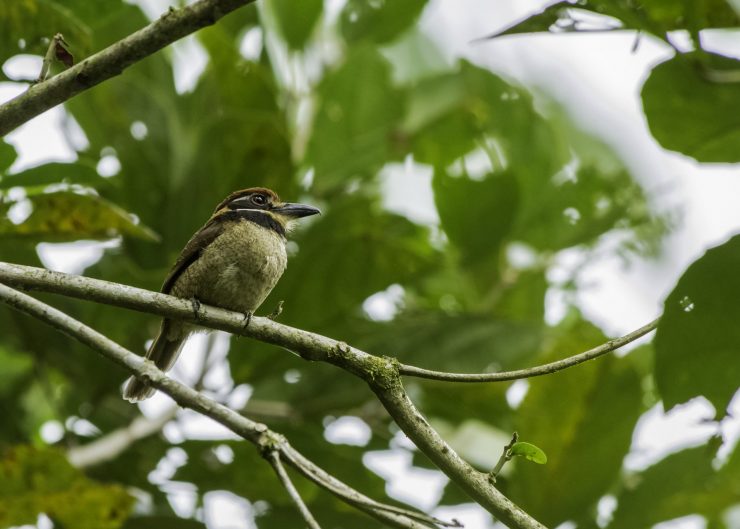 Silent and inconspicuous bird that lives in humid jungles east of the Andes. His name Bucco derives from Latin and means cheek. The epithet macrodactylus means long-fingered and derives from the roots makros = long and daktulos = finger.

It is a small, roundish dark brown bird with a short narrow tail and a dull whitish breast. It is a bright multicolored bird, named for its cap, which is a deep chestnut. A medium orange, narrow collar on the upper back borders the chestnut cap and ends at the side of the neck in a spot. A second collar, similar to that of the collared puffbird, is on the upper breast, wider on the sides, narrow under the throat, and deep black. The black collar is parallel to a second deep black stripe, an eye-stripe across the lower eye from the side to the bill. The deep chestnut cap and two black stripes enclose two parallel bright white stripes. The bill is stout, short and medium black, with a decurved tip. The bird has black eyes, black legs, and also short light-buff whiskered-feathers surrounding the base of its bill (moustachial). These bright head colors contrast with a duller colored body and breast.

It could be confused with the Spotted Puffbird (Bucco tamatia) which has an orange rufous throat and low underparts with thick, stippled bars.

Formerly classified in the monotypic genus Argicus. The populations of the Caura River in southern Venezuela have sometimes been classified as race caurensis but such a proposal has not been accepted since they are indistinguishable from other populations.

It is found in northwestern South America in the western Amazon Basin of Brazil, in Amazonian Venezuela, Colombia, Ecuador, Peru, northern Bolivia, and in the eastern Orinoco River Basin of Venezuela. Its natural habitats are subtropical and tropical moist lowland forests and subtropical or tropical swamps.

The chestnut-capped puffbird is found in the western Amazon Basin, and in the north in Venezuela, the upper and eastern reaches of the Orinoco River Basin and eastwards into Brazil’s Roraima state, in the west. It is not found east of Roraima’s south-flowing Branco River.

On the Amazon River its range starts upstream of the Madeira River confluence, but the entire Madeira is its eastern limit in the Basin’s southwest quadrant, extending upstream into its tributaries in northern Bolivia. Likewise it is at the confluence of the Amazon River and the Rio Negro, but its range skips 400 kilometres (250 mi) to above the Branco River–Rio Negro confluence. This contiguous range in the northeast goes northwards into southern-central Venezuela bordering Roraima state in Brazil, then southwards through Amazonian southeast Colombia, eastern Ecuador, eastern Peru, and extreme northern Bolivia.

There is little information about it. It has been observed feeding on moths and a cockroach was found in a stomach contents.

It nests in arboreal termite mounds in which it digs a hole. Other aspects of their reproductive biology have not been documented.

It is a rare bird that forages from the sub-canopy to the understory. Solitary individuals are generally found on exposed or partially hidden perches near water or in humid areas. It remains immobile for long periods of time and when hunting it does so by flights from a perch towards the foliage.