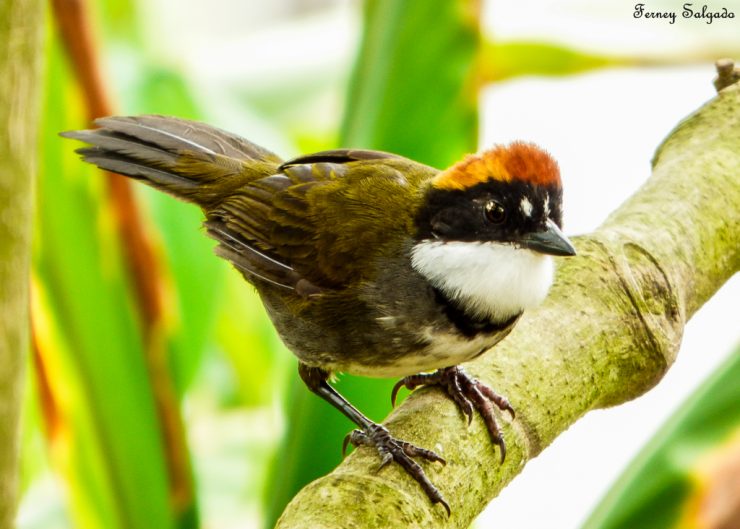 This species is generally common in the undergrowth of humid and very humid forest. Its name Arremon derives from the Greek root arrhemon = silent and its epithet brunneinucha derives from the Latin brunneus = brown and nucha = nape.

It is 16.3 to 19.5 cm lenght and weighs 32 to 47 g. It has a black mask that extends from the forehead, crown and mouths to the sides of the neck. It has two white spots in the supraloreal region with the rest of the crown and nape of brown color turning reddish yellowish on the sides of the latter. Its throat is white bordered in the lower part by a narrow black pectoral band. Its upper parts are olive green with darker wings and tail. The irises of their eyes are reddish brown, the bill is black and the legs are blackish brown.

Nine subspecies are recognized, of which only race A. b. frontalis is found in Colombia that is characterized by having the longest and thickest beak.

This species is distributed from Mexico to northwestern Venezuela and southern Ecuador. In Colombia it has been recorded from 800 to 3000 m of height above sea level and is found in the Serranía del Baudo, Serranía de la Macarena and in the Andes.

It inhabits a great variety of habitats throughout its entire range, including oak forests (Quercus) mixed with pine trees, also in understory of tropical forests and in subtropical forests with an abundance of epiphytes. In Colombia it lives in thick undergrowths of humid and very humid forests.

It feeds on a wide variety of insects and seeds.

Hatchlings and nests have been recorded in March and August. Its nest is an open and voluminous cup built with twigs and dry leaves and lined with roots and horse hair, which is located 2 meters above the ground in a shrub or in a small and dense tree. It lays 1 or 2 white eggs, which are incubated by the female for 14 days. Young leave nest around day 13 after hatching.

Stay alone or in pairs. Forages near or on the ground where it turns dry leaves in search of prey. Sometimes it is observed following legionary ants.

It is considered as a least concern.