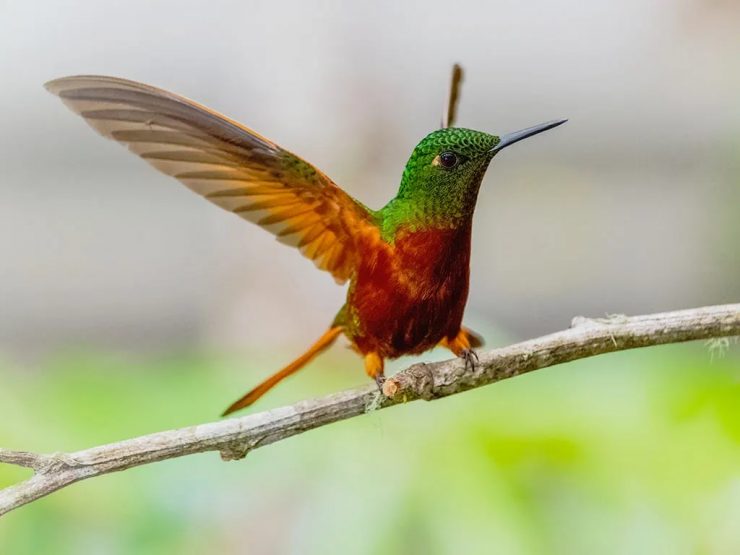 It has a length of approximately 11.4 cm. It has a moderately short bill of 18 mm, straight and rather thick. The male has the head and ruff in an iridescent green color, the rest is green above and brown below. It has the central rectrices in a coppery green hue. The rest is brown with green apex and margin. The female is similar, but has a green throat, more or less stained with cinnamon buff.

The brown color on the tail and most of the underparts is diagnostic of similarity to the female Long-tailed Sylph. The Fawn-breasted Brilliant may overlap its area, but this has a cinnamon color underneath instead of brown and has a green tail and the gorget is iridescent topaz pink, not green.

It lives in the humid forests of the foothills of the Andes mountain range, in Colombia, Ecuador and Peru.

It is found on the eastern slope of the Andes, in the extreme south in Putumayo and east of Nariño. Mainly in southern Colombia, eastern Ecuador (1600-2200 m) and eastern Peru.

Its behavior is very similar to that of Buff-tailed Coronet. It is a remarkably aggressive hummingbird. Several of them can be congregated in flowered trees.

It is considered Least Concern.