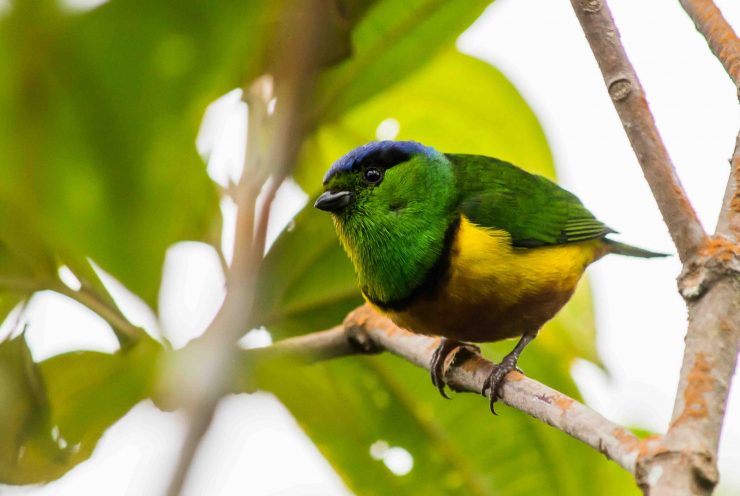 It measures about 12 cm and weighs 16 to 18 g. It is a bird with a short tail and beak. It has dark brown irises, dark gray legs and a blackish bill with a pale gray base of the lower jaw. The male has a green forehead base with purplish blue crown and nape, narrowly edged with dark red on the forehead and sides. It also has a narrow pale blue nuchal band, loreal and ocular area, sides of the head and neck, chest and throat emerald green. Its mantle, back and upper wing coverts are bright green, it has a bright yellow rump, primary coverts, and blackish flight feathers edged with bright green. The green of the chest is bordered in its lower part by a narrow black line tinged with chestnut. Their underparts are bright yellow with a brownish median streak that extends from the lower breast to the belly and the undertail-coverts (in some males it covers almost all of the sides and flanks). The female is slightly paler than the male and mainly green, with a turquoise blue crown and nape, and a narrow brown line bordering the front and sides of the crown. She has a dull yellowish chest and belly. The immature is mainly dull green with yellowish breast and belly.

It is distributed throughout the Andes from western Venezuela to Peru, where it is also found in some locations in the Amazon region. In Colombia it is found from 1400 to 2700 m above sea level (once at 3600 m) on both slopes of the Western mountain range in the departments of Antioquia, Valle del Cauca, Cauca and Nariño. In the Central mountain range it is found from Antioquia to the north of Tolima and from the Colombian massif towards the eastern slope of the eastern Andes to the limits with Ecuador. It is also found in the Serranía de Perijá where it has been recorded up to 3300 m and in the north of the Eastern mountain range in the southeast of the department of Norte de Santander.

It feeds mainly on berry-like fruits such as those of some species of the Loranthaceae and Ericaceae families and figs of species of the Ficus genus (Moraceae). Occasionally it also feeds on insects.

In Colombia, males in reproductive condition have been registered in the months of February and April in the Western mountain range and males in reproductive and immature condition in the month of May in the Serranía de Perijá. In Venezuela the construction of a nest was recorded in the month of March. Both members of the pair were observed carrying material to a dome-shaped nest with a side entrance, which was being built with tendrils, fibers, grass and moss at a height of 6 m on a roadside slope.

It generally stays in pairs and less frequently in family groups. It forages in the canopy, where it spends long periods of time moving very little among clusters of epiphytes. Occasionally seen along with other birds on fruit trees and foraging for insects on branches, epiphytes, and moss.

Species of the genus have occasionally been included in the genus Euphonia.