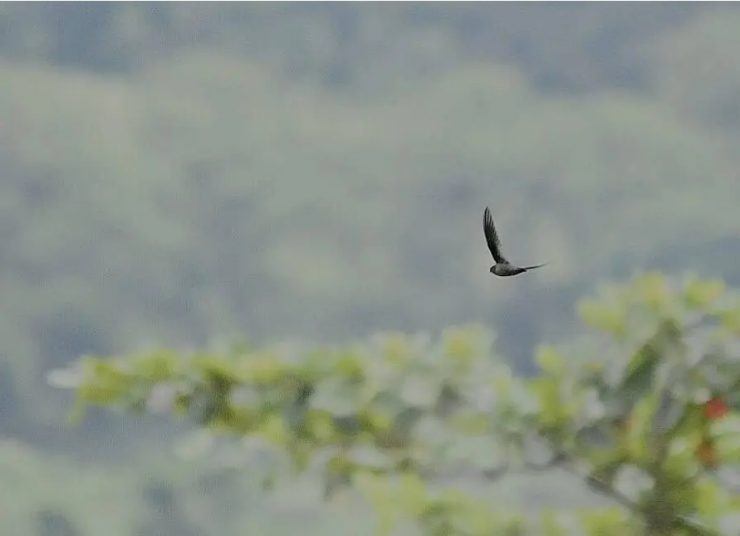 It is 13 to 14 cm on lenght and weighs 21 to 28 g. Its tail is short and square with the rachis of the feathers extending 6mm beyond the margin. It is a remarkably blackish bird with only contrast in the region from the lower back to the upper caudal coverts, which are paler and greyish. Their head and coat are a lustrous blue hue and their underparts are uniform dark brown. The young can be distinguished because they have full plumage and in good condition when the adults are molting or with worn plumage.

Very similar to the Amazon Swift (Chaetura viridipennis) which has longer wings and tail and an iridescent green crown and mantle, not iridescent blue. The Chimney Swift (Chaetura pelagic) is paler overall, with contrasting pale throat and sooty brown coat.

This species is found from central Panama and Colombia to Venezuela, Trinidad, the Guianas, and northeastern Brazil. Its area of ​​distribution in the country is unclear but it is probably found in the northern lowlands in the Caribbean region, the middle and lower valleys of the Magdalena River and in the Pacific lowlands and the Western mountain range from the Valle del Cauca to the limits with Panama.

In Trinidad it has been observed flying over bushes, shrubby savannas and forested hills. In general it seems to prefer wooded and mountainous terrain.

Like its congeners, it feeds mainly on arthropods, although it is unknown which groups in particular make up its diet.

In Trinidad, a nest was recorded in May, which consisted of a shallow cup, built with sticks and cemented with saliva on a vertical wall. Their lay size is probably 2 eggs.

Individuals are frequently seen alone or in mixed flocks with other species of the genus Chaetura. Commonly forages on jungle or mountainous terrain. When it is at rest or in the nest it commonly produces a sound similar to a rattling or by the movement of its wings.

Some authors suggest that it forms a superspecies with C. vauxi and C. pelagic, while some others consider that these taxa could form a single species. Previously considered conspecific with C. viridipennis.

In the international field, it is considered a kind of minor concern.