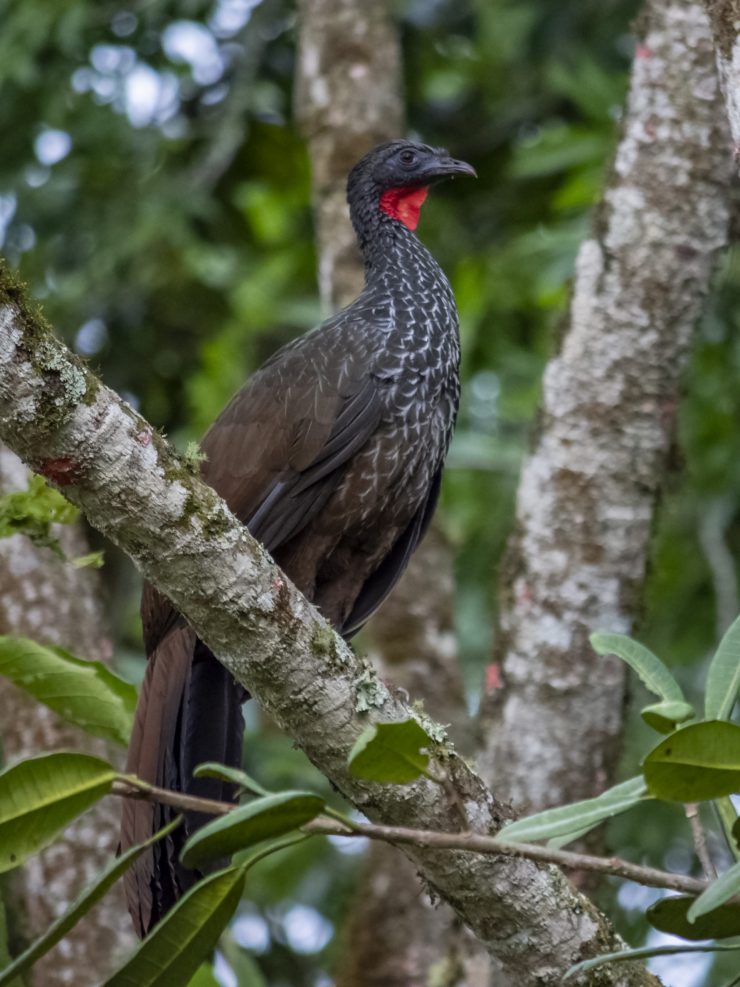 Its name comes from the Greek Penelops which means type of duck with stripes and from the Latin perspicax, which means sharp sight.

Relatively large turkey 76 cm in length. It does not present a marked sexual dimorphism; Among its distinctive characteristics is the blue facial face and the head, neck and in the upper region of the back, gray-brownish color. The lower part of the back and the tail are of intense brown color. The breast is gray-brownish scaly with whitish edges. It has a showy tail of deep red color.

It resembles the Crested Guan (Penelope purpurascens), but differs from it, because P. purpurascens is larger (91 cm in length), the chest is more striated than scaly and the posterior parts are olive in color, unlike chestnut. It can also be confused with the Andean Guan (P. montagnii), but it is smaller (61 cm long), the wings and tail are brown and the tail is smaller.

It is an endemic species of Colombia, found in the Departments of Cauca, Quindío, Risaralda and Valle del Cauca. It is restricted to areas of the Andean region at altitudes between 1300 and 2000 meters above sea level (although there are some records below and also above these altitudes), on the western slope of the central mountain range and on the eastern slope of the Western Cordillera, and it has been observed a few times on the western slope of the Cordillera Occidental. Historically it was found in dry forests of the Cauca, Dagua and Patía rivers.

They are found in humid and cloudy forests. In a study carried out during 2002 and 2003, in the Otún Quimbaya Fauna and Flora Sanctuary, it was found that P. perspicax inhabits all types of vegetation cover in the reserve, suggesting that it may be a generalist species; although it was observed more frequently in the larger wooded area, with less intervention.

It is a generalist species, which feeds mainly on a wide range of fruits and small invertebrates in a smaller quantity. Among these, Yarumo (Cecropia sp), strawberry (Solanum sp), Platero (Dendropanax sp), Cuchraro (Ardisia sp), Uvito de monte (Cavendishia sp), Cafeto (Faramea sp and Guettarda sabiceoides) fruits have been recorded. , Higueron (Ficus sp and Ficus obstusifolia), lemongrass (Siparuna aspera), Chagualo (Clusia sp), Guamo (Inga sp), among others. In the Otún Quimbaya Fauna and Flora Sanctuary, it was observed that in the time of scarcity of fruits in the interior of the forest, this species is concentrated in the crops of Urapán, where it feeds on its leaves.

Apparently, it reproduces throughout the year, although several nests have been observed, which coincide with the two wettest peaks of the year, which usually occur in the Andean region (April and October). In captivity, at the Cali Zoo, postures were observed throughout the year, with peaks in April and November (rainy months). In captivity, courtship displays that correspond to flapping, buzzing of the wings and songs by the male towards the female, precede copulation and the laying of the eggs by a few days. Despite this, there is no clarity regarding the meaning and dynamics of these displays and the formation of a couple, because they have not been studied. There is very little information regarding the nests (until 2005, only three had been documented); All the nests observed had two eggs, located on a circular platform, made of dry leaves, at a height of 1 to 1.8 meters above the ground. The incubation period is at least 21 days, although in reality it is not certain. The chicks are precosial, that is, they can leave the nest just after being born and remain for a long period with their parents until they reach their color and size.

Normally it is a solitary bird, however, congregations of up to 30 individuals can be observed in the Urapán crops, although this does not mean that they circulate in groups, they are simply localized congregations, due to the great offer of a certain resource. During the breeding season, they form pairs, and sometimes it is possible to observe two adults together with one or sometimes two juveniles. They are generally found in the middle and upper part of the trees and rarely go down to the ground

It is classified as an endangered species, especially because it has lost more than 95% of its habitat, its current potential range is less than 750 km2 and it has been estimated that its original range was 24,900. km2. Another factor is the pressure exerted by hunting. Several small populations have been achieved to protect in different protected areas, allowing, in part, the recovery of their populations. Also, there have been breeding programs carried out by the Cali Zoo, which have been quite successful. To protect this species, it is necessary to increase the density of its populations, to reduce its vulnerability, through effective controls in the protected areas and if it is possible to increase the forest cover, and in this way to sustain larger populations. In areas such as Ucumarí (Risaralda), Bermen (Quindío) and the Rio Barbas (Quindío), it is necessary to create biological corridors to facilitate genetic exchange.